Thousands of students have taken part in school strikes and demonstrations around the country today in protest at what they say is Government inaction on climate change.

In Dublin, thousands of students from schools across the capital met at St Stephen's Green and marched to Leinster House to hold a rally.

The strikes and demonstrations are part of a global movement ignited by 16-year-old Swedish student Greta Thunberg, who initiated Friday protests outside the Swedish parliament eight months ago.

The main Irish actions were organised by a loose coalition of second-level students from schools in the Cork and Dublin areas.

However, students from schools in many towns around the country also held local demonstrations.

Minister for Communications, Climate Action and Environment Richard Bruton met protesters in Dublin and paid tribute to their "passion and engagement". However, demonstrators said they want action not words.

Today, students around the country held protests as part of #FridaysForFuture and #SchoolStrike4Climate. Here's @emma_okelly with more. pic.twitter.com/towO4F7QON

More:
Greta Thunberg inspiring a real climate for change
Why young people are striking for climate action
Save the world from global warming, say Irish students 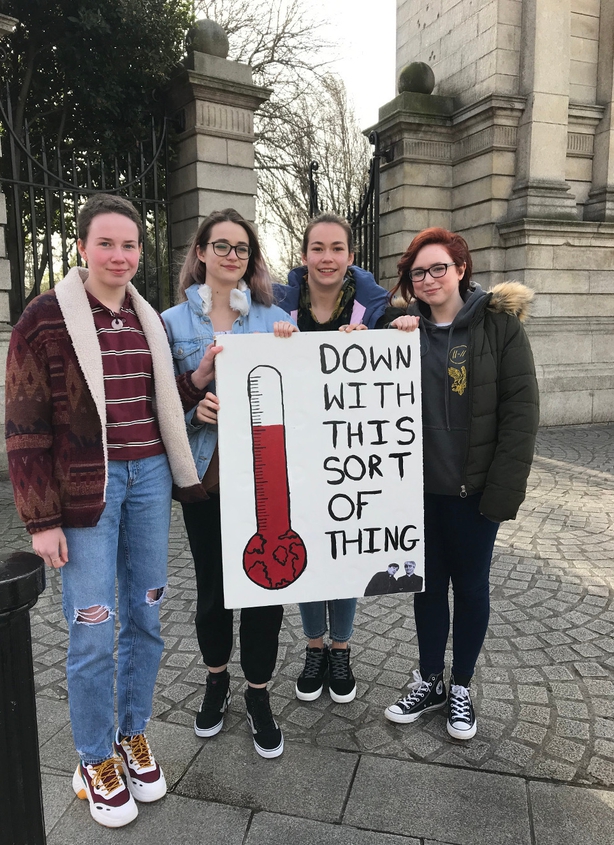 School pupils from Ireland and around the world are going on strike today. Here's why... pic.twitter.com/YjicYW3EpK

Second level students outlined a number of demands that they are making of the Government.

They want the Government to ensure that all fossil fuels are left in the ground, and that it bans the building of any new fossil fuel infrastructure.

They want Ireland to use 100% renewable electricity by 2030.

The students also want the Government to declare a climate emergency, and to communicate the severity of the ecological crisis to the general public, including school students through reform of the education system.

Students are demanding that the Government "takes its responsibility seriously" and avoids placing the burden of moving to a sustainable society on citizens alone.

Thousands of students participated in school strikes as part of a march and rally in Cork, calling for the Government to take action on climate change.

Traffic was diverted away from the city centre while the march was in progress.

In Tullamore, some students from second level schools in the town downed pens and meet outside Offaly County Council buildings in the town.

Referring to the cutting and burning of turf, sixth year student at Sacred Heart School in Tullamore, Muireann Carton told RTÉ News that climate and political action was especially important in the midlands.

"You have to acknowledge the tradition and history of turf cutting. Our economy is dependent on it, and it gives an awful lot of jobs to young people. But I’d really like to see a sustainable alternative", she says. "You have to look to the future."

Protests were held in Ennis, Co Clare and Lifford in Co Donegal, for instance.

Some schools principals wrote to parents this week in an attempt to encourage students to stay in school today with some schools organising consciousness raising events to take place with this aim in mind.

The principal of one Dublin school, Loreto College in Dalkey, wrote to parents requesting that they "consider very carefully" requests from daughters to attend the protests "particularly if your child is in a Junior Cycle Class and is going to town unaccompanied".

Robert Dunne told parents in the letter that while he admired and supported student activism in response to global issues, he was "conflicted" by the issue because it entailed school walkouts.

The Irish walkouts and demonstrations are part of a global day of action expected to involve school students in almost 100 countries.

Ireland’s largest trade union, SIPTU, has expressed its support for the school strikes.