Taoiseach Leo Varadkar has said there is enormous hostility across the EU to any extension to Brexit adding that some had lost patience with the UK.

Arriving at the EU summit in Brussels Mr Varadkar said in the event of no-deal there would be no transition period for the British government.

He said there would be no bilateral negotiations between the next UK prime minister and other European capitals on the Brexit issue.

His comments come amid speculation that the new prime minister, most likely Boris Johnson, would seek to influence national capitals on getting changes to the backstop before visiting Dublin.

Mr Varadkar said: "Negotiations can only happen between the UK and EU, we're not going to allow negotiations to move to an intergovernment level in any way…, the Withdrawal Agreement is not going to be reopened, but we're willing to consider amendments to the political declaration."

Asked about a further extension to Article 50, the Taoiseach said: "There is very much a strong view across the EU that there shouldn't be any more extensions. While I have endless patience some of my colleagues have lost patience, quite frankly, with the UK and there's enormous hostility to any extension."

Mr Varadkar welcomed the publication of the so-called Mapping Exercise on North-South cooperation by the European Commission.  The report reveals the breadth and scale of North South cooperation which could be disrupted by Brexit.

"That cooperation is so much deeper than trade issues," the Taoiseach told reporters, "and it really sketches out what the Good Friday Agreement is all about.

"When we talk about avoiding a hard border and protecting the Good Friday Agreement it's not the same thing. It's both of those things that we seek to protect."

Mr Varadkar said he continues to back Manfred Weber as the new European Commission president since the political group proposing Mr Weber, the EPP, won the most seats in the European Parliament elections.

However, he said he was "very aware" that other parties did well so there would have to be compromise.

He played down expectations that there could be a decision tonight, suggesting another summit at the end of June might be required.

The Taoiseach said he wouldn't make a decision on whether or not to give Phil Hogan a second term as Ireland's commissioner until the election of the new Commission president and to see what portfolio Ireland holds.

EU leaders are meeting in Brussels for a two-day summit, amid signs they are moving closer to nominating the next president of the European Commission, as well as other top political posts.

The outgoing President of the European Council, Donald Tusk, has indicated increased optimism that a candidate to replace Jean-Claude Juncker as Commission President could be selected tonight.

However, other officials have cautioned that filling the top jobs remained an intensely political and difficult process.

The political family with the largest number of seats usually gets first call on nominating the new president.

The big groups of the centre-right and centre-left both lost ground, while the Greens and liberals, as well as eurosceptic parties, made significant gains.

As such, choosing candidates for the top jobs has been more complicated.

The centre-right European People's Party did win the most seats, but it is thought their candidate, the German MEP Manfred Weber, is not thought likely to win the support of the parliament, or of a majority of EU leaders.

However, there have been intense contacts in recent days between Mr Tusk and all 28 national capitals, as well as the political groups within the parliament.

He will talk to all 28 EU leaders today, while German Chancellor Angela Merkel and French President Emmanel Macron, who have been at odds on the issue, will meet ahead of the summit. 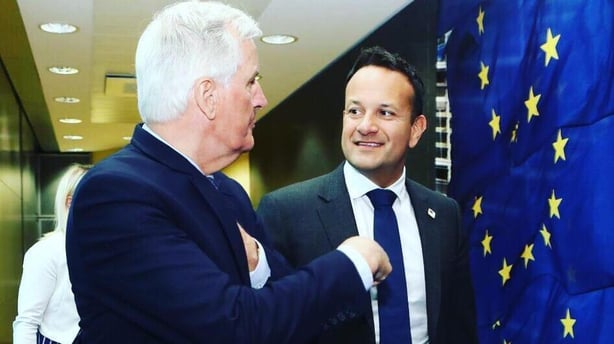 Taoiseach Leo Varadkar met the EU's chief Brexit negotiator Michel Barnier, who has been tipped as a possible commission president.

They discussed the state of play in the Brexit process and in particular the direction in which the Conservative Party is going in the midst of its leadership contest.