The European Union and AstraZeneca have failed to make a breakthrough over delayed Covid-19 vaccine deliveries, the bloc's health chief has said.

The EU is pushing the company to supply more doses of its vaccine from plants in Europe and Britain, after AstraZeneca announced delivery delays, adding to frustrations over the EU's inoculation programme.

The EU's health commissioner Stella Kyriakides said there was a "constructive tone" during the meeting with AstraZeneca chief executive Pascal Soriot and the EU's vaccine purchase Steering Board tonight.

The company held its third meeting with the European Commission and health officials from 27 member states.

"We regret the continued lack of clarity on the delivery schedule," Ms Kyriakides said in a tweet, adding that the EU was requesting a clear plan from AstraZeneca for the rapid delivery of the vaccine doses the bloc has reserved for the first quarter.

We regret the continued lack of clarity on the delivery schedule and request a clear plan from AstraZeneca for the fast delivery of the quantity of vaccines that we reserved for Q1. We will work with the company to find solutions and deliver vaccines rapidly for EU citizens.

The EU will ask AstraZeneca to publish the Covid-19 vaccine contract signed by both sides as the dispute deepens.

Officials said today that AstraZeneca's two UK plants making its coronavirus vaccine must share production with the EU under the contract the drugs firm signed with Brussels.

"Are we expecting the UK plants to deliver doses? The answer is yes," one of the EU officials said, briefing journalists on condition of anonymity.

A second official said AstraZeneca's two UK plants were the priority suppliers for the EU contract, followed by one in Belgium and another in Germany.

"Let's put the sequence there so you don't have doubts. There was no secondary, or I would say backup, role for those two plants," the official said.

The official added that AstraZeneca had announced a delay to dose supply to the EU amounting to just "a quarter" of what was promised.

That was "unacceptable," the official said, pointing to €336 million in EU funds that had been allocated to the firm for the vaccine production.

Explanations from the company for the delay had varied and the main one talking about a "yield problem" in one of the EU-based plants was unsatisfactory, the officials said.

"We are not told what the real problem is," one of the officials claimed. As AstraZeneca's other plants were unaffected, "their story is slightly inconsistent".

"The real issue is that we are not having clarity on the path ahead," the official said, adding: "Which plants are they going to use to fulfil the contract?"

Earlier, an EU official told Reuters that an interview given by the chief executive of AstraZeneca last night had revealed parts of the contract that were confidential.

The official said the pharmaceutical company had pulled out of a third meeting with the European Commission and member states due to take place today.

However, a spokesperson for the pharma giant said the meeting would go ahead.

The company was due to deliver 80 million vaccine doses in the first quarter, but told the EU last Friday that Europe would only get 30 million.

Officials have all but accused the company of delivering the full quota to the UK but not the EU.

AstraZeneca CEO Pascal Soriot told German and Italian newspapers that the UK had signed the contract with the company three months ahead of the EU and as such, supplies produced there went to the UK first.

Mr Soriot said the contract with the European Commission only committed the company to making "best efforts" to deliver vaccine doses to Europe on time, and that problems at its Belgian facility had held up supplies.

However, the EU does not appear to be buying that argument, saying that best efforts is a standard clause in any contract.

The logic of 'first come, first served' does not work in advanced purchase agreements, EU Health Commissioner Stella Kyriakides has said, as a dispute between the bloc and AstraZeneca over Covid vaccine supplies deepens | Read more: https://t.co/tOEkeGQpC8 pic.twitter.com/Df3L2BuLlS

Mr Soriot said last night that AstraZeneca would be producing 100 million doses per month and, in February, Europe would get 17% of this production, meaning, the shortfall was "not so bad".

He denied that Europe was being shortchanged and that supplies that were instead diverted to the UK. Doses produced in the UK would go under contract to the UK first, he said.

Mr Soriot insisted the contract signed with the European Commission only committed AstraZeneca to using its best efforts to meet delivery targets.

Earlier this week, it was announced that GPs in Ireland will be involved in the administration of the AstraZeneca vaccine from mid-February, when the community vaccination programme begins for those aged 85 and older first, followed by those aged 80-84, 75-79 and 70-74.

It is understood that Ireland expects to get around 200,000 doses of the AstraZeneca Covid-19 vaccine in February, if it is approved, instead of around 230,000 doses that were anticipated.

For the first half of March, the delivery is expected to be significantly lower than planned for, at around 100,000 doses.

Professor Kingston Mills, Immunologist and Director of the Trinity Biomedicines Science Institute has said the Irish Government's target of having vaccinated 700,000 people by the end of March is "certainly in jeopardy with the reduction of the supply of the AstraZeneca vaccine".

"Inevitably it's going to have an impact," he said.

However, the issues experienced by AstraZeneca are not unusual, he said, and there have been previous issues with the manufacture of vaccines for influenza.

Commenting on the manufacturing process, he said: "The AstraZeneca vaccine is a virus-based vaccine, so it's a non-replicating adenovirus vector vaccine, it's called. So you have to actually produce a virus that's used for the vaccine.

"So making a virus tissue culture and growing it is a complicated biological process and things can go wrong with it. Sometimes the yield of virus from a production run can be lower than they would have anticipated, and this seems to have happened in one of their plants in Belgium."

He said this was not AstraZeneca's own plant as they had subcontracted the production of this vaccine to many other CRO (Contract Research Organisation) type companies or other manufacturers, that have specialist ability in this area.

"It seems like the amount of vaccine they recovered from some of the batches was lower than expected and also some of the supply issue with some of the reagents that are required for producing the virus to make the vaccine."

Asked about delays in the supply of the vaccine, which is having a knock-on effect on roll-out across the EU, Prof Mills said: "Normally a company wouldn't start manufacturing on a large scale prior to the approval of the vaccine by the regulatory agency, because it may be that the product or vaccine mightn't be licensed.

"So normally they would wait for large manufacturing after it's been approved, but in the case of the Covid-19 vaccines, some of the manufacturers, because of their urgency, have started manufacturing it before getting approval and indeed AstraZeneca did that but didn't do it on a large scale and that's probably understandable."

The European Medicines Agency is expected to be able to authorise the AstraZeneca vaccine by the end of this week.

"So now they're waiting until Friday, and then they have the absolute green light indeed if the EU approves this to go ahead and produce at a very large scale if they need to," said Prof Mills.

"There are other manufacturers that could be bringing things onto the market which should hopefully make up for the shortfall in the AstraZeneca supply, but that... will be more likely to happen into March and April, rather than February." 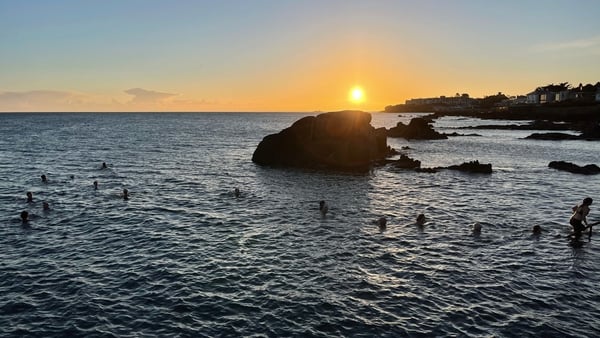