He was asked if people in the South should travel to Northern Ireland for Christmas, but said that this was not a time to be travelling and mixing.

If people needed a lesson how not to do it, he said, they should look at what happened after Thanksgiving in the US. And he said we did not want a repeat of that, "North or South".

Professor Scally told RTÉ's Six One News that multi-generational gatherings should be postponed to the Spring or better still, to the summer. "We should be keeping ourselves to ourselves", he said.

Earlier, Dr Scally said that the Irish and UK governments should ask families to postpone family gatherings this Christmas to the summer solstice in June.

As an incentive for people to keep their distance from families over the coming holiday period, he said told RTÉ's Today with Claire Byrne that two extra bank holidays should be offered in June 2021.

By then, he said, the vaccine rollout will have helped enormously.

Dr Scally also warned that you cannot play catch up with a virus when case numbers rise.

He said that it was no good implementing restrictions when numbers have increased and said that sensible restrictions should be in place at all times.

He said Ireland had been in such a good position in comparison to Europe in terms of bringing case numbers and deaths down. He said this was why restrictions should not be relaxed over the Christmas period.

The easing of restrictions is designed to allow people to have what the Government has described as a "meaningful Christmas". But people have been warned to maintain social distancing and to follow all public health measures.

Restaurants and pubs that serve food were allowed to reopen for outdoor dining on 4 December. But Dr Scally said it was his view that the hospitality sector was a big issue in keeping Covid levels down and that it should not have happened.

He said a relaxation of restrictions would mean an upsurge in cases. And he said that older people had already done so well in protecting themselves and by mixing over Christmas there could be a heavy price to pay.

He warned that there would be a "bumpy ride" ahead in the next few months.

Dr Scally, who is the President of Epidemiology & Public Health at the Royal Society of Medicine in London, also said he really worries about what will happen over the coming weeks and he is concerned there has been little discussion about travel.

Travel spreads the virus, he said, and ports and airports are really important. And he said that people should not be travelling in to Ireland unless they were prepared to quarantine.

Meanwhile, Deputy Chief Medical Officer Dr Ronan Glynn has warned that it will be a number of months before the Covid-19 vaccine would have a significant effect on how we manage the virus.

Speaking at the Oireachtas Health Committee, he said there was a real risk that "premature complacency" would set in over the next few weeks as people see hope on the horizon.

He warned that the vaccine would not come soon enough to have a positive effect at a population level, however he said it would have a beneficial protective effect for the people who get it first when it is rolled out.

Dr Glynn said that it does not matter whether a vaccine comes next week or the week after, people will be asked to continue with the basic measures to protect against the virus.

The message from NPHET would not be changing anytime soon, he said.

Northern Ireland's lockdowns were 'too little, too late'

The chairperson of the British Medical Association in Northern Ireland, Dr Tom Black said that it is very clear that Northern Ireland's lockdowns were "too little, too late" and that it is inevitable the health system is facing a nightmare scenario in the coming weeks.

Dr Black, who is a GP in Derry, said there has been a failure of leadership in Northern Ireland that has led to people "giving up" on public health measures and becoming complacent about the virus.

He told RTÉ's News at One that the inevitable outcome of the failure to use "clear and fair" messaging is now embedded in the health system, which he said will inevitably require assistance from hospitals in the Republic.

Dr Black said "the die is cast on this...and there is going to a nightmare within the health service in the next three to six weeks, we know that now".

He said that 4,000 vaccines have been made available in Northern Ireland but it will be six weeks before the effect of those will come into place.

He said that "we hope to have a handle on this" by the end of January, but may seek assistance from the Republic before then.

Speaking on the same programme, the Chief Operations Officer with the HSE Anne O'Connor said the HSE would "be open to discussing" any request to help patients from hospitals in Northern Ireland.

She said that a formal request on the matter would be made by Northern Ireland's CMO to the Republic of Ireland's CMO, Dr Tony Holohan.

Ms O'Connor said that, as they see an increase in cases in the community, "it's a matter of weeks, before that translates into issues in our hospitals and into critical care, so there is at time lag that we have to deal with".

The World Health Organization in Europe has urged families to wear face masks during this year's Christmas gatherings, as it warned about concerns for early 2021.

"There is a high risk of further resurgence in the first weeks and months of 2021, and we will need to work together if we are to succeed in preventing it," the organisation said in a statement.

It said that while it may feel awkward to wear masks around family members, "doing so contributes significantly to ensuring that everyone remains safe and healthy."

The UN health organisation said that while some "fragile progress" had been made, "Covid-19 transmission across the European region remains widespread and intense".

It urged the public "not (to) underestimate the importance of your decisions" and take extra precautions as many prepare to gather for the holidays.

If possible, the WHO said celebrations should be held outdoors and "participants should wear masks and maintain physical distancing".

For indoor festivities, the WHO said limiting the number of guests and ensuring good ventilation were key to reducing the risk of infection. 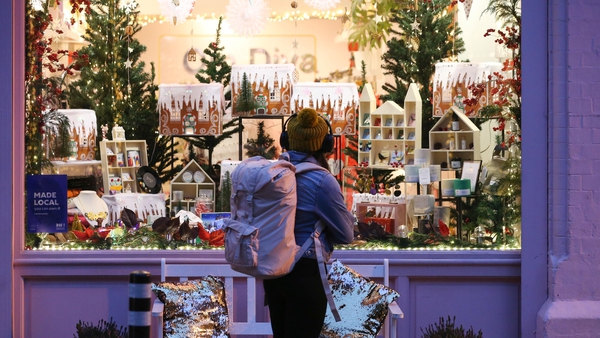 'All of our behaviour from now on matters' - Taoiseach