There have been 56 new cases of Covid-19 confirmed by the Department of Health, bringing the total number of confirmed cases here to 27,313.

There have been no further deaths from the virus. The death toll remains at 1,774.

The department said 79% of the new cases involve people under the age of 45, with 26 reported in Kildare and 13 in Dublin.

It said 35 of the cases are associated with outbreaks or are close contacts of a confirmed case, while 12 cases have been identified as community transmission.

Meanwhile, the National Public Health Emergency Team met this evening to consider further recommendations to Government to help reduce the spread of Covid-19.

Around 1,100 new cases have been recorded in Ireland in the last 14 days.

The number of new infections reported yesterday was 66, down considerably on the 200 cases cited on Saturday.

A significant reduction in outbreaks and community transmission was recorded last night.

As of 8pm last night, there were 19 patients with Covid-19 being treated in hospital. Eight of these patients are in intensive care.

A further 136 people who are suspected of having the virus are also in hospital, with seven of these patients in ICU.

Twelve outbreaks or close contacts of confirmed cases were reported, along with three cases of community transmission.

NPHET was due to consider further recommendations to Government, on protecting vulnerable people, continuing the resumption of normal health services and ensuring the safe reopening of schools.

Last night, Acting Chief Medical Officer Dr Ronan Glynn said that some people had been reckless and had undermined the effort of the majority of people.

Dr Glynn said the pandemic was not over, just because people were tired of living with it.

Meanwhile, a GP based in Kilcullen, Co Kildare, has said that she is concerned at the amount of coronavirus cases in the county, but that she has not seen an increase in positive Covid-19 cases in her surgery.

Almost a third of the new cases announced yesterday were in Co Kildare.

Dr Collins said she is concerned that people do not always understand public health guidelines around coronavirus.

She said self-isolation is a concern for them, however, and that it is important that even before a person with suspected Covid-19 presents themselves to a GP, that they self-quarantine.

Minister for Health Stephen Donnelly has said gardaí visited more than 3,000 premises over the weekend and 26 restaurants were not compliant with public health guidelines.

Health Minister Stephen Donnelly outlines the steps being taken by the Dept of Health and HSE to deal with the increasing number of Covid-19 cases pic.twitter.com/E7Nq4axDgi

Mr Donnelly said there has been some fatigue around public health guidelines but the next few weeks are so critical in the fight against Covid-19.

Stephen Donnelly: "Just right now, things are very finely balanced in terms of public health ... I would say the next three weeks is incredibly important." pic.twitter.com/81oLmdFnHe

He said there is a massive increase in testing and there will be a review in the testing turnaround times.

Mr Donnelly said the Nursing Home Expert Report will be launched tomorrow, which has 86 recommendations on protecting the vulnerable and elderly.

Foreign travel proposals will be formalised by the Department of Health and the Health Service Executive for Cabinet to discuss, he added.

Mr Donnelly said everyone needs to listen to the advice of public health doctors and the guidelines around tackling the coronavirus.

The minister said nothing has been discussed around restrictions in the three counties - Laois, Offaly and Kildare - being extended.

He said it was still intended that they will be lifted at midnight on Sunday.

A number of our recent cases/clusters were in congregated settings such as Direct Provision & Meat Processing Plants. We'll start serial testing people in DIrect Provision centres (about 7,500) later this week 1/2

A nationwide serial testing prog of Meat Processing Plants will also start this week. Serial testing already happening in nursing homes. Mass serial testing can help, but to suppress transmission each and every one of us must play our part to help protect ourselves & others 2/2 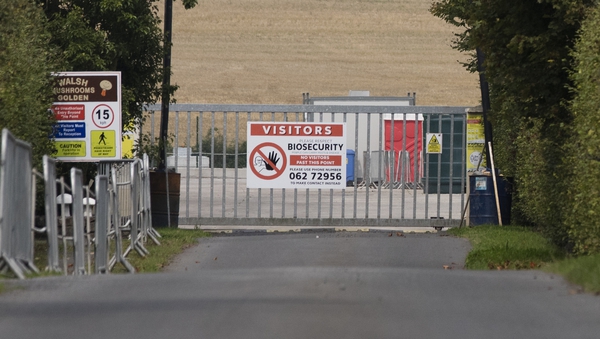 Level of asymptomatic cases at Walsh Mushrooms plant a 'concern'