US President Donald Trump has said that he did not criticise British Prime Minister Theresa May in an interview with the Sun newspaper.

The newspaper reported Mr Trump saying that a free trade deal with Britain might be impossible if the UK went ahead with Mrs May’s proposals for post-Brexit ties with the European Union.

However, speaking at a joint press conference at Chequers this afternoon, the US President said that he "didn't criticise" Mrs May and insisted he had "a lot of respect" for her.

Trump says he didn't criticise May in interview - says the only thing he asks is that there are no trade restrictions pic.twitter.com/Eky4Z7Ycym

Earlier, Mr Trump said his relationship with Mrs May was "very, very strong" after launching an extraordinary attack on her Brexit strategy.

He said he would discuss trade and military issues with Mrs May and said the relationship was very strong.

Speaking at Chequers, Mr Trump said he and Mrs May had "probably never developed a better relationship" than during last night's dinner at Blenheim Palace.

Seated alongside Mrs May at Chequers, Mr Trump said: "The relationship is very, very strong, we really have a very good relationship."

In joint press conference with Trump, May speaks of deepening cooperation between UK and US pic.twitter.com/6I1cgbnwXN

When asked questions about his interview with the Sun newspaper, Mr Trump made no response.

When asked by reporters if they had discussed the interview, Mrs May said: "We've got a lot to discuss," adding that they would discuss the so-called special relationship between the United States and United Kingdom, as well as the real opportunities for a trade deal.

However, in the newspaper interview, Mr Trump said Mrs May's plans for a business-friendly Brexit would leave it too close to the EU to allow a new trans-Atlantic trade deal to be struck.

Just hours earlier at a dinner to mark Mr Trump's first visit to Britain as president, Mrs May made a direct pitch for a deal with Washington.

She praised the friendship between the two allies, glossing over President Trump's previous remarks that Britain was a "hot spot" in turmoil over Brexit.

Referring to Mrs May’s Brexit proposals, Mr Trump told the newspaper, "If they do a deal like that, we would be dealing with the European Union instead of dealing with the UK, so it will probably kill the deal."

Read more:
Thousands in London to protest Trump visit
In their own words: Trump, May press conference

Mr Trump chastised Mrs May for ignoring his advice on Brexit and not making a credible threat to walk away from talks.

"I would have done it much differently," he told the newspaper. "I actually told Theresa May how to do it, but she didn’t listen to me."

Mr Trump's comments came at the end of a tumultuous few days for Mrs May, during which two senior ministers resigned in protest at her plans for trade with the EU after Britain leaves the bloc next March.

Mr Trump said that one of them, former foreign secretary Boris Johnson, "would be a great prime minister".

Mrs May's critics have said, however, that she reins in criticism of Mr Trump due to the strong desire of many in her Conservative Party to reach a trade deal with the United States after Brexit.

Mrs May's "business-friendly" Brexit plan would keep Britain in a free trade zone for goods with the EU but mean it had to accept some EU rules.

It was agreed by her cabinet only last Friday after two years of wrangling since Britons voted to leave the EU in the referendum.

Britain’s Queen Elizabeth walks around US President Donald Trump as they inspect the guard at Windsor Castle pic.twitter.com/2DWfIlTeMT 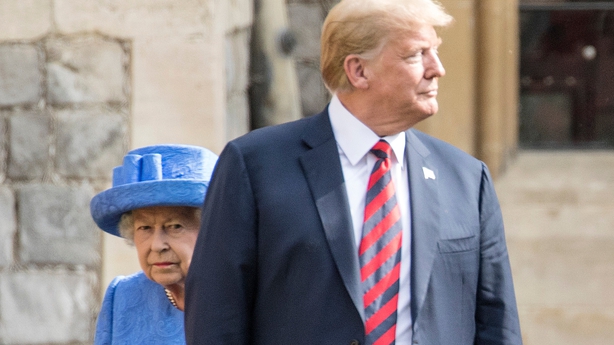 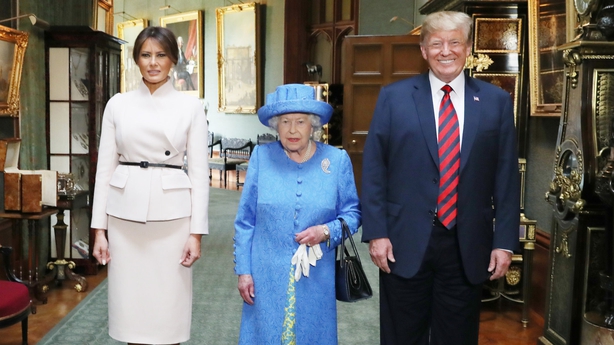 While Mr Trump's trip was not the full state visit he was originally promised, he was heralded by military bands on his arrival at Windsor, before he and his wife Melania had tea with the 92-year-old monarch.

As she waited for Mr Trump's arrival, the Queen glanced at her watch. At one point, Mr Trump halted abruptly and the queen had to walk around him while they were inspecting the guard.

He flew to Scotland this evening for a private trip, ahead of a trip to Helsinki for a summit with Russian President Vladimir Putin.

However, his arrival at his resort in Turnberry was met with a protest from the air.

As Mr Trump spoke with guests at his South Ayrshire property a microlight from Green Peace flew overhead.

A no-fly zone is currently in force in the area.

It circled the grounds with a banner message saying "Trump Well Below Par" before flying away. 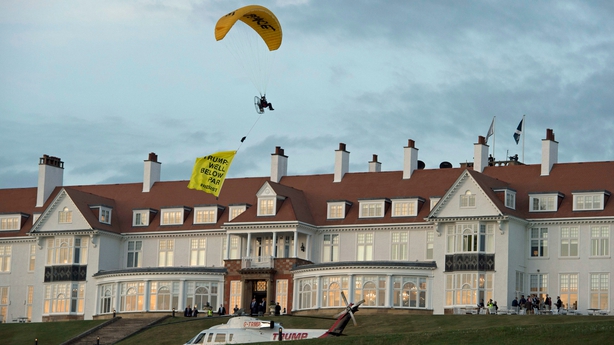 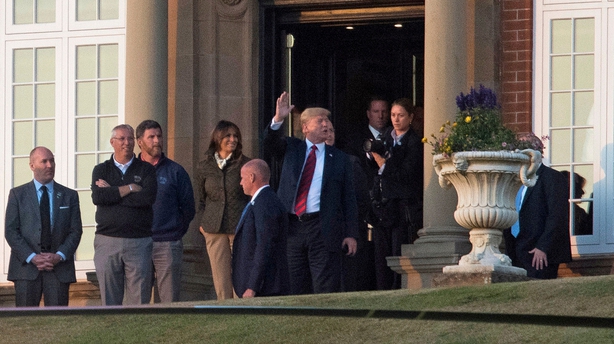 The US President also used the Sun interview to reignite his feud with London Mayor Sadiq Khan, who criticised him as "ill-informed" over a tweet following the London Bridge attack in June 2017.

Mr Trump also hit out at immigration into Europe, telling the newspaper: "I think allowing millions and millions of people to come into Europe is very, very sad.

"Take a look at the terrorism that is taking place. Look at what is going on in London. I think he has done a very bad job on terrorism.

"I think he has done a bad job on crime, if you look, all of the horrible things going on there, with all of the crime that is being brought in."

Mr Khan said it was preposterous for Mr Trump to blame a rise in violent crime in the city on immigration.

"The idea that you can blame this on immigration from Africa is I think preposterous and we should call him out when he does so," Mr Khan told BBC radio.