The Brexit Secretary David Davis has cast doubt on an agreement on the guarantee of avoiding a hard border being reached in June.

That is despite warnings from the Government and the EU that if there was no substantial progress by June the negotiating process was at risk.

Appearing before the European Union Select Committee in the House of Lords, Mr Davis also hinted that a hard border could be avoided by having monitoring infrastructure in place, but at a remove from the actual frontier.

The European Union 27 expect that the so-called "backstop" solution – Northern Ireland remaining in the EU customs union and large parts of the single market – be given full legal effect in the Withdrawal Agreement, the binding treaty that guides the UK out of the EU.

The first draft of the "backstop" in a protocol to be included in the treaty was rejected out of hand by the British Prime Minister Theresa May in February.

In March, the EU27 warned that progress on agreeing a legal text for the backstop would have to be made by the June European Council.

During his visit to Dundalk on Monday, the EU’s chief negotiator Michel Barnier said that while June was a "stepping stone", there was a "real risk" to the negotiations if there was no progress on the backstop.

London, however, wants to address the border through what are known as options A and B, in general solving the Irish border issue through the future trading relationship and through the use of technology and exemptions from EU customs checks.

Specifically, the UK has proposed a so-called "customs partnership" in which the UK would preserve the EU’s common external tariff and apply differentiated tariff rates on goods coming in from the outside world, but would then track goods bound for the EU (ie, Ireland) and reimburse Brussels for the difference.

According to the British government, this would allow the UK to avoid a hard border, and still permit it to pursue its own independent trade policy. However, EU officials have rejected this idea as unworkable. 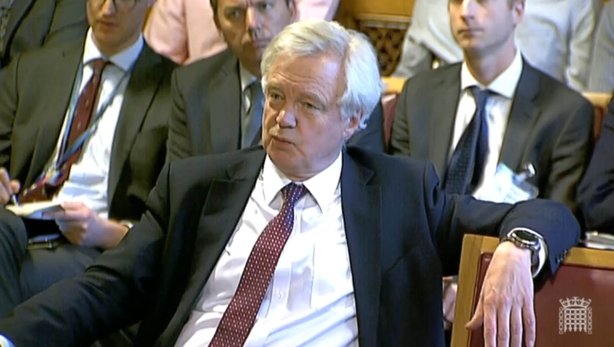 Davis: suggests you can have physical infrastructure, as long as it's not at the border.

The onus, say officials, is on the UK to come up with alternatives, but either way the backstop - also known as Option C - would be given legal effect in the Withdrawal Agreement.

EU and Irish sources say that only Option C can be enshrined in the treaty. However, London wants all three options to be given equal prominence.

"We take the view that you can address all three," Mr Davis told the Lords committee.

"It depends to a very large extent on what the substantive future economic partnership is. If we have a tariff free Free Trade Agreement (FTA) and a light touch customs agreement, that makes Northern Ireland very much simpler than if we don’t have those things. It’s all three we want, we don’t just want the one."

"If truth be told, I would consider it not a success if we fell back on Option C. I can see why the Irish Government want it as a guarantee, but we have to have all three. Whether we can do that by June I’m not at all sure. But we are aiming to do it by October."

Mr Davis strongly hinted that the UK foresees actual physical infrastructure, but remote from the border.

It was put to Mr Davis that Britain had committed, on a number of occasions, to there being no physical infrastructure.

Mr Davis interjected: "At the border."

Asked if the UK commitment to no infrastructure would exclude cameras, Mr Davis repeated: "At the border."

He added: "It doesn’t matter really what it is, a camera, a pole, a building, whatever… The existing border is done by intelligence-led policing and customs regulation, and that’s done via a variety of mechanisms.

"Intelligence comes from all sorts of sources, including ANPR [Automatic Number Plate Recognition] cameras back in Belfast. So, there’s a variety of mechanisms, but they don’t require border infrastructure."

Mr Davis told the committee that there were no trials, and there had been no planning, on technological solutions because the EU regarded the issue as part of the future trade relationship, and had refused to talk about such issues "until a certain point."

He added: "We haven’t been able to have that conversation."

Brexit: The return of the UK land bridge dilemma