As anticipated by the Tánaiste Leo Varadkar earlier today, the UK tonight announced further unilateral extensions to the grace periods governing the operation of the Northern Ireland Protocol.

The announcement came in a written ministerial statement laid before the House of Lords by David Frost, Minister of State in the Cabinet Office and the chief interlocutor on the Protocol.

It was obliquely worded. The UK had proposed a "standstill" arrangement on 23 July, whereby the EU would effectively pause its legal action over the UK's earlier breaches of the Protocol, and keep all grace periods in place.

While the EU announced on 27 July - somewhat unexpectedly - that it would pause the latest stage in its legal proceedings, the Commission did not promise to roll over grace periods indefinitely.

Despite that, in his statement tonight Mr Frost simply said the UK would "continue to operate the Protocol on the current basis", including the "grace periods and easements currently in force". 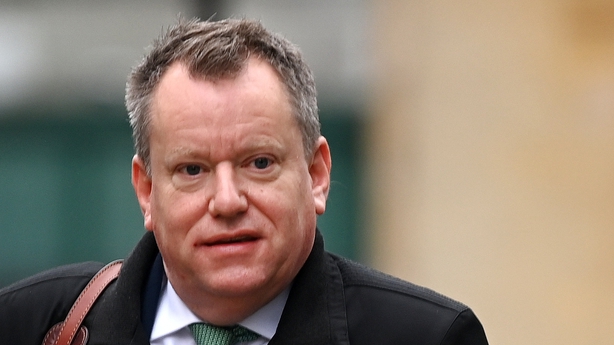 There was no mention of the word "extension" but that is what the statement means.

The European Commission was expecting such a move. Its muted response so far is part of a fresh strategy by Brussels and member states to avoid what some officials see as the trap of having endless deadlines, cliff edges and punch-ups with London.

Ahead of the announcement, officials and diplomats speculated that the EU would simply "note" any new unilateral extension, without triggering fresh legal action.

Indeed, at 19:41 Brussels time, the Commission’s spokesman Dan Ferrie tweeted a link to a statement which said that the Commission "take[s] note of the UK ministerial statement regarding the operation of the Protocol on the current basis, including the continuation of existing grace periods".

There was a stern reminder that the EU will not renegotiate the Protocol, and that it was a legally binding, international agreement, with obligations on both sides.

On 21 July the UK published its Command Paper, setting out what it sees as a necessary "rebalancing" of the Protocol.

The 22-page document amounts to a sweeping renegotiation: customs and agri-food checks and controls would only be necessary for goods entering Northern Ireland from GB that were clearly destined for the Republic of Ireland.

There would be a dual regulatory system so that goods produced in GB would be recognised in Northern Ireland (which remains part of the EU’s single market) and vice versa.

Medicines would be taken out of the Protocol completely, there would be no requirement for any information on goods entering GB from NI (except in extremely limited circumstances), and the European Court of Justice would no longer have any role in adjudicating on any issues that arose in relation to the application of EU law in Northern Ireland.

The EU’s response was (again) deliberately low key, but it was widely believed in Brussels and capitals that large parts of the Command Paper amounted to a root and branch re-writing of the Protocol.

There was what one diplomat described as a "very difficult" phone call between British Prime Minister Boris Johnson and the Commission President Ursula von der Leyen, and another less acrimonious, but still difficult call, between Mr Johnson and the German Chancellor Angela Merkel. However, following those phone calls there was what was described as "reflection" at the highest levels.

As well as issuing a muted response to the Command Paper, the Commission announced a few days later it was pausing the legal action against the UK.

"The Commission was deliberately very low key and restrained in its response to the Command Paper," said one diplomat familiar with discussions.

"The decision not to stoke things up with the [legal action] was all part of that approach. Basically the Commission wants to continue down the road of constructive discussion and an exploration as to whether there can be flexibilities and pragmatic solutions found to these implementation challenges."

A team of Commission officials travelled to London in mid-August to have technical talks with their opposite numbers. According to officials the mission was designed to test what exactly the UK intended with the Command Paper, how some of the ideas would work and - essentially - if there might be some way of bridging the gap between what the UK was demanding in the paper, and what the Commission and member states could reasonably accept.

But sources have been clear that the EU would be prepared to go beyond the package of flexibilities announced by the European Commission in June. The result of this reflection and change of tack is that there will not be the full-blooded confrontation at the end of September when the current grace periods were due to expire (indeed, tonight’s statement by the European Commission ensures that 30 September will not be the cliff edge that had been anticipated).

But Commission officials are adamant that the legal action remains paused, not abandoned. The strategy is to test how badly London wants a deal, and if Boris Johnson will accept further flexibilities that fall short of the Command Paper, but are more generous than what the Commission has offered so far.

A key element in this chess game is the question of risk: where does the gravitational centre of risk lie when it comes to non-EU goods entering Northern Ireland from GB then making their way south?

The Protocol was constructed on the basis that all goods entering the North were theoretically at risk of moving south unless a strong case could be made otherwise.

The UK has said that the risk is - according now to lived experience, nine months in - tiny; EU officials have said that because they have been denied access to the full range of data they cannot say for certain what the risk is, and that in any event, if there is a grey area on the EU’s external frontier then the market (and criminals) will adapt.

This is where the discussions will focus in the next months. But for now, talk of cliff edges are receding.