Was it wise or foolish?  A political masterstroke or a major own-goal?

As the first witness in Donald Trump's impeachment investigation gave evidence this week, the US President stood in front of TV cameras and admitted doing the very thing that was being investigated.

He said he was calling on Ukraine to look into the business and political dealings of Joe Biden and his son Hunter. He added that he thought China should also investigate the former US Vice President and his family.

Democrats immediately pounced saying this was a clear admission that Donald Trump was asking foreign governments to interfere in the electoral process by investigating a political rival.

The Speaker of the House Nancy Pelosi said it was the latest example of the US President putting his personal political gain ahead of defending the integrity of US elections.

The Democratic Congressman Brendan Boyle said President Trump was basically impeaching himself with his own words.

After the China comments, the Chair of the Federal Election Commission tweeted a reminder that it is against the law for anyone running for public office to solicit help from a foreign national. 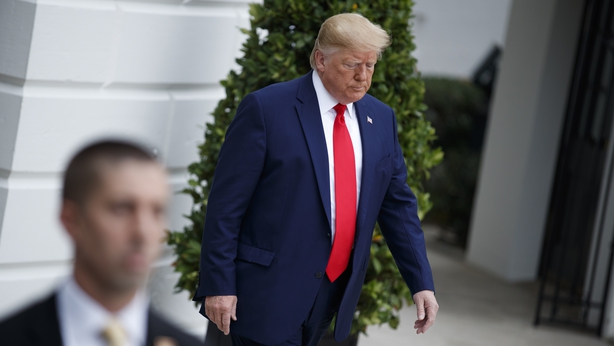 But for Donald Trump, this was not meant to be an admission of guilt.

His comments to reporters at the White House were designed to normalise this controversy.  To give the impression that there is nothing wrong with asking foreign leaders to investigate corruption.

In follow-up tweets he repeated this point.

"As President I have an obligation to end corruption, even if that means requesting the help of a foreign country or countries," he wrote.

"It is done all the time. This has nothing to do with politics or a political campaign against the Bidens. This does have to do with their corruption!"

As President I have an obligation to end CORRUPTION, even if that means requesting the help of a foreign country or countries. It is done all the time. This has NOTHING to do with politics or a political campaign against the Bidens. This does have to do with their corruption!

The Bidens have repeatedly denied any wrongdoing in either Ukraine or China and have dismissed Donald Trump's claims as disproven conspiracy theories.

Asking a foreign leader to investigate alleged corruption is one thing but offering them something in return is another matter.

Donald Trump has said that there has been no 'quid pro quo' with Ukraine or China, insisting he didn't offer those countries anything as a reward for investigating his political rivals.

He said any trade deal he agrees with China will be for the good of the country and not linked to a corruption investigation.

When it comes to Ukraine however, big questions were raised this week.

The former US Special Envoy to Ukraine, Kurt Volker testified before Congress as part of the impeachment investigation.

He handed over documents and text messages in which US officials appeared to discuss a White House visit and military aid for Ukraine in return for investigations.

In one message Kurt Volker wrote: "Heard from the White House - assuming President Z convinces Trump he will investigate/'get to the bottom of what happened' in 2016, we will nail down date for visit to Washington."

In another message Bill Taylor, a senior US diplomat in Ukraine wrote: "Are we now saying that security assistance and WH meeting are conditioned on investigations?"

Later he wrote: "As I said on the phone, I think it's crazy to withhold security assistance for help with a political campaign."

Gordon Sondland, the US Ambassador to the EU, replied: "I believe you are incorrect about President Trump's intentions. The President has been crystal clear no quid pro quo's of any kind."

It is that last message that Donald Trump and Republicans have seized upon as proof that the president did not offer anything in return for an investigation into the Bidens.

Donald Trump is now daring the Speaker of the House Nancy Pelosi to take this impeachment investigation to the next step with the White House threatening not to cooperate with investigators until she has held a formal impeachment vote on the floor of the House of Representatives.

Donald Trump knows it is a vote Democrats will probably win but he is confident that impeachment will be defeated in the Republican-controlled Senate.

In the meantime, more witnesses are expected to testify before Congress over the coming days as the impeachment investigation continues.

Final deadline for museum dedicated to the news