There was a breathless flurry in the British press this week about a breakthrough on Brexit.

The markets joined in, with sterling spiking to a three-month high against the dollar following remarks by Michel Barnier about an "unprecedented" trade and future relationship deal with the UK.

Pulses also spiked when it was reported that Emmanuel Macron would tell EU leaders in Salzburg next month that they should do a favourable deal with the UK on Brexit.

"French President Emmanuel Macron changes his tune and urges EU leaders to make a Brexit deal with Britain," was The Sun headline.

In the House of Lords EU Affairs Committee, Brexit Secretary Dominic Raab said he was "confident a deal is within our sights."

Within 24 hours however, the temperature had dropped. The patient was back to normal.

Michel Barnier told German radio that while the EU was working towards a positive outcome, they were also preparing for a no-deal scenario.

What Emmanuel Macron had actually described, at a conference of French ambassadors in Paris, was a Europe of concentric circles, because there was, he said, "room… for a broad Europe, room for a common market and, at the heart of this, room for enhanced cooperation and greater integration."

On BBC Radio 4’s Today Programme, the French European Affairs Minister Nathalie Loiseau expressed amazement that this had been construed as France having a change of heart, and at any notion that the UK could appeal over the head of Michel Barnier to EU leaders in Salzburg.

"First and foremost the unity of the 27 in the negotiation and support for Michel Barnier is extremely strong," she said.

"What the President mentioned during the conference of ambassadors earlier this week is something he had mentioned in the Sorbonne speech last September."

In conversations with several sources in Brussels, there was also surprise at how the Barnier and Macron remarks were interpreted. 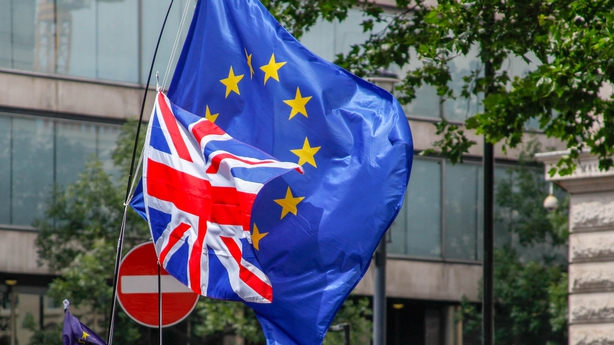 "He has always said want the UK as a close partner, and obviously it will be unprecedented, because there is not a single country in the world with whom we would have such deep cooperation, such a security partnership, and so on.

"Yes, it will be unprecedented, but he didn’t say we will give you unprecedented partial access tailor-made to the single market and we won’t mind setting aside our principles."

As we head into September, the assessment of EU officials and diplomats is that August has come and gone with little to show for it.

Yes, there has been the publication of over 50 technical notices on a no-deal Brexit, and a flurry of trips to European capitals by Theresa May, Foreign Secretary Jeremy Hunt, and Business Secretary Greg Clark.  But there has been no movement from London on the key issues, because the paralysis in the House of Commons still holds.

"Objectively in the British system nothing has changed," says one EU diplomat. "They’re still deeply divided."

As Fleet Street was trumpeting a change of heart on Brexit, the Japanese electronic giant Panasonic quietly announced it was shifting its European headquarters from the UK to the Netherlands.

In a statement the company blamed "potential fiscal obstacles by the application of different rules and regulations between the UK and EU."

So where do things stand?

There are just under seven weeks before the European Council in October.

In that time Theresa May will have to conclude the Withdrawal Agreement, and reach agreement on a political declaration on the future relationship that will sit alongside the divorce treaty.

On the Withdrawal Treaty there are three outstanding issues.

The first is on governance - how the EU and UK will resolve their differences in the future.

The second is on Geographical Indicators - will the UK respect some 3,000 sensitive EU products such as Champagne and Feta cheese and not start producing their own under those names.

The third, and biggest, obstacle is the Irish backstop.

The most recent proposal from London to replace to the European Commission’s draft legal text on the backstop dates back to 7 June.

It suggested a Temporary Customs Arrangement (TCA) and a UK-wide backstop that would expire around the end of 2020, when a new trade arrangement would – presumably – take effect.

London’s subsequent qualification of the TCA was that the Chequers White Paper would definitively rule out the need for the backstop.

That solution is not definitive enough for Dublin or the other member states. A backstop is still needed in the Withdrawal Agreement.

So, the deadlock remains.

According to three well-place sources, the European Commission has grown increasingly frustrated at London’s position on the backstop.

At the last round of talks between Michel Barnier and Dominic Raab on 14 August, sources described a heated discussion on the issue. 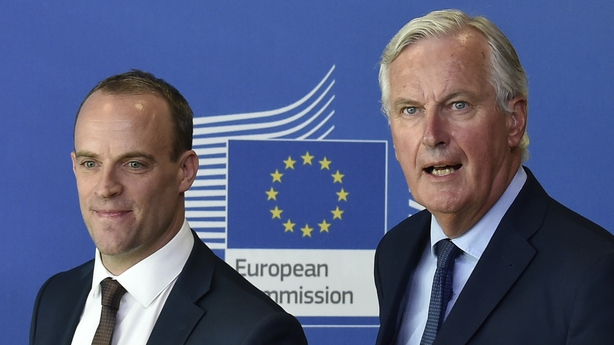 Following the negotiations, members of the Task Force briefed the Brexit Working Party, comprised of officials from the EU27 member states.

According to one source present, the Commission expressed concern that the UK was toying with the idea of holding out on Ireland till the last minute, and then trying to convince the EU that, if all the other elements of the backstop were in place, surely they would not opt for a "no-deal", and all the damage that would entail, simply to save Ireland.

"The Commission worries that that might be the fallback plan in London," says the source.

"It would be a case of London saying, ‘we clearly can’t work without anything, so we need a no-deal deal, which will help us bridge and face a no-deal, and that would look like the deal as it currently stands - minus Ireland."

That would also be unacceptable to Dublin.

There has been notable pressure from the Task Force on London in recent weeks, with Michel Barnier repeatedly saying that the backstop must be "de-dramatized".

By this he means getting London down from its position that the backstop violates the UK’s constitutional integrity, because it would require customs and conformity checks at Northern Irish ports on goods coming in from the rest of the UK.

To the Commission, and to other EU capitals, that de-dramatizing could happen if there is more transparency on what checks would be needed in the event of the backstop coming into play.

At yesterday’s news conference, Michel Barnier probed further, saying he had asked London to explore the nature of such controls. 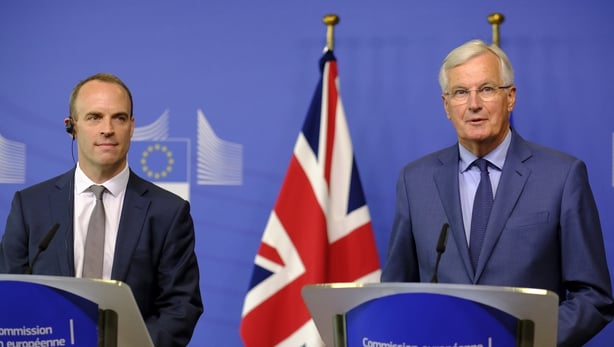 "We have to work on drafting an operational backstop," he said, "and for that I’ve asked Dominic [Raab] and his team to give us a certain amount of data which is necessary for the technical work which we need now on the nature, the place, where and how the necessary controls and checks take place."

Other member states appear to agree with this approach, as there is little hope that the UK will imminently come up with anything on the backstop that is credible.

"We need to explain better what the backstop is not," says one EU source close to the negotiations.

"Northern Ireland is already devolved and specific, and it can’t be that sovereignty rests on the standards for a light bulb."

But that is unlikely to fly with the DUP.

Diane Dodds MEP has frequently referred to the supermarket giant Asda, and how its chain of supermarkets in Northern Ireland relies on a just-in-time delivery system for food products, the majority of which come from Great Britain.

That system would be severely disrupted if there were customs and EU conformity checks, she argues.

One way out of the deadlock is that the political declaration accompanying the Withdrawal Agreement, will spell out in such generous and positive terms what the future trade relationship will be that it gives Theresa May just about enough political cover to convince the DUP and Brexiteers that the backstop – though conceded – will never be needed.

"That’s what the Commission is thinking," says a senior EU official.

"If we can accommodate presentation-wise the UK a bit more, be it with drafting the declaration in such a manner that May can claim that in the future framework, once agreed, we will end up with quasi-frictionless trade.

"Then she would be in a position to say, ok, I accepted the backstop, but it will never have to be used, because I am confident we will have such a high degree of customs facilitation."

All this is, however, predicated on the Chequers plan – with its convoluted customs facilitation ideas – surviving a further mauling as we get closer to the Tory Party Conference at the end of September.

As I’ve written before in this blog, the EU thinks the Chequers plan is riddled with unworkable demands, but that it is a vehicle – a harbinger – of a proper discussion.

But while the paralysis in Westminster continues, nobody would bet on Chequers – or even Theresa May – surviving the next eight weeks. In a nutshell, the EU might help Theresa May with a generous political declaration alongside the Withdrawal Agreement; but only if she can keep the Chequers plan afloat.

Even then, there are other pitfalls.  The political declaration is just that: an aspiration, and not a legally binding text.

But it won’t be done overnight.

"Time is running out," says another EU source. "We can’t do the future relationship – the political declaration – in a heartbeat.  It’s everything that the EU is. It doesn’t need to be entirely detailed, T’s crossed and I’s dotted.  But it needs to be clear about what we mean by our future relationship."

All this suggests a frantic and febrile few weeks, with the Tory Party Conference waiting to detonate in the middle of it.

In this climate, there is a prevailing suspicion that Ireland will come under pressure to shift on the backstop.

On 20 July there was a telling moment at the General Affairs Council, the formation of EU European and Foreign Affairs ministers, which it met to discuss the Chequers plan.

According to Reuters, the Polish minister Konrad Szymański, who was the first to speak, told the meeting that the EU may have to choose between Ireland and no-deal.

According to a number of sources present, there was a stunned silence when he made the intervention.

Ironically, the effect was to stiffen the resolve of other member states in supporting Ireland, so that ministers from countries like Lithuania – who had not intended to intervene – decided to do so.

"I think in the end from an Irish perspective it worked out pretty well," says the (non-Irish) Brexit negotiator from one member state who was present.

"The Polish minister started to make his comments, and then all the others said no, we’re all behind Ireland, particularly the French and German ministers.

"In the end it reinforced the message that Ireland could count on our solidarity and I think also for the Polish themselves, they probably felt they could have expressed themselves a little differently."

As we enter the final critical phase, Dublin will increasingly rely on such support holding firm.

But given the potential for so many things to go wrong, and the fact that no matter which artful, elaborate formula is agreed – if indeed there is agreement – Theresa May will struggle to get it through the House of Commons.

The endgame is perilously hard to predict.