(1) Key knowledge about changing climate has been strengthened

We see more and more changes emerging in multiple aspects of the climate system. It is not simply that the global surface temperature is rising: there are also a whole host of changes in our oceans, the frozen planet and the behaviour of plants and animals that together provide a compelling evidence basis. These point unambiguously to a world that has rapidly warmed.

Furthermore, improved understanding of longer-term changes from sources such as tree-rings and ice cores, point to the highly unprecedented nature of the recent directly observed changes. The climate we are living in today is unseen in at least many thousands of years. It is probably in a state unseen since 125,000 years ago, the peak of the last interglacial when alligators roamed Trafalgar Square in London. We have arguably already moved the climate system beyond the state in which we have evolved from hunter gatherers, through to modern society.

(2) Humans are indisputably responsible for these changes

The best estimate of the human contribution to global surface temperature changes since the late 19th century is that humans are responsible for all of it. Human fingerprints are all over the proverbial crime scene – we have pinned the responsibility for the recent changes in many aspects of the climate system more firmly than ever on human activities.

So much so that, for the first time, IPCC has assessed human influence as an accepted fact. Not only are we now able to pin humans as the cause of long-term changes, but IPCC also concludes that human influences are present in numerous extremes we are experiencing - most notably heatwaves, heavy rainfall events and droughts. Human interference in the climate system is affecting both the frequency and severity of such events. 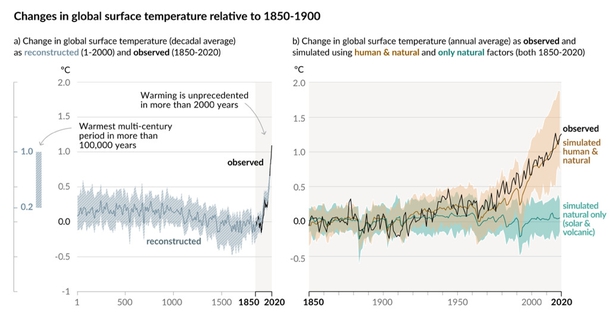 (3) No corner of the earth is unaffected by climate change

Yes, that includes us here in Ireland. In a typical year, Ireland is already one degree or so warmer than the late 19th century. Several events we have seen in Ireland in recent years - such as 2015's Storm Desmond, 2017's Donegal flash floods and the 2018 drought and heatwave - almost certainly have some human influences. We should expect that we will increasingly see further extremes and more pronounced changes with additional global warming and further warming. 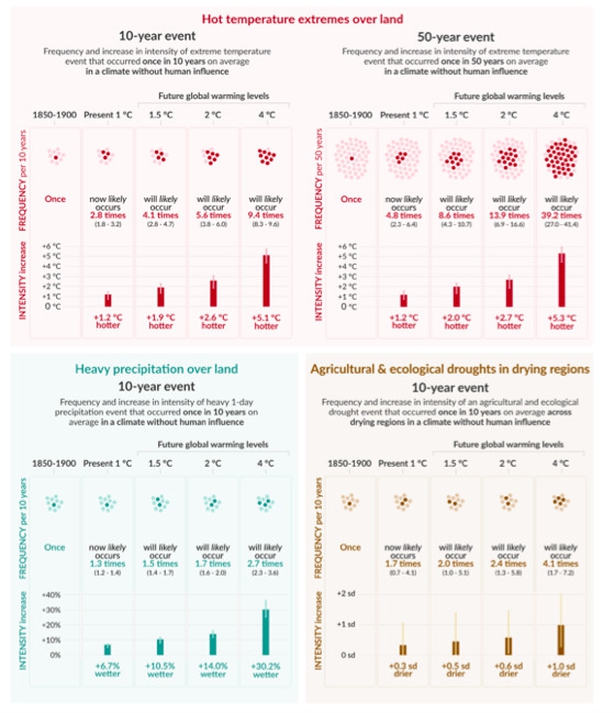 Some components of the climate system respond quickly, such as surface temperature and rainfall. Stabilising the concentrations of heat-trapping gases would mean that these aspects could be stabilised within our lifetimes.

Other aspects of the climate system, principally the ocean and the great ice sheets of Greenland and Antarctica, respond much more slowly. It will take hundreds to thousands of years for these to catch up with historical emissions. This matters for sea-level in particular.

Looking backwards to look forwards, when temperatures were last at the current level on a sustained basis, sea levels were 5-10m higher than present. The last time carbon dioxide levels were at present values they were 5-25m higher. The picture gets worse if we go back to historical analogues with higher carbon dioxide levels of historical surface temperatures. There will, undoubtedly, be massive challenges to future generations on our island as the sea levels rise. The sooner we act, the fewer challenges they will face.

(5) We won't be able to limit warming to 1.5 degrees without immediate global reductions in greenhouse gas emissions

The most recent decade was already about 1.1C above the late 19th century. In all the different scenarios considered in the report, 1.5C will likely be reached in the near-term (2021-2040). The scenario with very aggressive emissions reductions to be net zero by 2050, and net negative thereafter, limits the warming to 1.6C and returns temperatures to below 1.5C by the end of the century. It is only by reducing emissions to net zero by mid-century and subsequent net negative emissions that warming will likely be kept below 2C. 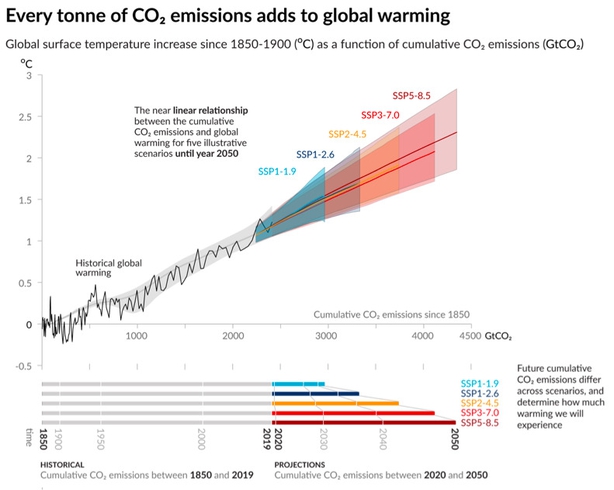 (6) Strong, rapid and sustained reductions in carbon dioxide, methane and other greenhouse gases are necessary to limit global warming

All greenhouse gases matter if we are to limit human-induced climate warming. In 2019, the three major greenhouse gases - carbon dioxide, methane and nitrous oxide - were 47%, 156% and 23% higher respectively than in 1750.

For carbon dioxide and methane, these increases are larger than those between successive glacial periods and interglacials over the past 800,000 years. The contribution of methane alone to current warming is about 0.5C. Carbon dioxide sticks around for a very long time whereas methane hangs around for a matter of decades. Aggressively addressing methane emissions is essential if we are to limit warming. Reducing methane emissions also has substantive air quality co-benefits for human health.

Finally, a real accent of the latest report is on risk. Low likelihood high impact outcomes which cannot be ruled out become progressively more likely with additional warming. The precautionary principle applies now more than ever. It is now up to us as a collective global society whether and how to act. The science is more crystal clear than ever that climate change is real, that its because of us, and that the future we determine for our children, grandchildren and future generations therefore lies within our collective hands.