The Department of Health has been notified of an additional 6,110 confirmed cases of Covid-19, while six further deaths have been recorded.

It brings the total number of deaths to 2,265, and the overall number of cumulative cases since the pandemic began to 107,997. 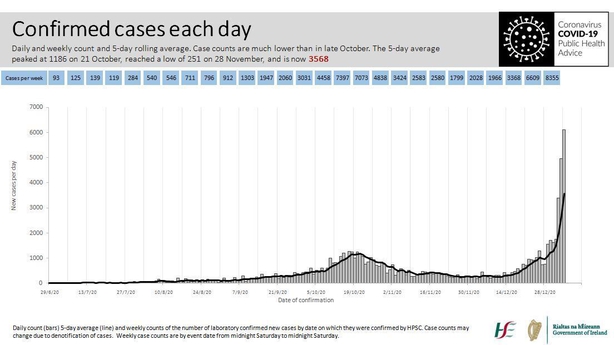 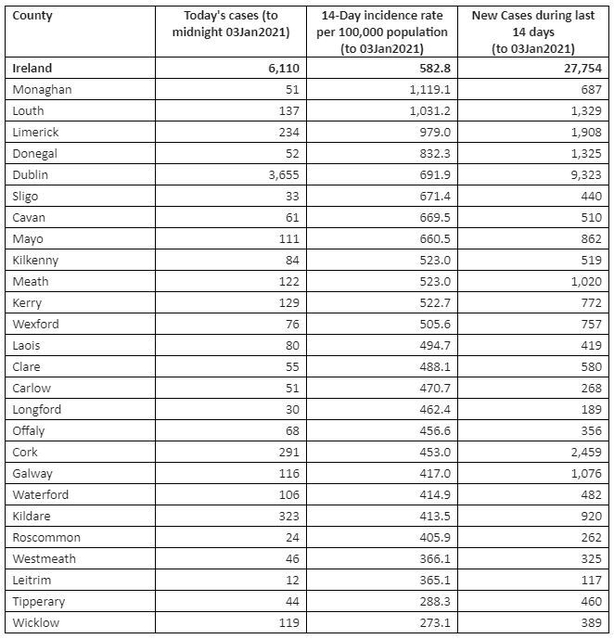 The number of people in intensive care with the virus rose to 70 earlier today, while the number in hospital stood at 776. There were 92 additional hospitalisations in the past 24 hours.

The largest number of patients recorded in hospital with Covid-19 during the pandemic here was 881, reported on 15 April last year.

Chief Medical Officer Dr Tony Holohan has said that if we are to suppress the virus and sustain essential services, then people have to limit their interactions with those outside their household. 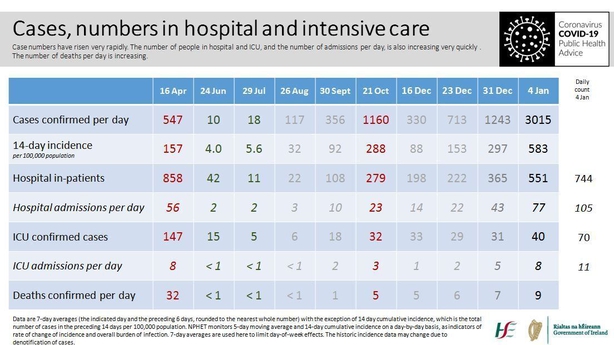 He said leaders in communities now must "support each other in the spirit of the public health advice".

Deputy Chief Medical Officer Dr Ronan Glynn added that the incidence of disease in the community "is now at a level where vulnerable people need to stay at home unless absolutely essential".

"If you have flu-like symptoms, it's unlikely to be anything but Covid-19 at this time. You must self-isolate."
Chief Medical Officer Tony Holohan says people have to limit their interactions with those outside their household. | Read more: https://t.co/lY7HZrLiOd pic.twitter.com/eS4oLXbDSC

The Chair of the National Public Health Emergency Team's Epidemiological Modelling Advisory Group, Professor Philip Nolan told the briefing that if people do not act now to radically reduce transmission, then by mid-January the country could face having 1,500-2,000 people in hospital, and 200-400 people in ICU.

Latest figures also show that the hospital system has around 40 adult intensive care beds available at this time. 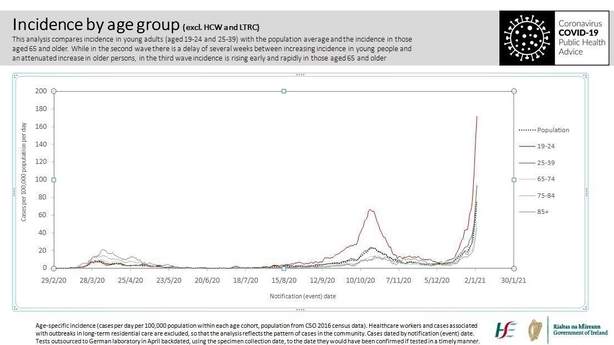 Professor Nolan said the situation is moving so fast, the seven-day averages "do not really reflect the situation". He said they have had 550 people in hospital on average over the past seven days.

He said there has been an average of 70-80 new admissions per day in the hospital system over the past week, but that was 105 in the 24 hours to 8am this morning.

Prof Nolan said the incidence in those of school going age is at or below the population average.

He told the briefing that in the past two weeks, there has been a high increase in the weekly incidence rate across all age groups. 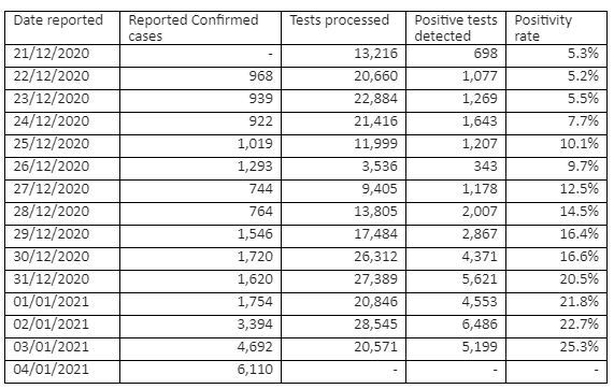 Chief Medical Officer Tony Holohan is concerned about the increase in incidence among those of a school-going age. | Read more: https://t.co/lY7HZrLiOd pic.twitter.com/FNKU1y1TX5

Dr Holohan said NPHET are concerned about the implications for the ongoing provision of education in the country.

He said while the level of cases at school-going level is still below the average in the population, this was increasing at a "very, very fast rate", adding that he was speaking to the Taoiseach about this today.

Dr Holohan also said NPHET was now calling for all employers to do all they can for their workers to stay safe, adding that employers should ask staff to come to work only if their work is necessary and their presence in the workplace is needed to do it. 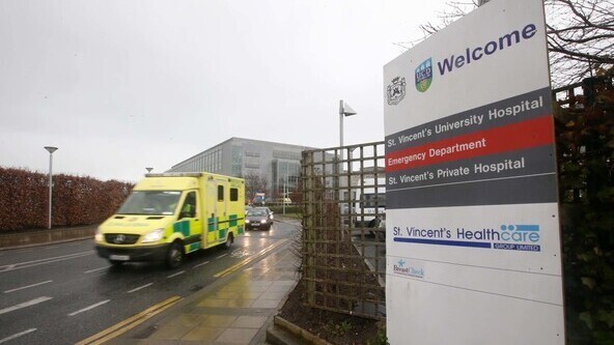 Meanwhile, the National Immunisation Advisory Committee (NIAC) has advised that Ireland should maintain the 21-day interval between the first and second dose of the Pfizer-BioNTech vaccine.

The advice was given to the High Level Task Force on Covid-19 today after a request the NIAC consider the matter, given developments elsewhere.

The NIAC said it will continue to monitor the evidence on the vaccination regime.

In Britain, in certain circumstances, the health service is allowing a bigger gap between the first and second dose and also a different vaccine for the second dose.

Earlier, the Chief Executive of the HSE said that work is under way to cease non-urgent care in public hospitals to cope with rising Covid-19 admissions.

Speaking this morning, Paul Reid said work will be done with hospital groups to cease non-urgent care and prioritise urgent care, which will help build capacity and reduce footfall.

Although hospitals are not in surge right now, he said, they do not want to reach that point.

In Northern Ireland, a further 1,801 cases of Covid-19 were confirmed over the past day, while a further 12 deaths have been recorded.

The roll-out of the Oxford/AstraZeneca vaccine has begun at GP surgeries across Northern Ireland, with 94-year-old Eileen Lynch among the first to receive it in Belfast.

Up to 11,000 people aged over 80 are set to receive the jab this week, and a batch of 50,000 doses has been allocated. Those aged over 80 will be prioritised initially.