"We can't allow the Good Friday Agreement that brought peace to Northern Ireland to become a casualty of Brexit," Mr Biden tweeted.

"Any trade deal between the US and UK must be contingent upon respect for the Agreement and preventing the return of a hard border. Period."

Earlier, senior members of the US Congress told the UK Foreign Secretary Dominic Raab that there will be no US-UK trade deal until they are reassured that there is no threat to the Good Friday Agreement.

Mr Raab is in Washington and held a meeting on Capitol Hill this evening with the Speaker of the House Nancy Pelosi and the Chairman of the House Ways and Means Committee Congressman Richard Neal.

Speaking after the meeting, Mr Neal told RTÉ News that Mr Raab offered clarity and said there was no consideration of a return to a hard border.

"I pointed out that I thought we'd been assured of that nine months ago in a protocol that had been signed and I questioned if we’d be having another meeting about reassurance in the future," he said.

"We both made our points but we also took the time to point out that until we are reassured, there can be no bilateral trade agreement between the US and UK if there’s any threat to the Good Friday Agreement," he added.

Following this evening's meeting, the Speaker of the House Nancy Pelosi said in a statement that they welcomed assurances from Dominic Raab but she reiterated her message to the UK government.

"If the UK violates its international agreements and Brexit undermines the Good Friday accord, there will be absolutely no chance of a US-UK trade agreement passing the Congress," she said.

Earlier, Mr Raab met with the US Secretary of State Mike Pompeo.

Pompeo confident UK will 'get it right' on Brexit

US Secretary of State Mike Pompeo has said the US trusts the UK on Brexit and that they will get it right when it comes to protecting the Good Friday Agreement.

Mr Pompeo was speaking following a meeting in Washington with the UK Foreign Minister Dominic Raab and was asked by reporters about the UK's attempts to amend the Brexit Withdrawal Agreement.

"I am confident they'll get it right. We've made clear the importance of the Good Friday Agreement.

"We know the complexity of the situation. We've done what we can to provide assistance where we can," Mr Pompeo said.

"In the end, this will be a set of decisions with respect to this that the Unted Kingdom makes and I have great confidence they will get this right in a way that treats everyone fairly and gets a good outcome for what it was the people of the United Kingdom voted for," he added. 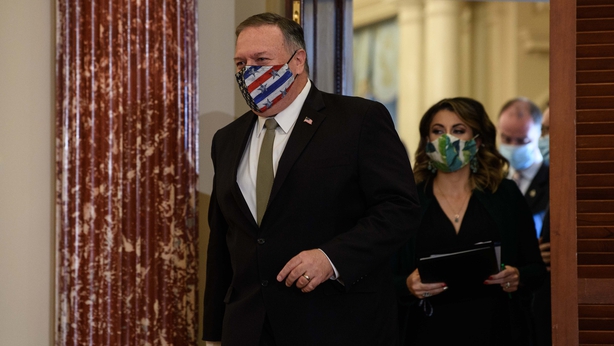 Mr Raab said his visit to Washington was a great opportunity to make it clear that the threat to Good Friday Agreement has come from the EU's politicisation of the issue.

He said the UK's commitment to the Good Friday Agreement and avoiding extra infrastructure on the border was "absolute".

"What we cannot have is the EU seeking to erect a regulatory border down the Irish Sea between Northern Ireland and Britain," Mr Raab said.

He also insisted he was confident of a post-Brexit free trade deal with the US.

"We discussed progress on our Free Trade Agreement negotiations since we last met, and the importance of a clean, resilient, economic recovery from COVID-19," he said.

"Like Mike we're willing on the negotiators, I think there's a huge opportunity for a win-win deal, and we're confident that we can get that."