The Department of Health has announced that eight more people have died from Covid-19 in Ireland, and 295 new cases have been diagnosed.

There have now been 54 deaths linked to Covid-19 in the country, with 2,910 confirmed cases of the virus.

The patients included five females and three males and six of those had underlying medical conditions.

The median age of those who died is 86.

Northern Ireland's Department of Health announced the death of another person who had contracted Covid-19 today.

Since yesterday, 123 new cases have also been confirmed in the North.

In total, 22 people have died after contracting Covid-19 and 533 people have been diagnosed with the virus in Northern Ireland.

Chief Medical Officer Dr Tony Holohan said: "We are beginning to see encouraging signs in our efforts to flatten the curve. However, we cannot become complacent as we are still seeing new cases and more ICU admissions every day.

"Our strategy remains the implementation of public health restrictions to interrupt the spread of the virus and prevent people from arriving to ICU in first place."

Dr Holohan said that the issue of travel into Ireland and on the island of Ireland will be given further consideration when the National Public Health Emergency Team (NPHET) meets again tomorrow.

Professor Philip Nolan, Chair of the NPHET Irish Epidemiological Modelling Advisory Group (IEMAG), said it was not possible to make a prediction on the surge of the outbreak at this time.

He also said there was no room for complacency.

Tánaiste Simon Coveney has said this evening that expert advice is not suggesting there should be tighter border controls to stem the spread of the virus.

Speaking on RTÉ's Claire Byrne Live programme, he said that the advice is supply lines need to be kept open and Irish citizens need to be allowed to come home.

He said the government is doing everything it possibly can to protect people from the virus and the evidence suggests that the restrictions on social distancing and movement are having an effect, but there will be some more weeks of the current regime.

He said he hopes people will be able to look back in six months and say this has worked.

Earlier today, the Government announced it had reached an agreement with the private hospitals association to use its facilities for the treatment of both Covid-19 and non Covid-19 patients.

Taoiseach Leo Varadkar said private hospitals have 1,000 rooms for solo occupancy, which are ideal for those who need to be isolated. 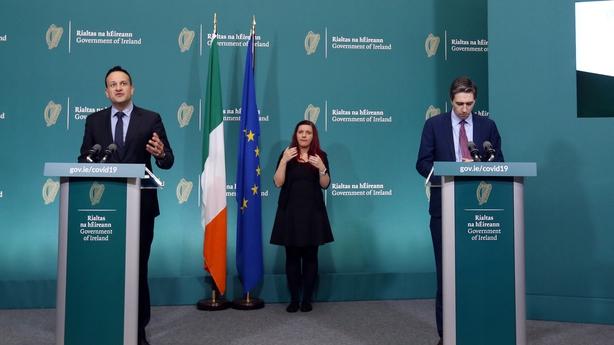 They can provide 194 ventilators, as well as the use of nine laboratories. Mr Varadkar said there were 19 private hospitals being used in the partnership.

Minister for Health Simon Harris said the partnership will represent a 17% increase in capacity for the Irish health service.

It comes as new data on Covid-19 from the Health Protection Surveillance Centre (HPSC) shows that there are 22 clusters in nursing homes and 19 in hospitals in the Republic of Ireland.

Mr Harris met representatives of Nursing Homes Ireland at the Department of Health to discuss the crisis.

New measures will soon be introduced for nursing homes to help contain the transmission of #Covid19. | https://t.co/XWnGbszxvE pic.twitter.com/MPOisE8p8K

He said that the National Public Health Emergency Team will consider measures tomorrow for nursing homes during the Covid-19 outbreak.

He said this area was a key priority given the number of clusters.

Meanwhile, around 205 civil and public servants have been redeployed to the Department of Employment Affairs and Social Protection to help process an "unprecedented" flood of welfare claims due to the Covid-19 virus.

In a statement, the department confirmed that it has also hired more than 100 temporary clerical officers since 2 March.

A small number of former department employees who now work in other government departments have been reassigned back to deal with social protection work.

RTÉ broadcaster Ryan Tubridy confirmed today that he has tested positive for Covid-19.

In a statement issued this evening, the Late Late Show presenter said: "Like so many other people in Ireland, I tested positive, but I was in the very fortunate position to have a very unintrusive experience, which I now have come to the end of." 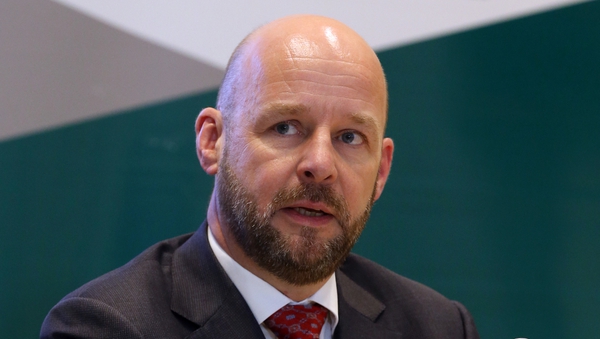