Tributes have been paid to Irish teenager Nóra Quoirin whose body was found in a rainforest in Malaysia earlier this week.

Prayers were said for the 15-year-old, who was born in London but travelled on an Irish passport, at a mass at her family's parish church in Clapham.

Speaking to RTÉ News, parish priest Fr Marcus Holden said the loss of Nóra was like a "great wound in the parish".

"She was loved by everybody," he said.

"When you have a girl like Nóra, she had special needs as we know, brought forth a lot of love from people, and her absence is like a great loss. People are devastated and heartbroken about all of this."

The head teacher at Nóra's school in Wandsworth, south-west London, paid tribute to her as "a delight to work with" and said her fellow pupils and others who knew her will be supported during a difficult time.

Nóra was also remembered in Belfast, where her mother Meabh is from and where her grandparents and other relatives still live. A book of condolence in memory of Nóra has opened there. 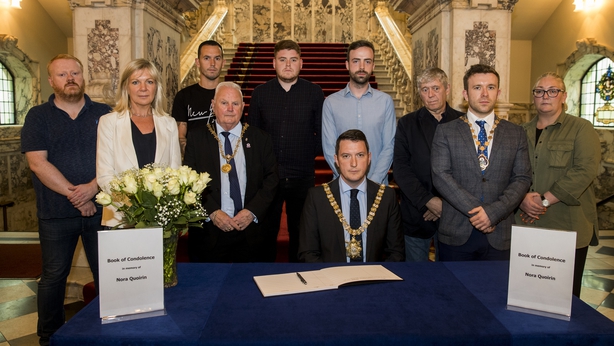 Police in Malaysia have said that the teenager died from complications arising from prolonged hunger and stress.

Four medical experts were involved in the post-mortem examination on her body, which began yesterday morning.

Officers said they had no evidence "for the time being" to say that Nóra had been kidnapped.

They said that she had died as a result of a ruptured intestine arising from her ordeal in the forest.

She was estimated to have been dead for up to three days when her body was found, investigators said.

They said there is no suspicion of foul play and there was no sign of sexual assault.

It came after a post-mortem examination on the 15-year-old's body by four medical experts.

Nóra was born with the brain defect holoprosencephaly and was described by her family as "vulnerable".

She was found dead on Tuesday, nine days after she had been reported missing by her family.

Her body was found unclothed by a stream in an inaccessible area of the rainforest about 2km from where she went missing.

She had been staying at the resort with her family, but her father reported her missing on Sunday 4 August.

An intensive search to find her ended on Tuesday after her parents Meabh and Sebastien identified her body.

Nóra's devastated family previously said their "hearts are broken" and paid tribute to her as "the truest, most precious girl".

They made an emotional statement, describing how the teenager, who lived in London and was the daughter of Irish-French parents, had "truly touched the world".

They said: "Nóra is at the heart of our family. She is the truest, most precious girl and we love her infinitely.

"The cruelty of her being taken away is unbearable. Our hearts are broken."

Hundreds of people were involved in the search operation and it was volunteer helpers who found the teenager's body.

The Quoirins said Nóra's condition meant she was not independent and had difficulty walking.

Describing her as a "very special person", they said she would not have gone anywhere alone.

Search crews looking for the teenager played her mother's voice in the dense Malaysian forest near where she disappeared.

Police had said Nóra was believed to have climbed out of her resort room window.