The owner of one of the most popular weedkillers on the Irish market has dismissed claims that one of its key ingredients can cause cancer after a US court ordered the pay-out of $290m to a terminally ill man.

Bayer, the German owner of chemical giant Monsanto, said today that the ingredient glyphosate - used in its weedkiller Roundup - is "safe".

"Bayer is convinced that glyphosate is safe and does not cause cancer," Bayer said.

Yesterday, a California jury ordered Monsanto to pay nearly $290m (€253m) for failing to warn a dying groundskeeper that its weedkiller Roundup might cause cancer.

Following eight weeks of trial proceedings, the San Francisco jury ordered Monsanto to pay $250m in punitive damages along with compensatory damages and other costs, bringing the total figure to nearly $290m.

Mr Johnson, a California groundskeeper diagnosed in 2014 with non-Hodgkin's lymphoma - a cancer that affects white blood cells - says he repeatedly used a generic form of RangerPro while working at a school in Benicia, California.

The lawsuit is the first to accuse the product of causing cancer but is a harbinger of a looming wave of similar legal challenges: observers say a Monsanto defeat likely opens the door to hundreds of other claims against the company, which was recently acquired by Germany's Bayer.

The lawsuit built on the conclusions in 2015 of the International Agency for Research on Cancer, a part of the UN World Health Organisation, which classified Roundup's main ingredient glyphosate as a probable carcinogen, causing the state of California to follow suit. 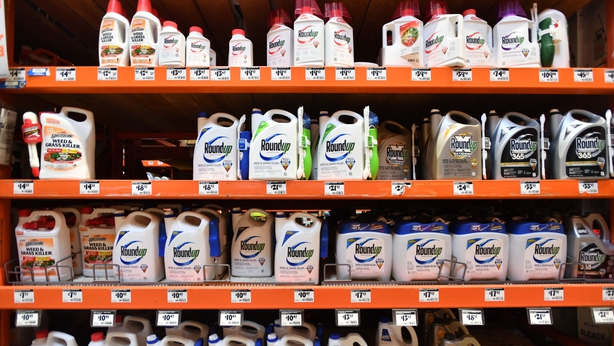 Meanwhile, Environmental group Friends of the Earth said that everyone that uses Roundup should review its usage in the light of the findings of the US court.

Director Oisín Coughlan said the case is a game changer and very significant.

He said they have always opposed the use of the substance because of its affect on pollinators.

Roundup is Monsanto's leading product and glyphosate is reportedly the world's most commonly used weedkiller.

Monsanto always denied any link to the disease and said studies concluded the product was safe.

The company's vice president, Scott Partridge, said hundreds of studies showed the herbicide does not cause cancer and said the company would appeal the verdict to "vigorously defend this product".

He said: "Roundup has been safe for four decades and will continue to be safe. There is no credible scientific evidence that demonstrates otherwise.

"It is completely and totally safe and the public should not be concerned about this verdict, it is one that we will work through the legal process to see if we can get the right result. The science is crystal clear."

In November 2017 the European Union approved the use of glyphosate for the next five years.

At the time, the President of the Irish Farmers' Association, Joe Healy, said it was an important outcome for farmers and for science.

The chemical has been used by farmers for more than 40 years, but its safety was cast in doubt when a World Health Organisation agency, the International Agency for Research on Cancer (IARC), concluded in 2015 it probably causes cancer.

In 2016, a joint report by the World Health Organisation and the UN said that, while there was "some evidence of a positive association between glyphosate exposure and risk of non-Hodgkin's lymphoma" in some studies, the only large study of high quality found "no evidence of an association at any exposure level".

It concluded that glyphosate "is unlikely to pose a carcinogenic risk to humans from exposure through the diet".