Road gritting is under way on main roads across the country as temperatures are set to plummet to -8 degrees overnight.

Met Éireann warned of an "extremely cold night". Temperatures of -2 degrees are expected, dropping to as low as -8 in parts.

It will be coldest in east Connacht, Leinster and Ulster.

Met Éireann has warned of slippery paths and treacherous roads due to snow accumulation and ice.

A spokesperson for Transport Infrastructure Ireland has said a fleet of vehicles will be operating throughout the night, gritting the national road network.

Transport Infrastructure Ireland has a fleet of 680 vehicles, including snow ploughs and salters, and the majority of them will be working overnight.

AA Roadwatch said the roads worst affected by snow, ice or slush are in Galway, Roscommon and Mayo.

Gardaí in Roscommon and Galway are advising motorists to avoid making any unncessary journeys.

Gardaí in Mayo said drivers should slow down and drive with care.

Gardaí warned that extreme caution is needed on all routes, particularly those that have not been treated with grit or salt during the day.

In Co Mayo, national primary routes are passable but with temperatures already below zero, compacted snow, slush and water has now started to freeze.

Motorists should be especially vigilant to the danger posed by black ice.

The R330 between Westport and Partry is extremely icy this evening. Conditions are also said to be poor on the R312 between Castlebar and Bellacorrick.

The general advice is that drivers should postpone any non-essential travel tonight.

In Galway, extensive gritting and ploughing of national routes during the day will continue this evening.

The north and east of the county was worst hit by last night's snow. An increase in temperatures during the day led to a thaw in some parts but excess surface water will lead to problems as it gets colder tonight.

Snow falls of 2-4cms were reported in parts of Westmeath, Laois, Offaly and Roscommon today.

In Wicklow, the Sally Gap and approach roads in the area are impassable due to the snow and ice.

In Galway, the Loughrea/Ballinasloe Road is impassable in places.

The Leinster Club Senior Football Championship Final between St Loman's and Moorefield due to be played in Portlaoise this afternoon was postponed, while the Punchestown races are to go ahead.

Gardaí said most people seem to have heeded the advice to stay off the roads, with poor conditions in several areas following snow and heavy rain.

Bus Éireann said the majority of services were operating to schedule today.

Iarnród Éireann said all services were operating as scheduled, although with some delays on Dublin-Waterford and Dublin-Galway lines.

A spokesperson for the Department of Education and Skills has said schools nationwide will remain open tomorrow.

The Department is continuing to monitor the situation nationwide and will follow any advice from the National Emergency Coordination Group.

Conditions for pedestrians are hazardous in Mullingar and Athlone, and road conditions on local roads are described as dangerous.

Meterologist Gerry Murphy of Met Éireann said: "Significant snowfalls have affected parts of Connacht, Leinster and parts of north and east Munster, and that snow is continuing at the moment.

"As the snow clears south this evening, we're going to see very cold, clear conditions following behind it. So a very severe frost and icy conditions developing tonight on top of that lying snow. So tonight will bring very frosty and very treacherous conditions on roads."

The UK Met Office issued a yellow alert for snow and ice in Northern Ireland, with 2-5cm of snow forecast.

Motorists have been urged to drive with care given the treacherous conditions.

Gardaí in Westport said there were very heavy falls of snow there through the night.

Sligo had snowfalls overnight around Tubbercurry and Ballymote.

According to Sligo County Council around 60mm of snow fell in the south of the county overnight.

Gardaí in Leitrim are advising caution on the roads following overnight snowfalls. Carrick-on-Shannon, Mohill and Carrigallen are among the areas affected. 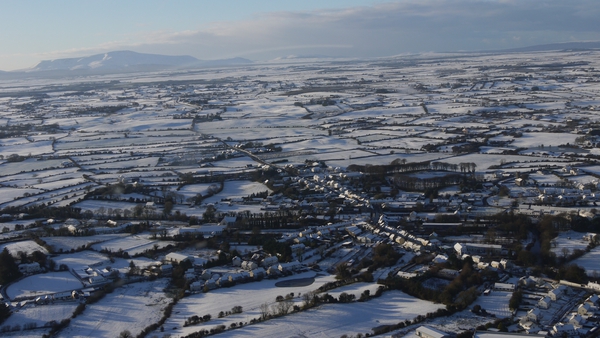