The Leinster club senior football championship final between St Loman's and Moorefield and the All-Ireland club SFC quarter-final involving Fulham Irish and Corofin have both been postponed due to adverse weather.

The Leinster final was due to be played in Portlaoise this afternoon, but has been postponed due to snow on the pitch.

Temperatures plummeted in Laois overnight and with significant falls of snow, the decision has been taken to call the game off.

The final will be rescheduled for Sunday 17 December in O’Moore Park with a 2.00pm throw in.

Corofin's clash with Fulham Irish in Ruislip suffered a similar fate with heaving snow in London making the pitch unplayable. 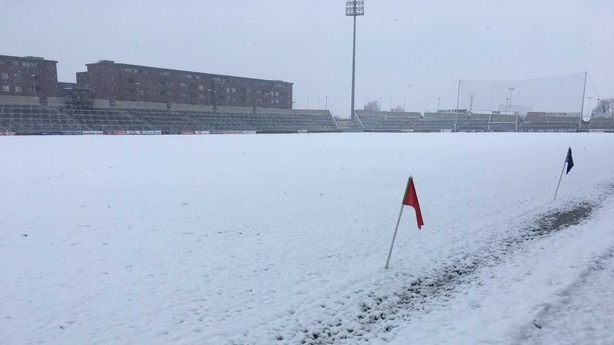 A Status Orange Weather Warning is currently in place for many parts of the country, with snow and ice in several counties, with Met Éireann saying temperatures could drop to as low as -8 tonight.

Met Éireann has forecast up to eight centimetres of snow in places by this afternoon, followed by icy conditions this evening and tonight.

In rugby, Saracens' Champions Cup match against Clermont-Auvergne has been postponed due to "adverse weather conditions" around Allianz Park, the Premiership club have announced.

There's better news elsewhere however as racing will go ahead in Punchestown, following a course inspection.

The course was found to be fit for racing and the fixture scheduled for today will go off as scheduled. The first of seven races commences at 12.30pm and the ground is currently heavy.

New date for the refixed match will be announced later in the week. #MatchOFF@FulhamIrish @CorofinGAA pic.twitter.com/7AyWdCC4tx