Four men have been charged with a number of public order offences in relation to disturbances in Ardoyne overnight.

Northern Ireland Secretary of State Owen Paterson has also condemned the disturbances in Ardoyne, which he said were "totally inexcusable".

More than 20 police officers were injured during the rioting, which followed the annual Orange Order 12 July parade through the nationalist area.

Mr Baggott has said police expect dozens more to be brought before the courts to face charges relating to the disturbances in the coming days and weeks.

He said boys as young as 15 had been involved in the disturbances.

The PSNI has said the cost of policing yesterday's Orange Order parades across Northern Ireland could run into the millions.

Water cannon and baton rounds were used by police as pipe bombs, petrol bombs, bottles and rocks were thrown by protesters following an Orange Order parade through the nationalist area.

Ten gunshots were fired at police lines in nearby Brompton Park, but no officers were wounded, as police officers attempted to keep the peace between nationalists and loyalists.

Petrol bombs and bricks were thrown at them from both sides. Three cars were hijacked and at least one was set alight.

Street violence also erupted in the south and east of the city and in the Bogside area of Derry.

The disturbances followed what was a largely peaceful day of parades across Northern Ireland marking 12 July.

Sinn Féin MLA for North Belfast Gerry Kelly called for a resolution to the contentious issue of loyalist parades.

"The bottom line with yesterday’s trouble in Ardoyne is that the Orange Order was intent on walking through an area where they are clearly not wanted," Mr Kelly said.

"They had walked the same route in the morning and enjoyed their cultural and religious celebrations throughout the day so creating a contentious return parade through the nationalist Ardoyne, Mountainview and the Dales areas was unwarranted and provocative.

"In the end, the residents of these areas had to deal with double the amount of parades and protests." 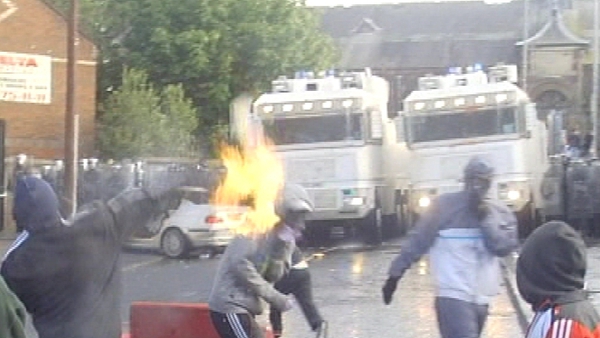