Nine police officers have been injured during clashes after an Orange Order march in Ardoyne today.

Water cannon and baton rounds have been used by police after a large number of petrol bombs, bottles and rocks were thrown by protesters, following an Orange parade through the nationalist area this afternoon.

This evening, loyalist protesters returned to Ardoyne, and began hurling stones and bricks at police.

A tense stand-off involving both nationalist and loyalist youths has developed.

Two people have been arrested, but police say this number is expected to rise in the coming days.

Earlier today, around 15 Orange Order members paraded through the area without major incident.

Representatives of three lodges and a band walked silently through the Ardoyne interface, flanked by riot police.

Nationalist protesters held placards as they watched them go past, exchanging insults with loyalist supporters in the urban area of terraced houses.

This morning's Orange Order parade through the Ardoyne interface also passed off without major incident.

The Parades Commission had ruled that the return leg of the parade must pass back through Ardoyne by 4pm.

The decision angered loyalists, but the Orange Order last night announced that they had reached a "peaceful resolution".

The marchers were transferred to Ardoyne by bus to meet the deadline.

Up to 200 residents lined the streets outside the Ardoyne shops this morning, in protest against the parade through the nationalist area. 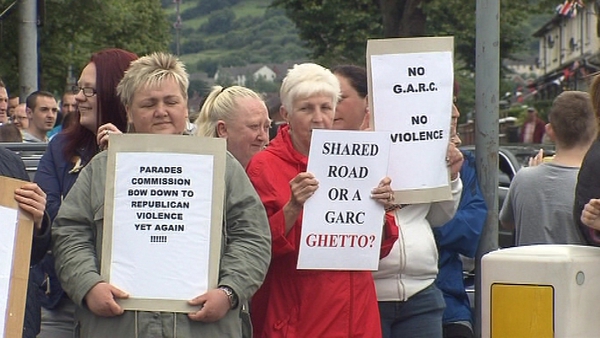 Police appeal for calm ahead of Orange Order parade