The Oscars are the biggest award show of the year and, as usual, all eyes are on the star-studded red carpet. Click through our gallery to see what the celebs wore to the 92nd Academy Awards.

The presenters
Last year,  the Oscars made headlines long before the prestigious ceremony began as producers struggled to find a host after Kevin Hart stepped down from the role amid controversy over old tweets.

In the end, their solution was to appoint a number of high-profile celebrities to fill various roles throughout the event and, by the looks of things, that trend will continue in 2020.

Fortunately, these appointed stars took their roles seriously. Not only did they deliver their lines on cue but they looked fabulous while doing it. The show's hosts were some of the best dressed on the night.

Read more: Here's what's in the goodie bags for Oscars nominees this year

The Nominees
This year's nominees are truly an outstanding bunch of actors. From Adam Driver's role in Marriage Story to Cynthia Erivo's part in Harriet - these performances had 'Oscar nomination' written all over them from the moment they hit the screen.

Heavy hitters including The Irishman, 1917 and Once Upon a Time... In Hollywood have ten nominations each while Jojo Rabbit, Little Women, Marriage Story, and Parasite have six each.

Truly though, the person we are most excited to see walk the red carpet is 'Best performance by an actress in a leading role' nominee, Saoirse Ronan. At just 25 years of age, the Carlow woman has been nominated for a fourth Oscars thanks to her incredible performance as Jo March in Greta Gerwig's Little Women.

Of course, Saoirse Ronan isn't the only Irish lady walking the red carpet tonight. Outlander star Caitriona Balfe looks absolutely incredible in Maison Valentino while Irish composer Eimear Noone - the first woman to take charge of the orchestra at the Academy Awards - wore a fantastic gold creation from Claire Garvey.

Read more: Here's what the Irish wore at the Oscars 2020

Red Carpet Trends
The Oscars are the perfect way to wave off awards season and the red carpet is always a feast for the eyes as celebrities dare to be different.

The designs are haute couture, the stylists are the best in the business, the stars have some of the most beautiful faces in the world and so, of course, competition is at an all-time high to be noteworthy in a sea of extraordinary.

Despite this, certain trends will inevitably emerge; the SAGs favoured Old Hollywood glamour, the Golden Globes presented big bows, the BAFTAs delivered a splash of pink, and the Grammy's highlighted the power of exceptional menswear. 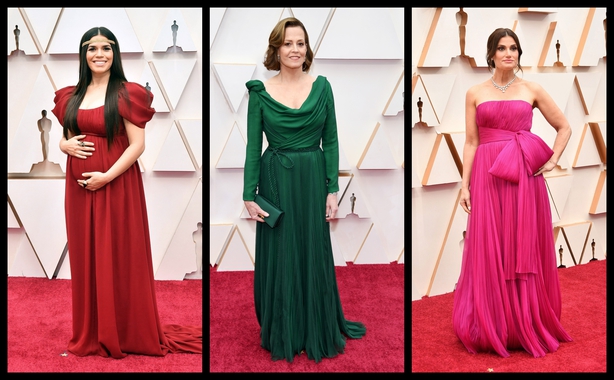 Click through our gallery above to see Hollywood's brightest stars arrive at the Dolby Theatre in Los Angeles for an unforgettable evening at the 92nd Academy Awards.