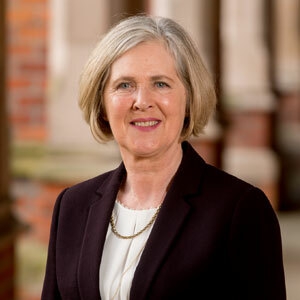 Opinion: Brexit marks a defining moment in the relationship between women and the state in Northern Ireland

Theresa May spent two days in Northern Ireland this month. She came to reassure a majority Remain population that there would be no visible border in Ireland. She promised that the backstop guaranteeing a soft border would remain in the Withdrawal Agreement.

Amid the controversy over the border and backstop, one issue has been conspicuous by its absence. It is the effect of Brexit on women in Northern Ireland. This is not a minor matter. Brexit marks a defining moment in the relationship between women and the state in Northern Ireland.

The referendum result in June 2016 showed a majority (56%) in Northern Ireland voting to remain in the European Union. There was no overall difference between women and men’s support for each question. Young women, though, were much more pro-Remain than any other age cohort. In the border region too, a gender gap was evident and only 28% of Leave voters were women. Since that result, support for the Remain position has grown to 58%. An overall gender gap has opened up, with 61% of women supporting Remain compared to 55% of men.

From RTÉ Radio 1's News At One, a report on Theresa May's visit to Belfast

Women’s organisations see Brexit in a negative light. They fear that a Brexit-induced economic downturn would intensify poverty among women and families. They are also concerned that the community and voluntary sector, a vital support to the peace process, will lose out. These fears are well founded: current economic analysis by EY forecasts that Northern Ireland’s economy could contract by 2.7% with the loss of up to 12,000 jobs, and slip into recession.

Leaving the EU also brings to an end an important source of funding for women’s civil society groups. Since 2014, European Structural Fund support for women’s voluntary organisations came to €3.7 million. The funds supported local cross-community initiatives, peace projects and education activities. This is an important subvention in a region with the highest rate of women’s economic inactivity in 2018 at 33%.

Building peace, the work of many women’s groups, involves breaking the culture of tacit silence and learning to share space with "the other". Yet the role of women in rural peace-building is neither adequately recognised or properly resourced. In 2015, the Department for Employment and Learning routed European funds to further education colleges and away from women’s community-based programmes. As a result, back-to-work programmes for lone parents run by women’s centres were cancelled. The cycle of high female economic inactivity was perpetuated.

From RTÉ One's Nine News, a report in the immediate aftermath of the Brexit referendum result on the impact on communities along the border

One can see how a hard border is a problem. Cross-border living and working is a regular feature of life for over 800,000 people, 13% of the island’s total population. One woman imagined the loss of everyday easy cross-border movement: "say I want to walk the dog. I’m literally 10 minutes across the border. It would be a nightmare". Similarly, one man chafed at the idea of border travel restrictions: "the last thing that I bloody want is to go across the border with my passport to visit my granny".

This anxiety over the disruption caused by a hard border is shared by women and men from both communities. In 2017, 80% of Catholics and 60% of Protestants resisted the idea of having to carry documentation to travel across the border.  Yet, even as May’s visit to the island was in progress, car insurance companies on both sides of the border were preparing to issue green cards to their customers to enable them drive in the other jurisdiction.

For the people in Northern Ireland, the combined effects of Brexit politics and the absence of functioning political institutions have frozen public decision-making. The 1998 Good Friday Agreement guaranteed an equivalence of human rights between Northern Ireland and Ireland. In the absence of an Executive and Assembly at Stormont, women’s rights and protections suffer.

From RTÉ Radio 1's Today With Sean O'Rourke, the first in Brian O'Connell's Brexit And The Border reports

Legislation on domestic abuse to bring Northern Ireland into line with provisions in England and Wales has stalled. A modest bill to introduce abortion for unviable pregnancies fell in 2017 on the collapse of the political institutions.

Although continuation of the common travel area between the UK and Ireland may be available for British and Irish citizens post-Brexit, it may not apply to women with other citizenship identities. For these women, cross-border travel restrictions will limit their rights to access healthcare, including abortion services, in southern Irish hospitals.

Working women share the concerns of their sisters in Britain that Brexit will expand the gender pay gap, dismantle work-related protections and erode the principles of equality and non-discrimination built into law through four decades of EU membership. Brexit will return about 140 policy areas from the EU that intersect with the devolution settlement in Northern Ireland. They include policies with important equality implications such as cross-border pensions, reciprocal healthcare arrangements, and co-operation in family law cases.

Michel Barnier, the EU’s chief Brexit negotiator, shows more concern about Northern Ireland than Theresa May. As Commissioner for regional policy from 1999-2004, Barnier put in place the funding to secure the peace process. In May 2018, Barnier returned to Northern Ireland and met with the NI Rural Women’s Network to understand the impact of Brexit on women’s lives. The UK Prime Minister has not met women’s civil society groups. Yet, under the watch of this prime minister who self-identifies as a feminist, the framework for gender equality shaped by EU membership will disappear.  No wonder women in Northern Ireland are anxious for the future.

This article is based on Brexit, Gender and Northern Ireland in Gender and Queer Perspectives on Brexit edited by Moira Dustin, Nuna Ferreira and Sue Millns

Prof. Yvonne Galligan is Director of Equality, Diversity and Inclusion at TU Dublin