Theresa May has said she and her government are committed to avoiding a hard border in Ireland and protecting the Good Friday Agreement.

In a speech in Belfast, the British Prime Minister said the commitment to avoiding a hard border on the island of Ireland was made "in good faith" during the Brexit negotiations.

Mrs May said that she accepted that reopening the backstop negotiations was a real issue for the people of Northern Ireland. She said her commitment to avoiding a hard border was "unshakeable".

"I'm here today to affirm my commitment, and that of the UK government, to all of the people of Northern Ireland, of every background and tradition," she told the assembled audience of business leaders and reporters.

She said that she wanted to "affirm my commitment to delivering a Brexit that ensures no return to a hard border between Northern Ireland and Ireland, which is unshakeable".

"Northern Ireland does not have to rely on the Irish Government or the European Union to prevent a return to borders of the past.

She added: "I want to work closely with Taoiseach Leo Varadkar and the Irish Government to strengthen the bilateral relationship we have built."

This evening, a spokesperson for the Government welcomed the British Prime Minister's restatement of the commitment to having no hard border.

They said her statement about the need to recognise shared identities in Northern Ireland was especially welcome.

"However, we still have concerns about unrealistic expectations regarding what can be achieved regarding the backstop. The EU position is clear and not for changing. There is scope to adjust the political declaration but not the Withdrawal Agreement," the spokesperson said.

The backstop is effectively an insurance arrangement required by the EU to ensure the border between Northern Ireland and the Republic of Ireland remains open if no wider deal is agreed on future UK/EU trade.

It would see the UK enter into a temporary customs union with the EU if no trade deal is sealed by the end of a transition period after Brexit, which lasts until December 2020 and could be extended to the end of 2022.

Northern Ireland would also abide by EU single market rules on goods to avoid any need for regulatory checks of products crossing the border.

Backstop changes a key issue - May 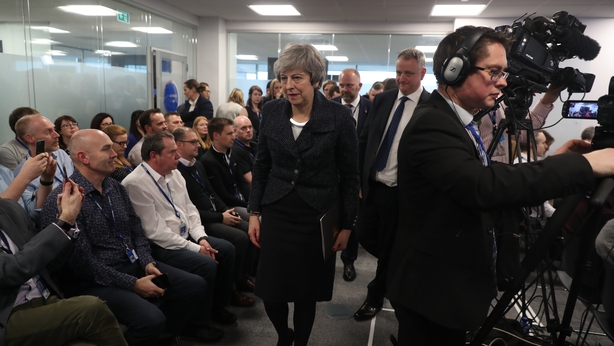 Mrs May said that while she had tried to make the case for the Withdrawal Agreement, she had had to accept it would not get through parliament in its current form.

"I fought hard to make the case for the deal as it stands," she said.

"I believed it could command a majority in the House of Commons, but I have had to face up to the fact that in its current form it cannot and the need for changes to the backstop is the key issue.

"While there were those in Northern Ireland who favoured it, it is also true that the backstop is not supported by the two main Unionist parties here and it also influenced MPs in England, Scotland and Wales in voting against the deal."

Asked how she could convince the people of Northern Ireland to accept a Brexit deal that was stripped of the backstop, Mrs May said: "I'm not proposing to persuade people to accept a deal that doesn't contain that insurance policy for the future.

"What parliament has said is that they believe there should changes made to the backstop."

Mrs May also called for the return of the power-sharing government in Northern Ireland.

She said: "I know this is a concerning time for many people here in Northern Ireland.

"As we do so, I hope we can also take steps to move towards the restoration of devolution, so that politicians in Northern Ireland can get back to work on the issues that matter to the people they represent."

May to meet Juncker in Brussels 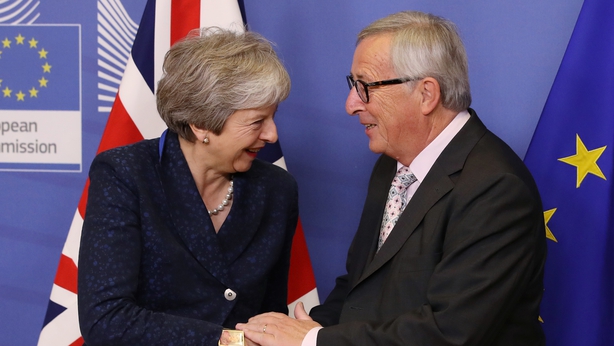 Mrs May is to meet European Commission President Jean-Claude Juncker in Brussels on Thursday, the commission's spokesman has announced.

The European Union wants to hear what Mrs May plans to do on Brexit, the spokesman said, before she holds the talks in Brussels.

"The European Union's position is clear," the spokesman for the EU's executive Commission, Margaritis Schinas, told a news conference.

"We are expecting, waiting once again to hear what the prime minister has to tell us."

Taoiseach Leo Varadkar is due to meet EU leaders tomorrow.

Taoiseach says he will travel to Belfast on Friday to speak with all the major political parties and businesses there about Brexit. @rtenews

MPs voted last week to say they would only back Mrs May's Withdrawal Agreement if the backstop was replaced by "alternative arrangements".

Critics fear the backstop arrangements could lead to the UK being trapped indefinitely in a customs union, scuppering future trade deals with markets around the world.

And the DUP, whose ten Westminster MPs keep the Conservative party in government, strongly rejects any measure that could lead to divergence between Northern Ireland and the rest of the UK, effectively creating a regulatory border in the Irish Sea.

The party’s leader Arlene Foster has said Europe knows that the backstop is the issue with the Withdrawal Agreement and is "turning their face against that".

Sinn Féin’s Michelle O’Neill has said that the issues of the border and the Good Friday Agreement have been secondary issues compared to infighting in the Conservative party for the last two-and-a-half years.

Speaking on RTÉ's News at One, she said the British government had completely disregarded Northern Ireland citizens.

Ms O'Neill also said that the DUP did not speak for the majority of people in Northern Ireland.