Frank Robbins recalls the events on Palm Sunday 1916 at Liberty Hall where a green flag with a gold harp was hoisted above the building.

We had a great field day on that occasion

On Palm Sunday 1916 the Irish Citizen Army paraded outside Liberty Hall. Lined up in formation they watched as fourteen year old Mollie O'Reilly proudly hoisted the green flag, emblazoned with a gold harp above the building.

They were then addressed by James Connolly who ordered all members to stay and defend Liberty Hall against attack from the authorities. Over the next week the Citizen Army were on guard day and night.

The symbolic events of that day were an indication that all their training was for something much more than manoeuvres.

Frank Robbins, a member of the Irish Citizen Army witnessed the ceremony. Here he recalls the events of that day.

Frank Robbins was interviewed for the RTÉ Television project 'Portraits 1916' on 27 November 1965. 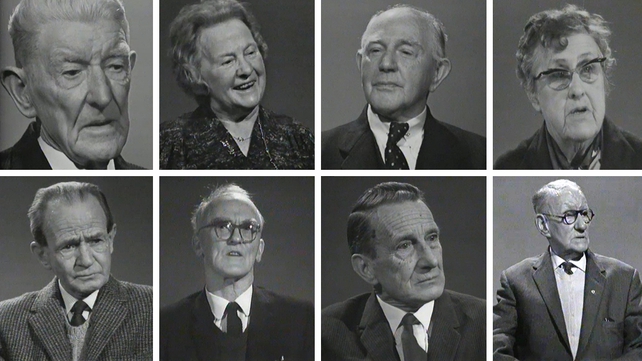 Individuals were interviewed under a working title of 'The Survivors'. The first of these interviews were organised by Jack White and recorded at the television studios in Donnybrook on 31 August 1964. Further recordings were organised by James Plunkett with the same working title of 'The Survivors' although none of these interviews were broadcast as full programmes.

In April 1965 producer Aindras O Gallchoir took over the project continuing to organise recordings with the initial intention of using the interviews to create one programme. By September Aindras O Gallchoir decided to produce seven thirty minute documentaries on the leaders of the Rising but many more people needed to be interviewed.