Jim Crawford will today attempt to go where no Irish manager has gone before.

The Republic of Ireland Under-21s have never qualified for a major tournament. Israel are the team which stand in their way of creating history.

Ireland have been decimated by injury problems in the build-up to this game. That is combined with a raft of players that have been called up to Stephen Kenny's senior side.

Evan Ferguson, Will Smallbone and skipper Coventry have impressed over the campaign, but Crawford believes it's only a matter of time before they make their impact on the senior squad.

"I think it is a matter of time," said Crawford.

"Now, I am not so sure, although Stephen [Kenny] has asked about certain players - he has asked to keep it private - but there are players who are definitely on his radar and that might be a case in November, where we've no games and it might be an opportunity to experiment with certain players with the friendlies [against Norway and Malta] that were just announced.

"But with the group that got us this far I was confident we would keep the names you said there, be it Will Smallbone, Conor Coventry, Evan Ferguson."

If Ireland are to get past Israel and qualify for next summer's tournament in Romania and Georgia, depending on how players play for their clubs, more players could find themselves at the helm of the Kenny revolution.

Ferguson has notched a couple of goals this season in the EFL Cup, whilst Coventry has made some fleeting appearances both domestically and in European football so far this season.

"Well, look, football development of players is such a hard thing to predict. That's why I am so careful talking about players.

"You say they are high potential, but are they the finished product? No. All players go through peaks and troughs during their career.

"For me, with international football, those players who are peaking closer to the window that you say ok they'll come in and play.

"I don't know how Stephen operates but if Evan Ferguson is playing first team football with Brighton and he is scoring goals I'd say there is every chance he will get a senior call-up.

"Same goes for Will Smallbone, who is doing very, very well at Stoke City at the minute so come the finals next June, who knows?

"Again, as everybody seen what is happening here, Stephen brought up ten players but that opened the door for other players to show their worth and they have done, we have got to the play-offs.

"So when June comes, if Stephen takes up certain players from this particular squad it is an opportunity for other players to shine."

Aaron Connolly will be hoping for a chance to shine as his recall to the under-21 side will reignite an international career that has stagnated since over the last eighteen months.

"It's about getting your best players in the building first and foremost," said Crawford.

The last time Connolly featured for under-21s was September 2019, a 1-0 win at home to Armenia in which he played 89 minutes before being replaced by Knight. That was then under the then under-21 manager and now senior boss, Stephen Kenny.

Connolly played out wide that day, but could be used through the middle today.

"I'd see him as a striker. What he offers with his pace, when he gets turned running at defenders from deeper areas he will cause problems but it's also safe in the knowledge that if you have to play him out wide then he can do a job out there.

"But certainly I see him as a nine and you have these conversations with players. That to me is the first indication as to where you will get the best out of that particular player."

Asked whether Israel's style of play was reason to call up the Galwegian, Crawford replied: "Israel didn't influence me at all with the decision.

"You’ve got to do the maths to see how you exploit Israel’s weaknesses, whether that is changing the system, putting players in different positions, that’s a discussion we have as a staff. It’s about who are the best players we have out there for this particular window."

There was no update to Crawford's contract situation, stating he has 'parked' it until after this current international window when he will be officially out of contract. 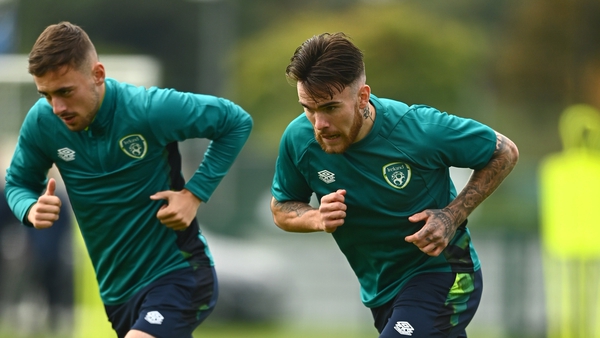 Aaron Connolly the only senior on U21s' radar, insists Crawford