Aaron Connolly says he is determined to help the Republic of Ireland Under-21s make history and prove he still has the hunger to produce the goods in a green jersey.

It has been a turbulent few years for the Galway man, who is currently on loan from Brighton and Hove Albion at Serie B outfit Venezia.

Connolly, 22, said it was "a fresh start" after making the switch in July - having burst on to the scene with a brilliant brace for Brighton against Tottenham in October 2019, his star has since fallen.

Injuries, a loss of form and a patchy loan spell at Middlesbrough have seen Connolly drop out of the last few Ireland senior squads, but a call-up for the huge UEFA Under-21 European Championship play-off first leg against Israel on Friday is a chance for Connolly to remind people what he is capable of.

"It's a big honour," the attacker told FAI TV.

"I actually spoke to John Morling first [the FAI's senior football consultant]. John was the one who brought me over to Brighton when he was the academy manager there.

"When he mentioned how big the game was I couldn't wait to get involved. It's just to show people I'm not taking playing for Ireland for granted.

"Maybe some people have had that perception over the last few years. It's a chance to help the Under-21s qualify for their first ever [major] tournament and to show people what I can do.

"Yeah I've made some mistakes, or so-called mistakes, over the last certain amount of years."

"I was a bit surprised I was still eligible to be honest with you. A lot of people have certain things to say about my career so far but I think they kind of forget I am still eligible to play Under-21 football.

"Yeah I've made some mistakes, or so-called mistakes, over the last certain amount of years. It's a chance to go and show people I'm ready to play, ready to focus on football, and like I said before, help the Under-21s."

Former Dundalk goalkeeper Gardy Rogers told the RTÉ Soccer Podcast that it was a risky move by Jim Crawford to bring a senior international back into a settled U21 squad.

It's three years since Connolly played for the U21s. Stephen Kenny was the manager then. He has since graduated to the senior job, but he will be paying very close attention to the Tallaght showdown and to Connolly's display in particular.

Kenny is an admirer of his talents but has spoken in the past about Connolly's need for regular game time.

"It's been a while now since I've played at any level for Ireland," Connolly added.

"I know most of the boys from growing up and stuff so I'm just looking forward to the game starting and hopefully we can make a bit of history for the U21s.

"Stephen was the manager the last time I played for the U-21s. I've played however may games for the first team and for now my main focus is the U21s, but obviously it would be nice to put myself back in the plans for Stephen and show him I'm ready to focus and play for Ireland again." 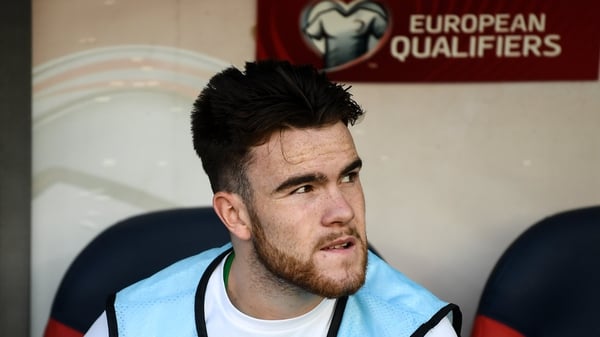 Jim Crawford: 'Aaron Connolly is in a happy place'