Live coverage on RTÉ2 and RTÉ Player from 4.30pm

Live tracker on RTÉ.ie and the News Now app from 4.30pm. Updates and match footage on RTÉ Soccer Twitter and RTÉ Sport Facebook

Party on hold as an opportunity arises

On Thursday evening, Vera Pauw warned her players off having a "party" and to instead partake in a mere "celebration" - she didn't elaborate on the distinction - on the basis that Ireland may have work to do against Slovakia, with the possibility of avoiding Round 1 of the play-offs still technically on the table, should results go their way over the weekend.

So, it turned out. Before Friday's fixtures, Ireland sat fourth in the table of best-performing second-placed teams, with the eventual top three set to skip Round 1 of the convoluted play-off format, jumping straight into the second round.

Belgium, Switzerland and Iceland sat in front of Ireland in the queue, while both Serbia and Austria - both with two games still to play - had the chance to leapfrog the Girls in Green with their games in hand.

The possibilities were touched upon by Karen Duggan on RTÉ's live match coverage on Thursday, who settled the Norway-Belgium game as the pivotal one.

The panel assess Ireland's playoff path after they guaranteed their place with a 1-0 win over Finland in Tallaght #rtesoccer pic.twitter.com/6sHEt274Z2

One by one, across Friday and Saturday, all the results fell Ireland's way. Tuva Hansen struck a second half winner for Norway as they won in Leuven.

Serbia lost 2-1 at home to Portugal, falling out of second place altogether. And then, perhaps not unsurprisingly, Austria were dispatched 2-0 by the new European champions, Alessio Russo and Nikita Parris scoring in either half.

Victory for Ireland on Tuesday will guarantee their place as one of the top three runners-up, meaning they will jump to 'Round 2', where they will await the winners of one of the three 'Round 1' games contested among the second-placed teams ranked from 4th to 9th at the end of the group phase.

The byzantine play-off process has already been explored in greater depth by RTÉ's Anthony Pyne, which you can read here.

Tying up loose ends against Slovakians

Ireland delivered by far their scratchiest performance of an otherwise excellent campaign in the home draw with Slovakia last November - perhaps only rivalled in those stakes by last Thursday's halting display against the Finns.

Entering on a high following their vital 2-1 away win in Helsinki - arguably the most significant result of them all - an off-colour Ireland got bogged down in a dogfight with the fourth-seeded Slovakians, Martina Šurnovská side-footing home the lead goal in the early moments of the second half.

There were heart-sinking echoes of past disappointments and it appeared Ireland were on the brink of effectively undoing all the good work of Helsinki, until Katie McCabe, scuttled onto a loose ball in the left corner of the penalty area, drilling a low shot across the keeper into the far corner.

The Slovakians aren't threatening qualification and there isn't a whole pile at stake for them this week but they have proven themselves awkward opponents throughout this process, losing by just a solitary goal at home to top seeds Sweden and taking a point off Finland.

Their players are scattered around various parts of Eastern Europe, with others located in Austria, Spain, Italy and Sweden. The 23-year-old Šurnovská, playing for Slavia Prague, is the top scorer in the current campaign with four goals.

Nonetheless, the trend in the current campaign is that Ireland have fared better away from home, notably against Sweden and Finland, than they have in Tallaght.

GET IN!
Katie McCabe equalises

Speaking to RTÉ Sport this week, Ireland striker Heather Payne - after admitting it took a little while to get her head around the play-off process - was quick to point to the Slovaks' good results earlier in the campaign.

"We need to get three points there so we can get a higher ranking and get a better play-off and be in a better position. It's great that we have a play-off spot secured no matter what.

"We know they're a good side," added Payne. "They drew with Finland and we drew with them here [at Tallaght Stadium].

"We know it's going to be another tough battle. They’ve got nothing to lose. I know they can’t qualify, but sure why can’t they just come out and give it their all as well?

"All our focus had been on Finland, but it’s definitely going to be a tough game and we will have to come out with our best."

Ireland are short four regular starters for Tuesday. Vera Pauw had suggested that Niamh Fahey - in the Stand on Thursday due to a groin injury - would recover in time for Slovakia but the Liverpool centre-half is out.

Ruesha Littlejohn was withdrawn just before half-time against Finland due to a foot injury, replaced by eventual goalscorer Lily Agg.

More surprising is the absence of Megan Connolly, who departed the camp on Friday with a rib injury. The Brighton midfielder had slotted in at centre-half to cover for the absent Fahey, proving integral to Ireland's defensive effort.

Jamie Finn, meanwhile, is also out after picking up a second yellow card in the campaign in the second half on Thursday, the French referee accusing her of dawdling too long over a throw-in - a call with which the Birmingham City player was deeply unimpressed.

In their absence, 17-year old Shelbourne defender Jessie Stapleton has been called up, alongside West Ham's Izzy Atkinson. 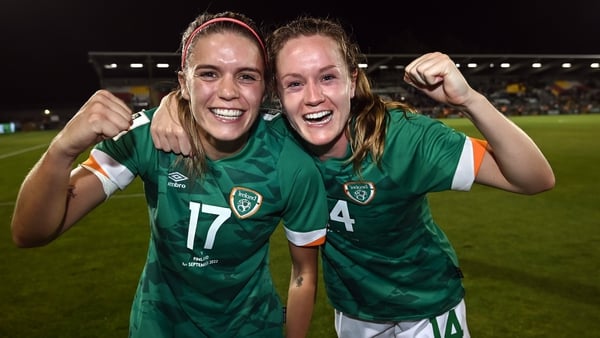