Republic of Ireland striker Heather Payne insists her college commitments will not be an issue when the World Cup play-offs roll around in October.

The US-based Payne missed last year's qualifier against Georgia due to college work.

The Florida State Seminoles player is in the fourth year of a dietetics degree and is working towards becoming a sports dietician.

She helped her team to a crucial 1-0 win against Finland last Thursday with a typically hard-working performance, and afterwards confirmed that there's no danger of her missing the play-off games next month.

"Oh yeah I have that sorted," the 22-year-old said. "I will definitely be back. You can't be missing a World Cup play-off.

"Our goal was always to take it step by step. After everything we were like 'okay, let's make the play-offs'. We’ve made it now but we want to get a higher ranked spot [in the play-offs]. The World Cup is our goal."

England gave Ireland a big boost on Saturday evening as their 2-0 win in Austria ensured the Girls in Green will progress to round 2 of the play-offs if they beat Slovakia in their final qualifier match on Tuesday evening.

The three best runners-up from the nine qualifying groups get byes to round 2, with the other six teams having to contest three round 1 matches on 6 October.

That means the clash in Bratislava holds real significance for Vera Pauw's charges.

"I've been looking at it for the last few months," Payne said of the complex play-off format.

"I think I kind of have it figured out, but the Slovakia game is crucial. We need to get three points there so we can get a higher ranking and get a better play-off and be in a better position.

"It’s great that we have a play-off spot secured no matter what. We’re still going to be looking forward to going to Slovakia to get the three points."

It won't be straightforward for Ireland on Tuesday. Slovakia took a deserved point from their meeting in Dublin last November and have been dogged throughout the whole campaign.

"We know they're a good side," added Payne. "They drew with Finland and we drew with them here [at Tallaght Stadium].

"We know it’s going to be another tough battle. They’ve got nothing to lose. I know they can’t qualify, but sure why can’t they just come out and give it their all as well?

"All our focus had been on Finland, but it’s definitely going to be a tough game and we will have to come out with our best." 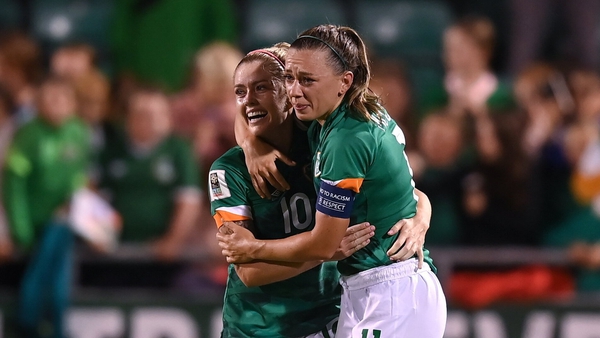