The Republic of Ireland are into the World Cup play-offs after a nervy, scrappy 1-0 win against Finland in front of a record crowd at Tallaght Stadium.

Substitute Lily Agg's well-taken header in the 54th minute settled a contest that Ireland had, largely, been second best in.

But who cares? Certainly none of the Irish supporters who made up the bulk of the attendance. And certainly not Vera Pauw and her players, who savoured an emotional lap of honour after the final whistle.

Ireland - third seeds when the draw was made in April 2021 - have secured second spot in Group A and can now look forward to October's complex play-off format with their dreams of making it to Australia and New Zealand next year intact.

In the build-up, Pauw had warned against looking too far ahead: "In Dutch we say, 'don't sell the skin of a bear before you shoot him'."

Her 'tigers' have played better than this over the course of the campaign, but the bear has been slain. Ireland have made it to a play-off for the first time since 2008, when they lost to Iceland in the European Championships.

Next up, a trip to Slovakia on Tuesday for their final group match.

And then, we really get down to business. 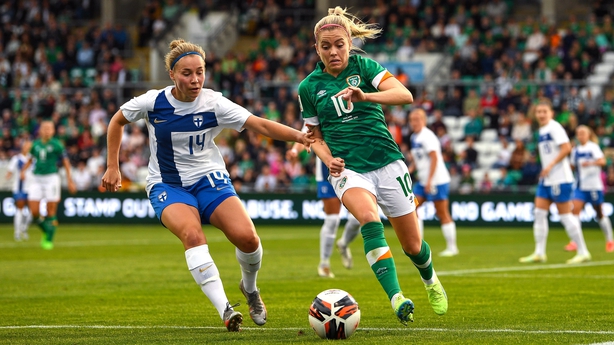 Niamh Fahey missed out with a groin injury so Pauw was forced into a defensive reshuffle.

Megan Campbell was handed her first Ireland start in three years on the left side of a five-player defence that was marshalled by the central trio of Diane Caldwell, Louise Quinn and Megan Connolly. Jamie Finn was stationed on the right.

That meant Ruesha Littlejohn and Denise O'Sullivan sat in the engine room, with Katie McCabe and Jess Ziu in the wider positions and Heather Payne up top.

Whatever the plan was though, it didn’t really work for Ireland in a disjointed first half.

They looked porous from the off, their shape exploited by the slick Finns.

Less than three minutes in, Heidi Kollanen’s disguised pass played in Lina Sallstrom, whose low cross was cleared by Connolly. Courtney Brosnan spilled the subsequent corner, Natalia Kuikka drilled it goalwards and only McCabe - positioned on the line - prevented a goal.

It was nervy stuff as Ireland struggled to retain possession while the visitors fizzed with intent.

Pauw’s charges looked affected by the occasion - and a little confused by their own tactical set-up. Littlejohn overhit a simple pass to Quinn; Campbell pirouetted into trouble on the left flank; and McCabe struggled to hide her frustration as Ireland regularly pumped hopeful balls towards the isolated Payne.

The first 20 minutes belonged to Finland. 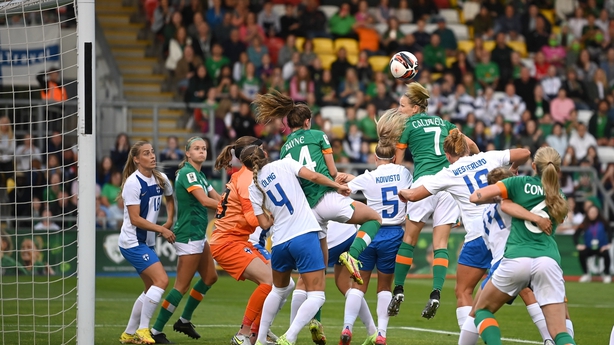 Tellingly Ireland’s first meaningful chance - 24 minutes in - came from a throw-in. Campbell flung a missile into the box for Quinn, who saw her header deflected over the bar.

That sparked a little flurry of Irish attacks with McCabe thumping a 30-yard effort over the bar, via a Finnish defender, and Caldwell hitting the bar with another header - although it wouldn’t have counted as the referee ruled the ball had gone out of play in the build-up.

Finland sprung into life again, coming mighty close to breaking the deadlock in the 28th minute when Ireland failed to deal with a cross from the left. It dropped for Linda Sallstrom eight yards out and her scuffed effort – which nicked two Irish defenders on its way - was clawed away by Brosnan.

Four minutes before half-time, Pauw was forced into a change when Littlejohn picked up a foot injury; Agg came into the middle of the park.

Ireland finally started to build momentum in the few minutes before the interval as Finn, Ziu and Campbell got further up the pitch to provide attacking width, with Payne’s low strike testing visiting keeper Tinja-Riikka Korpela, but overall it was an underwhelming first period.

There was no obvious change in tactical approach on the turnaround but Ireland were more aggressive and they almost plundered the lead in the 49th minute when another huge Campbell throw skimmed off the head of Finish defender Elli Pikkujamsa – Korpela did well to tip it around the post. Another scramble soon followed when Finland didn’t fully clear the corner, with Caldwell snatching at a shot inside the area and Korpela again getting down sharply to save.

Ireland 1-0 Finland - The breakthrough comes for Ireland as Finland fall asleep while defending a free-kick and Lily Agg has a free header to put her side in front.

With 54 minutes on the clock, Ireland grabbed the lead. McCabe - who set the tone in a much improved second half - won a free-kick inside the Finnish half after she thundered into a 50-50 with Emma Koivisto.

Connolly floated it in, and Agg - free as a bird in the box - guided a brave header beyond Korpela. Tallaght erupted and Ireland were liberated. They kicked on after that Agg opener but the Finnish threat was never fully extinguished.

In the 68th minute Payne had a rare opening when she galloped in behind the Finnish defence and cracked off a low left-footed strike that Korpela blocked with her legs. The corner, once again, caused panic and McCabe smashed a fine effort over the bar after Finland hadn’t cleared their lines.

Koivisto cut in from the left and lashed in an awkward attempt that Brosnan dealt with well. At the other end Ziu tested Korpela with a dangerous cross.

As the seconds ticked by, Finland desperately punted balls forward - but, just as they did in Helsinki, Ireland held firm, Sallstrom’s miscued injury-time header the final scare on a nerve-jangling night.