It's been just shy of 14 years since the Republic of Ireland last made the play-offs of a major international tournament.

Back then it was a meeting with Iceland, with a place at Euro 2009 up for grabs.

A 1-1 draw at Richmond Park meant the Girls in Green knew they had to score over there, but it wasn't to be as they shipped a 3-0 defeat in Reykjavik on a pitch that has been described as various versions of an ice rink over the years.

The starting team that day included Niamh Fahey and Áine O'Gorman, while defender Louise Quinn was also in the squad.

While there was disappointment at the time, there was a sense that the game was heading in the right direction. However, since that setback, hope has gradually been replaced by frustration as campaign after campaign has fallen by the wayside.

It makes the game on Thursday at Tallaght such a massive opportunity, and the three players that were involved at the Laugardalsvollur Stadium back in 2008 will be acutely aware of this.

Ten years ago qualification for Euro 2013 started so well, but five defeats on the spin - including losses to Wales and Scotland - put paid to Ireland's hopes. Four years later, the campaign never really got going as an early defeat to Thursday's opponents set things off on the wrong foot.

The most disappointing run was definitely the one for the last European Championships, where a freak own goal away to Ukraine cost the side a play-off place, when a draw would have been enough.

World Cup first on the line

The fact that it's a World Cup play-off opportunity up for grabs makes the prize even more enticing as the national team's record previously has been poor, having never finished in the two top in a qualifying group.

The attempt for the 2011 finals in Germany saw the Girls in Green take one point from their meetings with Russia and Switzerland, who had been third seeds but went on to top the group; it consigned Ireland to third place.

It was third again four years later after the side could similarly only manage a point from the games against the sides seeded above them, with group winners Germany eventually going all the way to the World Cup semi-finals.

Last time out, Ireland were drawn with Norway and the Netherlands, and once again it was third place for a Colin Bell-managed side. Crucially though, Ireland managed to gain a confidence boosting point away to the Dutch, who would make it all the way to the final.

While it was wasn't progress on paper, with the team once again finishing third, it was a result that had given the players the sense that they could mix it with the real elite in Europe.

Since then, the sting of missing out on a place at the Euros in England will surely have given the players based there even more desire to finally get over the line.

Louise Quinn, one of the 19 players in the 28-woman squad who ply their trade in England, told RTÉ Sport this week about how the hosting of the tournament there really brought women's soccer into the mainstream discourse, helped naturally by the victory of the host nation.

The big talking point for the national team since their last play-off appearance has arguably been off the pitch. Half a decade on since the players had threatened to strike over poor conditions, the squad have a major milestone within their grasp.

PFAI solicitor Stuart Gilhooly said at the time of the dispute in April 2017 that the players were "fifth-class citizens" and felt like, "the dirt off the FAI's shoe."

It's fair to say that it has moved on since then.

Before the start of this campaign Australia - then 11th in the FIFA rankings - were invited to Dublin and promptly beaten 3-2 at Tallaght Stadium.

This qualifying campaign has seen the team participate in the Pinatar Cup, which was followed by a highly credible draw with world number two side Sweden in Gothenburg. While the Girls in Green were never likely to lose to Georgia in June, manager Vera Pauw credited a training camp in Turkey for the emphatic nature of the victory.

It's clear that progress has been made with how the players are being treated. A victory on Thursday would be an ideal way for the players to reinforce their arguments of the time that fair treatment of the players could bear fruits.

The other massive improvement, in terms of issues outside of the white lines, is the attendances at games in Dublin.

The team has consistently been playing in front of record-breaking crowds at Tallaght, with 5,238 the current high water mark. Tickets for this week's game sold out in less than an hour when they went on sale back in July, so more history looks certain to be created in west Dublin.

It's been a long road, but there's the sense that it is finally heading in the right direction for this group of players. The momentum is there, the preparations have vastly improved since 2017, and the public are buying into it with over 7,000 due in Tallaght.

It's up to them to finally get the job done on Thursday night.

Listen to the RTÉ Soccer podcast on Apple Podcasts, Spotify or wherever you get your podcasts

Follow the Republic of Ireland versus Finland on Thursday (kick-off 7pm) via our live blog on RTÉ.ie/sport and the RTÉ News app, watch live coverage on RTÉ2 and the RTÉ Player, or listen to national radio commentary on RTÉ 2FM 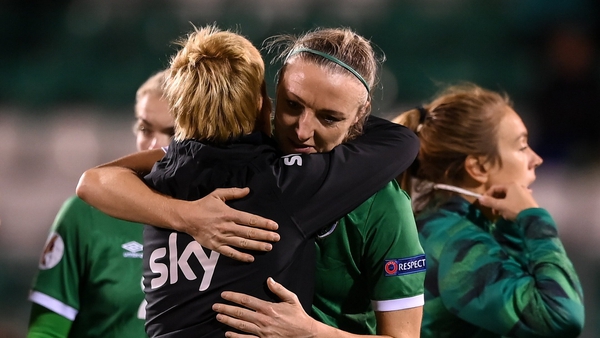 Vera is the bravest woman on our team - Louise Quinn