The Republic of Ireland survived an incessant Swedish onslaught to earn a hugely resilient draw in their World Cup qualifier at the Gamla Ullevi stadium on Tuesday evening.

Vera Pauw has often referred to her side as being "a bunch of tigers", and they needed to show remarkable steel to pull off one of their finest ever results.

The world No 2-ranked Swedes only needed a point to seal qualification for the World Cup, but they threw everything at the visitors to steal victory.

Katie McCabe put Ireland ahead with a deflected effort just before half-time after the Girls in Green came through a period of immense home pressure.

The inspired Courtney Brosnan kept the Swedes at bay with a string of good saves, but Real Madrid attacker Kosovare Aslanni eventually breached the Irish rearguard with a well-taken 79th-minute leveller.

It was always going to be an evening where the visitors needed courage, composure and, yes, a dollop of luck to get a result.

They had all of those things in Gothenburg and will take huge encouragement from what is a very significant point. 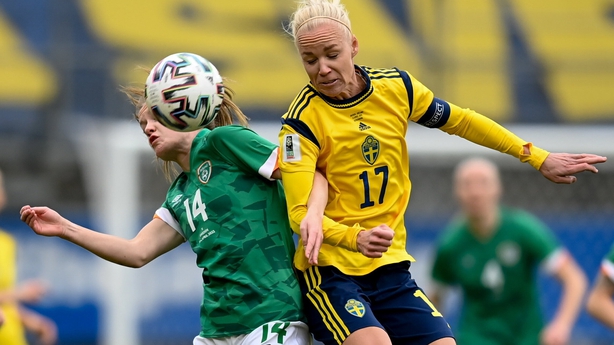 It was a big night for Shelbourne's Chloe Mustaki. The 26-year-old, who made her senior debut against Belgium in February’s Pinatar Cup, came in on the left side of defence.

Megan Connolly filled the void left by the injured Savannah McCarthy in the heart of the back line alongside Niamh Fahey and Louise Quinn.

That all meant that McCabe was nudged up to left wing, with Ruesha Littlejohn partnering Denise O’Sullivan in the middle of the park and Lucy Quinn on the right. Heather Payne led the line up top.

A small pocket of Irish fans made themselves heard, while a tricolour and 'Save Tolka Park’ flag cut through the sea of blue and yellow. But this was Sweden’s night – with a raucous and expectant home crowd turning up the volume ahead of kick-off.

Sweden hoarded the ball but it was Ireland who had the first meaningful attack six minutes in. Lucy Quinn pinched it inside the home half and fed McCabe on the left. Her pinged cross was poked goalwards by the stretching O’Sullivan, but the connection wasn’t quite clean enough to trouble keeper Hedvig Lindahl.

In the 12th minute O’Sullivan was brutally scythed down by a late, and high, Hanna Bennison lunge. Bennison was booked, but she was fortunate not to see red. It would not be the last time the Corkwoman came in for some special attention.

Sweden kept probing. Asllani dropped into the pocket and sought the runs of Blackstenius and Hurtig, while the imposing Caroline Seger drove her team forward from the middle.

Ireland were dogged – but they sporadically showed real composure too. O’Sullivan drew a gasp of admiration from the crowd when she casually nutmegged Hanna Glas. 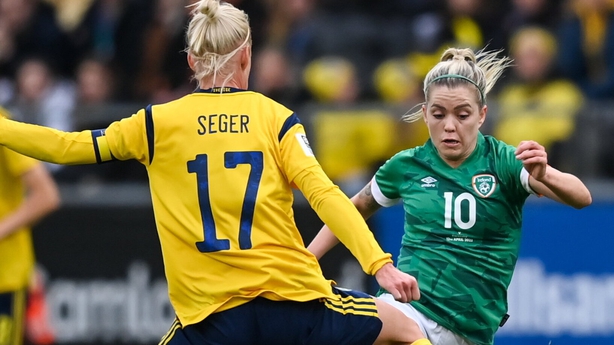 As the half progressed though, Sweden turned the screw.

Approaching the 30-minute mark, they pinned Ireland back in a period of unrelenting, suffocating pressure. First Jonna Anderson got in behind Jamie Finn down the left and stood up a fine cross that the incoming Hurtig powered over the bar.

Lucy Quinn picked Aslanni’s pocket with a crucial tackle as she surged towards the box; then Fahey nodded away a dangerous diagonal, before McCabe got her body in front of Blackstenius.

Finally, in the 32nd minute, it looked like Ireland had caved. Asllani was picked out by a terrific Bennison pass and looked certain to break the deadlock, but her effort crashed off the underside of the crossbar.

The pressure was unrelenting.

Sweden 0-1 Ireland - Katie McCabe gives the visitors a shock lead against the World No. 2 side. Vera Pauw's side hit the front just before the break #rtesoccer #SWEIRL
📺 https://t.co/GnumBfJKRv
📻 https://t.co/FDy5KofWIx
📱https://t.co/wH5tqlaBqQ pic.twitter.com/f0LRQqlb1L

And then, an incredible sucker punch. Having looked like they were ready to submit, Ireland stunned the natives by taking the lead. Megan Connolly’s brilliant right-wing cross wasn’t fully dealt with, O’Sullivan teed up McCabe and her well-struck effort ricocheted into the net via the boot of Magdalena Eriksson.

It was one-nil at half-time but on the turnaround Sweden picked up where they’d left off.

Brosnan – excellent all evening - showed good hands to gather Aslanni’s cross and she’d follow that up with some more solid keeping.

But in the 61st minute, Brosnan truly showed her value when she produced a moment of exceptional quality.

Substitute Filippa Angeldal – who had been a major doubt for this game due to illness – lashed in a shot that looked destined for the top corner until Brosnan somehow fingertipped it onto the bar.

As Ireland tired, Sweden pressed higher and higher. In the 72nd minute Blackstenius nodded over after yet another wicked cross deep into the Irish box. Moments later Angeldal threatened to punish a sloppy clearance but her effort fizzed well wide.

The fresh legs of Rolfo were causing problems too. She bent in a peach of a ball for Hurtig, who flashed a header inches past the post.

Ireland just couldn’t release the pressure valve with any period of sustained possession and, eventually, they cracked.

With 11 minutes to go McCabe’s loose pass on the halfway line was ruthlessly punished as the home team launched a devastatingly swift attack. Angeldal’s laser-like diagonal from deep found Aslanni – and she rifled it to the net.

But Ireland held. The final whistle sparked celebrations from both players - Sweden are off to the World Cup, while Ireland have strengthened their grip on second spot, which would earn a place in the play-offs.

For them, the dream of earning a breakthrough appearance at a major tournament is very much alive. 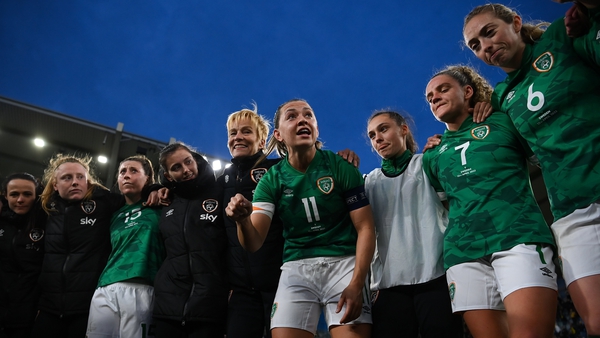 Pauw: These players give up everything for their country