Republic of Ireland manager Vera Pauw says the recent training camp in Turkey was crucial to laying the foundations for the 9-0 demolition of Georgia to maintain their push for a World Cup play-off spot.

There was little talk of a potential upset before the game – Ireland recorded a record 11-0 win over the same opposition last November and the Georgians have yet to score in qualifying after conceding 50 – as the visitors went about their business in a professional manner to equal their best away victory, against Malta in 2003.

The comprehensive win in Gori moves Ireland into second place in Group A, a point ahead of Finland.

It means three points against Finland in September, their penultimate game, would be enough to see them claim a play-off place for next year's finals as they look to become the first Irish team to ever qualify for a major championships.

Four goals to the good at the break, Ireland pushed home their advantage with Katie McCabe claiming a hat-trick, one of six goalscorers on the night. 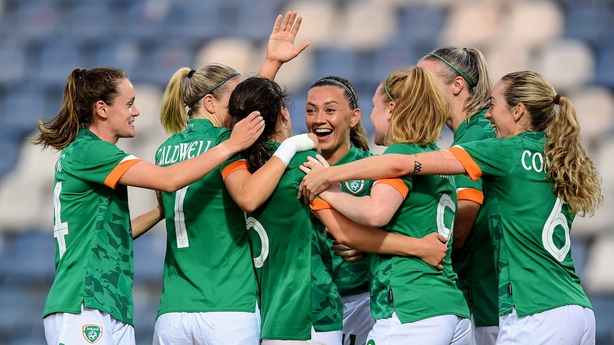 With set-piece delivery and accurate crossing central to so many of the goals at the Tengiz Burjanadze Stadium, Pauw says the 10-day camp was vital in nailing down their tactical approach given the early stage of the season.

"It was crucial," she told RTÉ Sport. "We worked a lot on set-pieces and keeping the pitch wide on both sides. We have done a lot on the crosses and winning the second balls.

"We can be even better, we can be sharper.

Vera Pauw pays tribute to her team after their 9-0 win over Georgia and calls on the fans to come out in force to Tallaght Stadium in September for crunch clash with Finland #rtesoccer
Report: https://t.co/bnEg0VLnXV pic.twitter.com/cz1YwRcfwe

"We are in pre-season...it’s amazing that you can still score nine goals. Nine-nil, a record away win, what else can you want?"

Katie McCabe will steal the headlines in claiming the match ball, as well as her assists, but Megan Connolly was the player of the match for her pinpoints deliveries throughout the game.

"You have those days some days where everything goes right. I was lucky today that people got on the end of it. I’m glad I could help the team."

Megan Connolly was named player of the match after a superb performance, featuring a goal and a shedload of assists #rtesoccer pic.twitter.com/Z8Gr6lVgiJ

After racing into an early 3-0 lead, Ireland took the foot off the pedal a little, McCabe claiming the fourth in stoppage time and Connolly says it is a mark of the team that they expect more from themselves.

"We could have got more. We would have been disappointed with the first half." 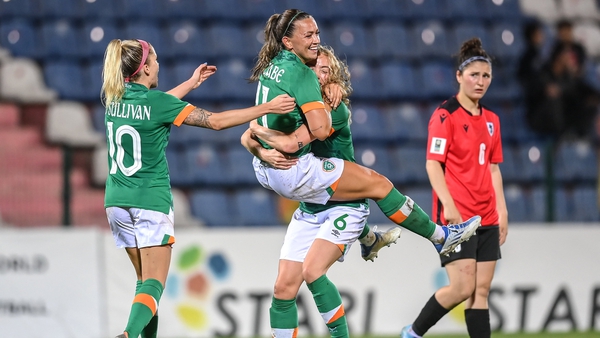