While now is a time for rest and recuperation for much of Shamrock Rovers' squad, there hasn't been an off-season as such for centre-back Roperto Lopes.

It's been a hectic time for the Crumlin native who will make his international tournament debut at the Africa Cup of Nations on Sunday when Cape Verde kick-off the the competition's second fixture against Ethiopia.

The 29-year-old last played a League of Ireland match on 19 November when he was rested for the first hour before coming on after 58 minutes as Rovers rounded off their title-winning campaign with a 2-1 win over Drogheda United on the final night of the season.

But in the knowledge that a possible Cup of Nations call-up was on the cards, 'Pico' has made a point of trying to sustain the fitness levels from the domestic campaign.

"I just tried to maintain mostly what I'd built up with towards the end of the season," he told the RTÉ Soccer Podcast from the team hotel in Cape Verde prior to their journey to Cameroon.

"In my head I had to maintain 75-80% of the fitness I finished the season with and I'd be ready to come over and train with the rest of my team-mates in Cape Verde and catch up and hopefully peak in time for the tournament.

"So I took a little rest two weeks after our season finished and then I went back to training."

Just like at all levels of the game, the Covid pandemic has also hit Cape Verde's build-up with a mooted friendly game against Morocco on New Year's Eve called off.

"So we were looking at the possibility of travelling straight to Cameroon and I'm not too sure whether we'll have a warm-up game beforehand but hopefully we get to squeeze one in," Lopes added.

The Cape Verdeans will face AFCON hosts Cameroon in Group A as well as Burkina Faso after their opener against Ethiopia. While Cameroon is the only one of the three that Lopes has faced in his two-year international career thus far, he is optimistic about his own side's chances of holding their own.

"We have a bit of a quiet confidence about us. We had a really good World Cup qualifying campaign and were devastated to lose out to Nigeria in the end but if you look back at the trip it was a real sort of confidence booster for us and it's given us the belief that we can go and compete with the bigger nations across Africa.

"And we've played Cameroon before and were in the same Africa Cup of Nations qualification group as them so we have the confidence that we know we're more than capable of getting a result against them."

Lopes will be buoyed by the fact he is coming into the tournament off the back of a strong campaign at the heart of Shamrock Rovers' defence, earning a PFAI Players' Player of the Year nomination for 2021.

He helped the Hoops retain the league trophy and credited the stability at the club led by manager Stephen Bradley and sporting director Stephen McPhail as a key ingredient. 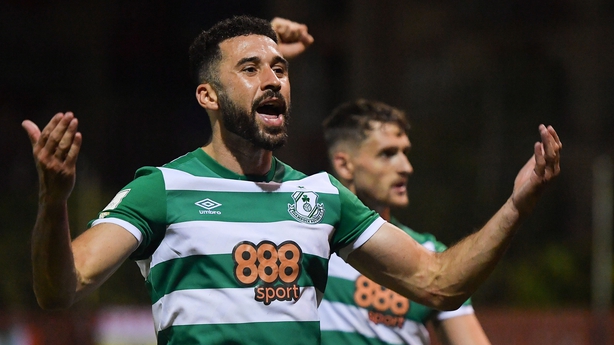 "It gives us a base to kick on each year and we're not trying to rebuild, keeping the core group and staff together. Everyone knows how things should be done and it's easier for new signings to come in and read what's going on in the group and we can help them get up to speed," said Lopes.

Europe though is one target Lopes and co hope to make a better fist of this coming season after missing out on the UEFA Europa Conference League group stages at the hands of Flora Tallinn.

"When you come that close, it hurts more but over the two games we let ourselves down which is the frustrating part," he admitted.

"We didn't really give a good account of ourselves, particularly in the first leg away to Tallinn so that was a tough one to take but we set our goals after that and reset and make sure we put ourselves in that position next year to have a good crack at it."

Republic of Ireland midfielder Jack Byrne, who recently spoke to RTÉ Soccer Podcast about his return to the club for 2022, will be a boost to those ambitions on and off the field according to Lopes.

"I've been chatting to Jack since he announced he's signing back because I was really good friends with Jack when he was here the last time, so I was delighted to see him come back," he said.

"He's a fantastic player but he's a great person as well. He really does brighten up the dressing room and I've met him a few times for lunch before I went away (with Cape Verde) and we played a five-a-side or two together. It's just great to have his presence back again."

But one figure whose presence will be missing for Rovers is Lopes' long time defensive colleague Joey O'Brien who has moved to Shelbourne to join Damien Duff's coaching staff.

"Joey was fantastic for me from the moment he arrived. Being a defender as well, you could bounce any question off him and he always had an answer for it because of the level he's played at, he's come up against nearly everything," he said.

"But the big thing that stood out for me with Joey was his quality. Everyone talks about the experience and his knowledge of the game. But I've just seen him in matches do things that really impressed me that I didn't expect from him myself and he's just such a good footballer and he really was a leader for us."

That capacity to do the unexpected is often referenced in regard to Zlatan Ibrahimovic.

The experience of facing the Swedish legend when Rovers took on AC Milan last year is one that should stand Lopes in good stead for the upcoming Cup of Nations where the likes of Sadio Mane, Mohamed Salah and other leading forwards will feature. And it's as much for the verbals as anything else.

"The nicest thing (Ibrahimovic) said to me was after they scored the goal and I was still getting tight to him was 'come on, hold my hand and let's go for a walk home'," Lopes recalls of the most broadcastable comment from the striker.

But between the valuable experience of big games, trophy hauls and an upcoming major tournament, Lopes still feels there is more to come from him.

"It has been a good year or two but I don't like to sort of put labels on it or say I'm peaking because I always feel that there is more to come or I can improve on something next year and that's the mentality to take definitely into next season."