In spite of a much improved all-round display, mistakes, as in the first leg in Tallinn, cost Shamrock Rovers dearly in every sense as their tenuous Europa Conference League group stage ambitions were clinically killed off at Tallaght Stadium, as Flora won 1-0 in the second leg and 5-2 on aggregate.

Trailing 4-2 following a defensive nightmare in the Estonian capital last week, Rovers dominated in Dublin 24 but couldn't find a breakthrough.

Flora bided their time, waiting for one decisive opportunity, which came shortly before the hour mark when Rauno Sappinen scored courtesy of a rare error from Alan Mannus in goal after Danny Mandroiu’s loose pass had given away possession on halfway.

The Estonian champions thus become the first club from their country to make the group stages of a UEFA competition and with it a guaranteed prize of €2.9million.

The consolation for Rovers is their run to this play-off round has brought them approximately €1.5 million.

There is now little time to mull over what might have been as head coach Stephen Bradley must regroup his side promptly. The League of Ireland champions' next game is on Sunday with a visit to arch-rivals Bohemians in the second round of the FAI Cup.

Despite their first leg horror show at the back, Bradley left his defence intact as he made two changes from Tallinn; Mandroiu and Aaron Greene starting instead of Richie Towell and Rory Gaffney.

With ten full internationals in their line-up, Flora made one switch with Marten Kuusk coming into their defence following suspension in place of Henrik Purg.

Raucously roared on from the off by the 3,500 Hoops faithful in the stands, Rovers signalled their intent inside the opening minute with skipper Ronan Finn flashing a half-volley off target. 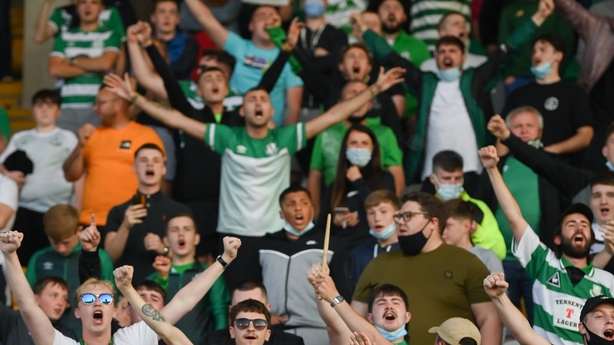 Flora keeper Matvei Igonen was soon in action as Rovers laid siege to the visitors' goal in a frantic purple patch just past 12 minutes.

First Greene blasted wide across goal after Dylan Watts picked him out over the top with a perfectly weighted 60-yard pass.

Graham Burke and Greene then set up Finn to work Igonen for the first time in parrying away a well-struck drive.

Igonen did likewise scarcely seconds later as the danger remained from Burke’s shot, the loose ball cleared for Hoops’ first corner of the night.

Rovers had Flora flustered at the back again on 21 minutes, the lively Watts sliding Burke to the end-line with Greene just unable to apply the finish to the low cross.

Linking up and passing the ball crisply, Rovers worked another opening as the half hour approached; Mandroiu nutmegging Martin Miller before rifling over the top from distance.

What looked like a groin injury forced Sean Hoare off on 33 minutes with Sean Gannon coming in a reshuffle of the Hoops back three.

Surviving the first half onslaught, Flora troubled the home defence as the interval approached, their skipper Konstantin Vassiljev’s powerful goalbound strike cannoning off Roberto Lopes for a corner.

Remaining on the front foot into the second half, Rovers worked tirelessly to quarry chances through the packed Flora defence.

Celtic-bound Liam Scales forced a corner with a low shot; Lopes and Joey O’Brien in turn then just failed to get enough purchase on headers from Watts' delivery as Flora cleared.

Despite their best efforts, however, errors came back to haunt Rovers, as Flora clinically punished them on 57 minutes. 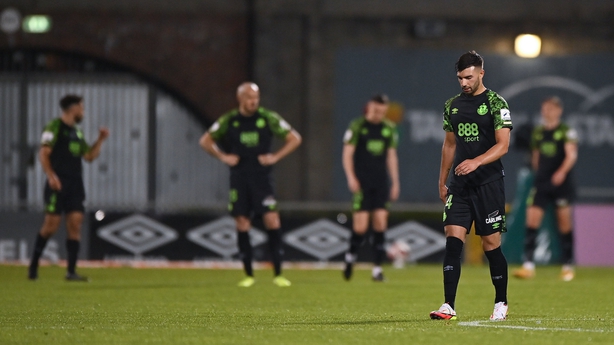 Mandroiu’s wayward pass was intercepted in midfield. Vassiljev skipped clear on the right to thread a ball through for the run of Rauno Sappinen.

Compounding the cheap loss of possession, Alan Mannus was slow getting down to the shot as the ball squirmed under his body to enter the net for a dreadfully soft goal.

Needing to score three times to stay in the tie now, Rovers nonetheless continued to play and press.

Lopes headed off target before Towell brought a fine save at his left-hand post from Igonen after fellow substitute Gaffney had played him in down the inside right channel.

Igonen saved once again in the 86th minute, diving to his left to push out Scales’ fine header from Burke’s pinpoint cross.