The legendary Republic of Ireland manager Jack Charlton has died at the age of 85.

The former Leeds and England defender who won a World Cup winner's medal in 1966 had been diagnosed with lymphoma in the last year and was also battling dementia.

Affectionately known as Big Jack, the Northumberland native took over the reins as Ireland manager in 1986 and brought unprecedented success to the national side as he guided the Republic to their first major finals at Euro 88 and two more in the space of 10 years, qualifying for the World Cup in Italy in 1990 and four years later in 1994.

Ireland reached the knock-out stages of both World Cups and reached the quarter-finals in 1990, only to lose out by the narrowest of margins, as the hosts denied them a place in the semi-finals with a 1-0 victory in Rome.

Charlton's last game in charge of the Irish team was the Euro 96 play-off defeat to the Netherlands, where the Dutch claimed the final spot at the tournament thanks to a 2-0 victory at Anfield in December 1995.

He spent his entire 21-year playing career at Leeds, making a joint club record 773 appearances, before retiring as a player in 1973 and going on to enjoy a successful and colourful career as a manager.

One of English football's most popular and larger-than-life characters, he had spells in charge of Sheffield Wednesday, Middlesbrough and his hometown club Newcastle.

A family statement read: "Jack died peacefully on Friday, July 10 at the age of 85. He was at home in Northumberland, with his family by his side.

"As well as a friend to many, he was a much-adored husband, father, grandfather and great-grandfather.

"We cannot express how proud we are of the extraordinary life he led and the pleasure he brought to so many people in different countries and from all walks of life.

"He was a thoroughly honest, kind, funny and genuine man who always had time for people.

"His loss will leave a huge hole in all our lives but we are thankful for a lifetime of happy memories."

The Premier League said players would wear black armbands and hold a minute's silence before kick-off during this weekend's games in tribute to Charlton.

It added: "The Premier League offers sincere condolences to Jack's family, friends and all those who worked with him at this sad time."

"As President of Ireland, may I express my sympathies at the passing of Jack Charlton," he said.

"The news of the death of Jack Charlton will have been received with great sadness by those of us who took him to their hearts as he brought Ireland to some of our most celebrated moments in Irish sporting history.

"He leaves a legacy of outstanding leadership of a group of players of many diverse talents, which he moulded into the successful team that captured the imagination of the nation. It was not just the success on the field of play, Jack's endearing popularity also had much to do with the warmth and personality of the person who quickly became such a legendary sporting icon.

"From a family that loved soccer, he had many connections with Ireland, which he chose for one of his quietest recreations -fishing.

"Sabina and I send our deepest sympathies to his family, friends and his legions of Irish fans."

Taoiseach Micheal Martin was among the first to tweet his reaction.

"So saddened to hear of the passing of Jack Charlton who brought such honesty and joy to the football world. He personified a golden era in Irish football - the Italia 90 campaign being one of pure joy for the nation. He gave us magical memories. Thank you Jack," he said.

A host of Charlton's former players and colleagues also paid tribute to the 85-year-old.

Paul McGrath said: "The Irish people warmed to him because of his big character and he gave us the belief in ourselves to compete in the big tournaments. I am very honoured to have been a part of Jack's journey.

"Today is a sad day for the Irish football community and we all owe him a huge grititude for the joy and memories he has given us. He is a man I genuinely loved." 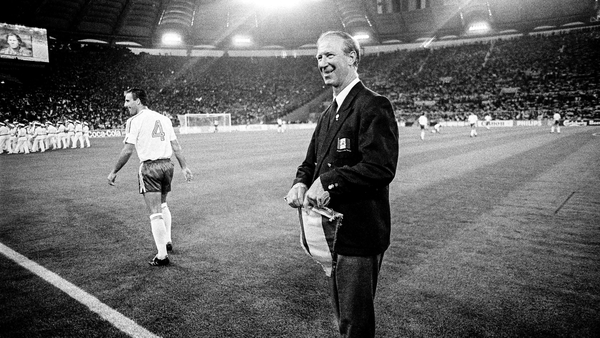