One of the sticks used to beat Martin O'Neill towards the end of his Republic of Ireland tenure centred on the way he named his starting team.

Despite tactical strategies discussed and played out on the training pitches midweek, O’Neill would only inform his players of the team around an hour before kick-off.

It was a topic that generated much debate – Matt Doherty offered his concerns after the manager's departure – but in Windsor Park last night Dundalk head coach Vinny Perth adopted a similar approach and felt it reaped rewards.

With last weekend's FAI Cup final defeat fresh in the mind, the Lilywhites made the trip north to take on Linfield in the first leg of the new Unite the Union Champions Cup.

On a bitterly cold night in Belfast, a crowd of 2,819 saw Dundalk secure a 1-1 draw ahead of the second leg at Oriel Park in three days' time, Daniel Kelly's goal cancelling out Shayne Lavery's effort.

With morale low during the week after the penalty shootout defeat to Shamrock Rovers, Perth explained why he tried a fresh approach for the game against the northern outfit.

Sean got to the ground and he wanted to play, and the players were inspired by that

"For the first time since I have been at the club, we didn’t pick the team until we got here," he told the club website. "We tried something different. Not to keep the players guessing, but motivated last night.

"The only player I told, Sean Gannon, had a hamstring injury over the past number of weeks, he was the only one that knew.

"We got to the ground and he wanted to play, and the players were inspired by that. The only mistake I made was there was huge disappointment that they weren’t in the team." 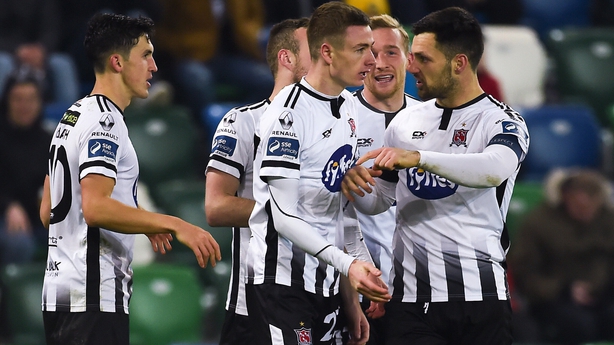 Perth says he enjoyed what was a lively encounter and felt his side were full value for at least a share of the spoils.

"That was one of the most enjoyable games I have been involved with all season. Not in the sense of being relaxed, but I felt there was an edge in it.

"I was really impressed by the venue, for me the best venue on this island, albeit the Aviva from a football point of view is bigger.

"The players got a huge lift when they turned up and it has been a difficult week. Bar the first 10 minutes I thought we dominated the ball and were unlucky not to win the game."