The first instalment of the new Unite the Union Champions Cup proved to be an enjoyable affair at Windsor Park on Friday night, with Daniel Kelly's goal securing Dundalk a 1-1 draw ahead of the second leg at Oriel Park in three days' time.

On a bitterly cold night in Belfast, a crowd of 2,819 watched a lively encounter between the SSE Airtricity League champions and their Danske Bank Premiership counterparts which was a good advertisement for any potential all-island league.

Man of the match Shayne Lavery's crisp strike gave the hosts an early lead but Dundalk, who took a bit of time to shake away the cobwebs of Sunday's FAI Cup final defeat to Shamrock Rovers, improved as the game wore on and they will be confident of finishing the job off in the return leg thanks to Kelly's equaliser.

Speaking in the build-up to the game, Linfield manager David Healy said that the tie wasn't a priority for his side, but the Blues made just two changes to the side that beat Carrick Rovers on Saturday, with Lavery - the star of their European run in the summer - restored to the starting line-up.

In contrast, Dundalk, who announced the signing of Derry City midfielder Greg Sloggett before the game, made seven changes to the side which started at the Aviva Stadium, with Chris Shields available again after suspension.

It took just nine minutes for the opening goal to arrive. Jamie Mulgrew's pass with the outside of his left foot found Lavery and he was given too much time by Andy Boyle to set himself and arrow a fine effort across Gary Rogers and into the bottom corner. 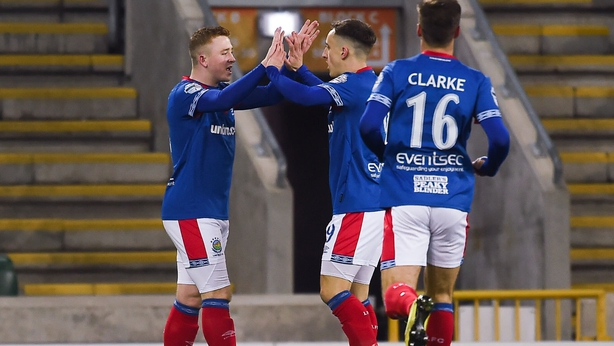 Dundalk grew into it after that and eventually took control of things, with Patrick Hoban firing over after picking the pocket of former Waterford midfielder Bastien Hery, before Jordan Flores curled one just wide with his left boot.

The closest that Vinny Perth's side came to equalising came on the half-hour mark when Boyle stormed in to meet a John Mountney corner, but Gareth Deane made a brilliant save, touching the ball onto his crossbar.

Linfield carried a threat going forward and their supporters were celebrating again two minutes before the interval when Joel Cooper's effort hit the net, but unfortunately for the natives, it proved to be the side-netting.

Dundalk came out for the second half looking much livelier and Flores was unlucky to see another curler whizz past Deane's post before they restored parity in the 51st minute.

Hoban's pass invited Kelly to run in behind the Linfield back four and the winger showed great composure to slot home his 15th goal in all competitions - Dundalk's 100th of the season - and level things up.

Perth introduced Michael Duffy and Sean Gannon before the hour to give Dundalk a more familiar look and Hoban almost put them in front in the 65th minute, but he just couldn't get his head to Kelly's right-wing cross.

Things slightly petered out after that, with Linfield substitute Andrew Waterworth seeing a drive deflected wide for a corner before Shields drove a half-volley into the turf after the ball sat up nicely for him 20 yards out.

Dundalk pushed for a second goal in the final few minutes, with Duffy cynically hacked down by Mark Stafford just as he was approaching the penalty area.

Georgie Kelly - another substitute - almost won it in the dying seconds,  but he just couldn't get his shot off.

Watch the second leg of Dundalk v Linfield live on RTÉ2 and the RTÉ Player from 7pm on Monday.