Gary O'Neill hit the winning spot-kick as Shamrock Rovers were crowned FAI Cup champions for the first time in 32 years, beating Dundalk 4-2 on penalties at the Aviva Stadium.

Two goals inside the final five minutes took this game to extra-time as Aaron McEneff’s penalty handed the Hoops an 89th-minute lead, before Michael Duffy rifled home an injury-time equaliser.

Nothing could separate the teams in extra-time as the match finished 1-1, with O’Neill’s spot-kick proving crucial.

The two best sides in the country came head-to-head for the FAI's blue riband event and the early atmosphere did the occasion justice as a huge crowd of 33,111 filled the Lansdowne Road arena.

Green and white smoke billowed out onto the pitch from the Rovers end of the pitch as the game got underway, and both sides looked lively early on with some strong tackles aplenty, while the two teams looked to get their passing games going. 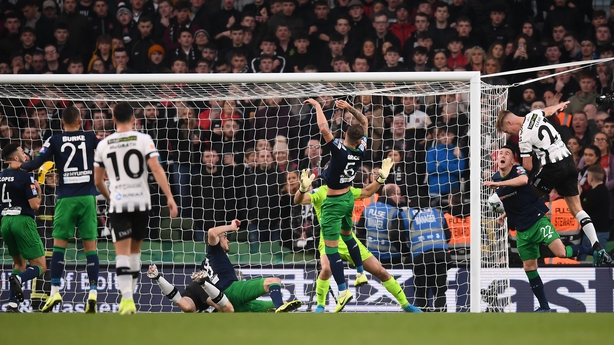 Sean Murray had the first shot of note in the sixth minute but the former Watford midfielder dragged his effort wide of the near post having cut in from the right.

Rovers followed up with a long-range effort from O’Neill but while well hit, it was blocked en route and duly cleared.

In the 12th minute, Greene, leading the line on his own, burst into the Dundalk half and opted to go it alone despite Graham Burke up in support.

The end product failed to match the endeavour, however, and Gary Rogers was not tested by the long-range effort.

But Rovers began to dominate and a minute later Greene was played over the top by a delightful Jack Byrne ball, and while his first touch and left-footed shot were well executed, the ball just flew wide of Rogers’ left post

Rovers kept up the pressure and were nearly rewarded as the relentless Greene dispossessed Daniel Cleary who was playing with fire trying to carry the ball out of defence.

The striker worked the ball to the touchline and spotted Ronan Finn arriving into the six-yard box. The cross found the Rovers skipper but Finn’s flicked effort needed more purchase to guide the ball on target.

Dundalk’s best chance thus far came in the 19th minute as Murray was adjudged to have been taken down on the edge of the box.

Dane Massey took the resulting set-piece and while the angle suited a left-footer, the defender could not keep the ball down and lifted it harmlessly over the bar.

Eventually the game calmed down as both sides took a well-earned breather midway through the half, but it burst back into life as Cleary went through the back of Greene to hand Rovers a free-kick in a dangerous position. 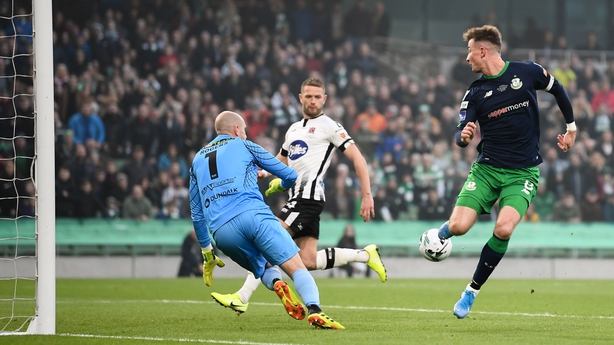 Burke opted for accuracy over power and while the strike was on target, it proved straightforward for Rogers who was behind it all the way.

While Rovers looked the most dangerous going forward as a unit, it was the league champions who began to create the more telling chances with two set-pieces causing real problems for the Rovers rearguard.

And then, just a minute before the break, again it was Murray’s delivery to the back post that caused the problems.

This time it was Cleary who rose highest to guide his header downwards but the angle was tight and the defender could only direct the ball into the side-netting.

Scoreless at the break, but the tone had been set for a scintillating second half.

Dundalk came out with real intent after the break and it was noticeable to see the bodies up in support of Pat Hoban with Murray, Jamie McGrath and Massey all up with the play early on.

And it nearly paid immediate dividends as Massey eventually worked the ball in from the left, and only for the most vital of interceptions by Joey O’Brien, Dundalk would have had a clear look at goal.

This time Burke got in sight of goal and put his foot through the ball, forcing a decent stop from Rogers who gathered at the second attempt.

Then in the 51st minute, Burke was again released into space up the right flank, and this time he had support with Greene and Aaron McEneff bursting forward to offer options.

But again the former Preston man decided to shoot, but it was the wrong call as his wild left-footed effort flew over. 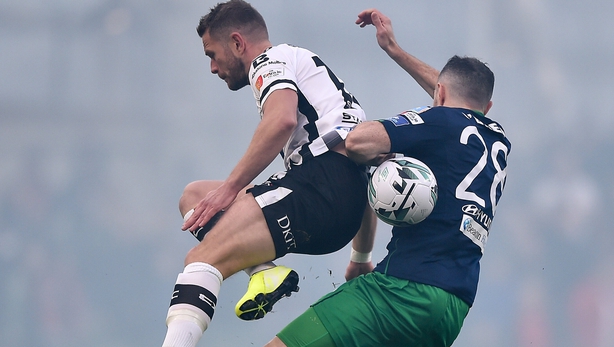 Dundalk went back on the attack in the 56th minute as clever play in from the right flank found Hoban with his back to goal, just inside the box.

The deftest of touches from the Galway native played the ball perfectly into the path of Murray in space on the edge of the box.

The midfielder looked to place the ball past Mannus into the corner, but the Rovers stopper was alert and down sharp to save.

Another great chance presented itself in the 69th minute as Dundalk had more joy coming in from the right.

This time the ball fell to McGrath in space and while the midfielder looked to whip it low past the near post, he diverted his effort wide with Gary O’Neill putting good pressure on the Dundalk man as he pulled the trigger.

Both managers made changes with Daniel Kelly and Neil Farrugia sent on to lively up their respective flanks, and it was the latter, who almost made an immediate impact with just over twenty minutes remaining.

The left-winger curled a tempting ball into the box and the arriving Finn burst through but he could not work the ball on target.

Rovers best chance came in the 73rd minute as Finn, again, worked it in from the right, sliding the ball into the path of Burke.

The Ireland international kept his composure to make space for a shot but lifted the ball just over the bar, perhaps a slight deflection just helping it clear the crossbar.

Half chances at both ends came and went as both Kelly and Finn threatened down their respective flanks as the game moved into the final ten minutes.

It was the Hoops who kept knocking on the Dundalk door with Burke again testing the keeper inside the last five minutes.

Excellent play by Farrugia down the left to skip past Sean Gannon before delivering a fine ball to the arriving Burke.

The header was powerful and on target but again it was well read by Rogers who made no mistake with the save.

But Rovers were intent on ending this in regulation as Burke burst through the middle in the 89th minute.

This time, the midfielder spotted the run of Greene and the pass was inch-perfect into his path, the striker just getting there ahead of the advancing Rogers.

Greene hit the turf and the referee had no hesitation to point to the spot.

As the clock approached 90 minutes, McEneff would assume the responsibility of taking the vital spot-kick.

Low to the keeper’s right, the midfielder made no mistake as Rovers took the lead with just three minutes of added time to negotiate.

Wild celebrations greeted the goal as the former south terrace erupted, but there was still to be a twist to this Dublin 4 tale, as soon the Hoops faithful would stand silent.

Dundalk threw everything forward and with all three added minutes elapsed, a hopeful ball into the box was only half cleared and fell perfectly at the feet of Duffy who drilled an unstoppable effort into the roof of the net to take this game into extra time.

INCREDIBLE! Michael Duffy, with a moment of absolute brilliance, rescues Dundalk with seconds to go. It's extra-time in the FAI Cup final! https://t.co/3OeMqqfxm4 #RTEsoccer pic.twitter.com/xUIo5yws7V

Rovers appeared shell-shocked for the opening minutes of the first period as Dundalk looked to capitalise on their growing confidence.

Neither side could really create, however, until the 11th minute of the first half as Jack Byrne came to life in the middle of the park to send Farrugia racing through.

The winger cut inside to try to take the retreating Dundalk defence out of the play, but Sean Gannon was alert and made a vital challenge to prevent the goalscoring opportunity.

Byrne again jinked his way through a host of Dundalk players two minutes later before feeding Greg Bolger who ran into a dead end, before Greene took a swipe at goal and blasted high and wide.

A Farrugia header that looped over the bar was the best that Rovers could muster in that second period, while Georgie Kelly had a great chance to win it for Dundalk in the final minute of extra time as the Lilywhites worked the ball into the box.

A scramble inside the six-yard box allowed the substitute the chance to get a strike on goal but a fine Mannus save ensured that penalties would decide this one.

The penalty shoot-out would take place in front of the Rovers fans and they were given a real boost as Duffy smashed his effort off the bar, before Cleary’s effort was saved by Mannus.

That allowed Rovers two bites at the cherry but they only needed the one as O’Neill dispatched the ball low into the left corner to complete the Drive for 25 after 32 long years of waiting.