As we enter round three of the 2015 Six Nations, Ireland sit second in the table behind England.

The difficulty Ireland face in trying to retain their title is highlighted by the fact that it has been 32 long years since they did so - in the 1983 Five Nations Championship.

That year they shared the title with France, as points difference did not apply, while the year before in ’82 Ireland took the title outright.

Tom Kiernan was the man in charge of the side for both championships.

In 1982, his side prevailed over Wales, England and Scotland to claim a first Triple Crown in 33 years, before a final day 22-9 defeat to France in Paris scuppered hopes of a second Grand Slam in Irish history.

However, they had still done enough to take the title by a point from England and Scotland in joint second.

The following year Ireland again overcame England and Scotland, and gained revenge for the previous year’s defeat to Les Bleus, but this time Wales were to prove Ireland’s undoing, with the Principality coming out 23-9 winners in Cardiff in round three.

Fred Cogley was the man in the commentary box for RTÉ for both championships and recalls that Ireland’s win in 1982 came very much out of the blue for the rugby world.

“There were no real prospects of the Grand Slam in ‘82. It was the Triple Crown that was the big attraction. In 1982 we had come towards the end of a dismal period of defeats and there was no great enthusiasm for an Irish side captained by Ciaran Fitzgerald,” said Cogley, talking to RTÉ Sport in his home in south Dublin. 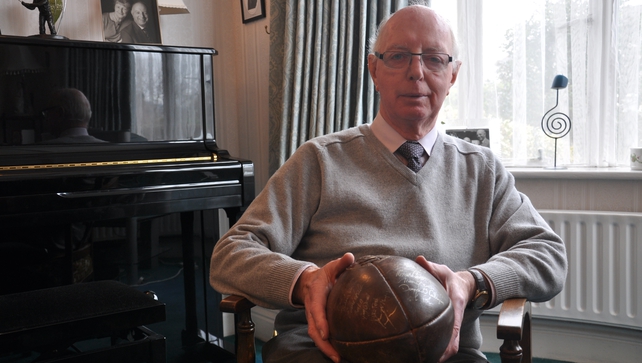 “And yet we went out and suddenly things began to happen. Fitzgerald created an atmosphere among the players, having taken over from Fergus Slattery.”

From the three wins in ’82, Cogley remembers the victory over England at Twickenham as the stand-out performance.

“The thing that stands out from ’82 is the great Ginger McLoughlin try against England and the conversion from Ollie Campbell out on the touchline that won it,” said Cogley.

“It was out on the touchline, against the wind, on the right. He converted, which put us in a winning position. Although England came back it wasn't enough to deny Ireland the win.

“The Scotland game in ‘82 was a poor game. Lots of even situations came down in favour of Ireland, but it could have gone either way.

“Getting beaten in Paris was a habit for Irish teams back then. We were bullied out of it in a very physical game.”

Campbell had come into the side in ’82 and Cogley recalls that his influence in the No 10 shirt proved the key to Ireland developing as a cohesive unit that could out-think the opposition.

“Campbell was outstanding in ‘82 and demonstrated what had won him the out-half position following the controversy a couple of years earlier about whether he or Tony Ward should be out-half,” said Cogley.

“Ward was a different type of player - very individualistic and inspiring.

"Campbell was more orthodox and gave everyone a chance of knowing what was on – what was the next play. Wardy played off-the-cuff, which was difficult for opposition players, but also difficult for his own players.”

The back-to-backs also marked a sea change in the tactics of Irish rugby; an evolution has left its imprints on the Irish teams of the last 30-odd years.

“In ‘82 and ‘83 the style of play that Ireland produced was different to what had come before, which was usually a series of Garryowens and very basic,” said Cogley.

“With Campbell orchestrating the way things happened, and a good pack with Willie Duggan at No.8 they changed the way Ireland were expected to play.

“1983 was much the same team as '82, but the performances weren’t as good. The other teams had understood the game-plan and countered it far more effectively. If Ireland started flinging it around the opposition clobbered them and closed down the game.

“The ‘82 and ‘85 championship wins were more attractive victories in terms of style.”

And what of the 2015 team compared to the ‘83 team. Cogley feels that it’s hard to draw comparisons between the sides, but that the out-halves certainly share similar qualities.

“It’s very difficult to compare professional Ireland teams to the amateur teams we produced that were great teams,’ said Cogley.

“The modern game is so much faster and the collisions are frightening at times. But you see the 2015 team might have the basis of a great team because it has someone like Jonny Sexton at out-half in the mould of the same type of control that Campbell brought in the ‘80s and Jack Kyle brought in 1948.

“Sexton is beginning to have the same effect as those two predecessors. But Sexton is different in that he tackles going forward.

“Schmidt’s coaching policy is to make sure there is a defence there. In the ‘80s it was the captain that took the lead, especially on match-day. Nowadays, the players are kept closely guarded by the coaches to keep their focus.

“And I think that is one of the key differences between the ‘83 team and the 2015 team – focus. The game-plan is also different in that now the team can adapt far better to cater for the opposition.”