Ireland head coach Joe Schmidt has indicated that the reselection of Peter O’Mahony at blindside flanker in the Ireland pack to face France was down to his ‘physicality’.

Munster’s O’Mahony comes into the starting XV in place of Ulster’s Iain Henderson, who drops to the bench, with Leinster’s Rhys Ruddock dropping out of the match-day 23.

“It’s no disrespect to Iain, he’s still learning, and it was a great experience for him [to play against Italy] last weekend,” Schmidt said. “But Peter’s played really well in the three games prior to last weekend. He will bring that threat around the breakdown and that sort of physicality that he expresses on the field.”

On the bench, Leinster’s Ian Madigan is selected ahead of Ulster’s Paddy Jackson.

Schmidt highlighted Madigan’s versatility as the reasoning behind this decision. Madigan can play outhalf, centre or back three, while Jackson is an out-and-out outhalf.

“It’s been pretty combative and high paced [in the first four matches of the championship]. And we’re just starting to creak a little bit and we needed the coverage really,” said Schmidt.

“There’s nothing worse than an angry French team" - Joe Schmidt

“One of the things that happened in England is that we got a couple of niggles and we ended up not having as broad a coverage as we would like.

“If Johnny was unavailable we probably would have started with Paddy. It’s certainly no disrespect to what Paddy has done.

“I think he’s been great value so far. It’s just the eligibility to cover midfield, fullback or the 10 spot; so, it’s purely that.”

Schmidt also dismissed any concerns over Madigan being a little undercooked to be coming into the Ireland squad in the last round of the championship, highlighting his ability to score tries, past experience and versatility as the key reasons for his selection.

“I thought against Italy last year he came on and sparked the game up a little bit and showed some really good footwork,’ said Schmidt.

“Obviously Sergio Parisse reached out with his foot [to trip Madigan] and got a yellow card for it, so he can be a threat to the line, and he’s started at 10 in the northern tour of the United States and Canada, so he’s had experience at 10. Maybe not at this level, but those experiences will help him and he just gives us a little bit more coverage.

“He’s spent the last eight weeks training with us. He spent the three weeks with us in November, so he’s been a very consistent member of the squad.”

France have named six forwards on their bench, increasing their options for fresh legs in the pack on Saturday.

Schmidt highlighted the strength of France’s forward replacements as an area that Ireland are likely to be challenged in by Les Bleus.

“It’s not the first time they’ve done it in the Six Nations, with [Jean-Marc] Doussain, he covers nine and ten and gives them a little bit of flexibility where most teams have to use two players in those positions,” said Schmidt.

“We thought [Hugo] Bonneval might have been on the bench [to cover the back three], so it affords them the luxury of having some very big men come off the bench.

“I think that will be a very tough part of the battle for us, [Wenceslas] Lauret is another very combative man – a pretty exciting athlete. Very, very powerful, but quick.

“That may be a balance for Alexandre Lapandry, who has a massive work rate. I’ve had a bit of time coaching Alex and his tackle numbers are huge in a game. And his ability to cover the field is fantastic.

“So, if he does get a bit used up, I guess they have Lauret to come on for him, and that may be part of the thinking.”

The French side has come in for some stinging criticism from the French press following their narrow and fortunate victory over Scotland last weekend.

However, Schmidt believes this media pressure could end up helping the French squad’s mentality ahead of the clash with Ireland.

“We’re a little bit isolated down here [at Carton House, Co Kildare] and we just get on with what we’re doing, which was nice in the last game where there was a lot of hype around Brian’s [O’Driscoll] last game at Lansdowne Road.

“But at the same time we’re conscious that the press have been pretty tough on the French team. And it probably doesn’t help our cause to be honest.

“There’s nothing worse than an angry French team. When external forces put pressure on a group, it tends to galvanise the group.

“Their unity gets a little bit stronger. We’ve seen the French team do that before, in recent times [at] the 2011 World Cup. On the basis of their performance [in defeat to New Zealand in the final] that day they probably deserved better than they got. And yet two or three weeks before that they’ve been beaten by Tonga in the pool stages. So, that is the type of talent that they have as well.”

As for the mercurial French backline, Schmidt sees danger all across that division.

“We’ve had a good look at the French players this week, and there is nobody there where we can say we can stop that threat without having to put a guy either side to stop them,” said Schmidt.

“The footwork and acceleration from [Brice] Dulin at the back, [Maxime] Medard, I think [Yoann] Huget is world class, he’s been exceptional in every facet of the game.

“Then in midfield, [Mathieu] Bastareaud, I don’t think he ever gets taken in the first tackle; he breaks those tackles.

“And Gael Fickou, you only have to see the impact he makes off the bench, that super try he scored against England, to steal that game from the English in the first round.

“I think with that back division there, their halves are a little bit more settled, Remi Tales was their initial selection, before he got injured and [Jules] Plisson came on.

“And [Maxime] Machenaud, we know a bit about him. He knows about some of our players, one in particular [his Racing Métro team-mate Johnny Sexton].

“So, I guess it’s going to offer up something really intriguing, but a very physical battle.” 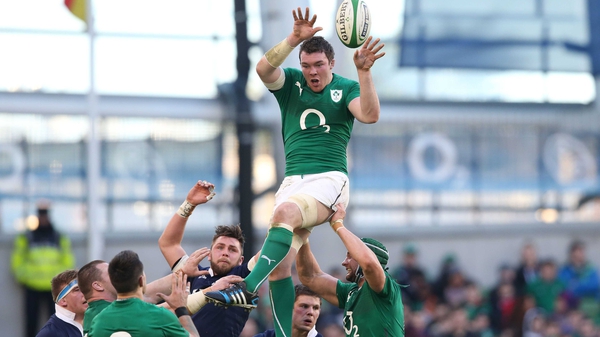