Ireland secured a competent 28-6 victory over Scotland at Aviva Stadium to get their 2014 RBS 6 Nations campaign off to a winning start.

Joe Schmidt’s team endured a sluggish commencement to the tie as they led by just 6-3 approaching half-time, with Jonathan Sexton slotting two penalties for Ireland, and Greig Laidlaw replying with one for Scotland.

However, an Andrew Trimble try on the stroke of half-time had Ireland 11-3 ahead at the break.

From there the home side went from strength to strength as they crushed their northern Celtic rivals in the second period.

Tries from man-of-the-match Jamie Heaslip and fullback Rob Kearney, combined with seven kicked points from Sexton, ensured that there was no way back for the Scots as Ireland claimed a 12th Six Nations victory over the men in blue.

Ireland captain Paul O’Connell’s withdrawal due to a chest infection on the day of the match came as an initial mental fillip for the visitors, as the Munster man was replaced in the starting XV by Dan Tuohy, with Iain Henderson coming in on the bench, and Heaslip assuming the captaincy.

The first scoring chance of the encounter in Dublin 4 went to Scotland after five minutes. Chris Henry was caught sealing off a ruck just outside the Ireland 10-metre line, with referee Craig Joubert penalising the Ulster flanker. However, scrumhalf Laidlaw hit the left upright with the resulting spot kick. It was an early let-off for the men in green.

Ireland also went close early on, with a maul from a lineout within the Scottish 22 getting right to the line, only to collapse at the critical moment, giving Scotland the put-in to the resulting scrum on ten minutes.

Joe Schmidt's team didn’t have to wait much longer for the match’s opening score when Kelly Brown was pinged for failing to roll away from a tackle on fullback Rob Kearney. Sexton slotted the kick from left of the posts, midway between the 10 and 22-metre lines.

The Scots were by the far more dominant side in the first quarter; however, and were awarded another penalty at the breakdown on 19 minutes. This time, from right of the sticks, and outside the 10, Laidlaw made no mistake to level the scores at a penalty apiece.

Within two minutes Ireland were back ahead. The Scottish backline was caught offside as they came up too quickly on the Irish offence. From just left of goal and outside the 22, Racing Métro outhalf Sexton hit his second penalty of the day and bisected the posts.

Despite holding the lead, it was far from an assured opening for Ireland, as the Scots controlled 57% of possession and looked the more dangerous of the two sides.

That dominance was very nearly rewarded with a try when David Denton picked from the base of a scrum inside the Ireland five; the Scotland number 8 was stopped inches short, with Dave Kearney, Heaslip and Conor Murray making a superb triple tackle and pushing Denton into touch.

Although Ireland were failing to create much going forward, their defensive play was solid as they repelled wave after wave of Scottish attacking play, with Sexton ably clearing Irish lines to touch near halfway.

And from that stable defence, Sexton gave the game its first genuine moment of brilliance. The number ten made a clear line-break from inside his own half, glided past six defenders and surged into the Scottish half.

As space was closed down by the defence, Sexton unleashed a superb wide pass to Heaslip on the left touchline, but a last-minute tackle from Max Evans pushed the backrower’s foot into touch to prevent the match’s opening try.

Irish tails were up though, and for the last two minutes of the half they attacked the Scottish line with gusto.

Having drawn in the defence with repeated attacks around the breakdown, the ball was spread wide right were Andrew Trimble was put into space to cross the whitewash for a five-pointer.

Sexton missed the conversion from the right touchline, leaving Ireland with a somewhat misleading 11-3 lead at the interval.

After the break it was first blood to Scotland, as Ireland lock Devin Toner was penalised at the breakdown and Laidlaw, from right of goal and inside the 22, hit his third successful penalty of the clash to reduce the arrears to five.

That penalty aside, Ireland looked very strong inside the first five of the second period. And from a lineout inside the Scottish 22, they got their just reward.

Lock Tuohy took the ball in the air and the green pack devastated Scotland with their maul, barging over the line with Heaslip touching down for the try. Sexton converted from left of goal to put Ireland 18-6 ahead and in the box seat.

All the urgency and aggression was with Ireland at that point as they bombarded the Scottish 22 with phase after phase of attack.

Scotland defended stoutly, but were eventually pinged for killing the ball at the breakdown, allowing Sexton the opportunity for another pop at goal. From right of the sticks, on the 22, he slammed the ball over to give Ireland a handsome 15-point lead.

At this point Scotland were on the ropes and interim coach Scott Johnson brought on Richie Gray and Johnnie Beattie in an attempt to regain control of the forward battle.

However, they continued to struggle, with Ireland’s pack maintaining the upper hand as loosehead Cian Healy made a superb break from which Ireland failed to capitalise.

As the game approached the closing stages, the tie opened up with both sides spraying the ball across the park in open-field attacks.

And Ireland were the team who managed to capitalise on this space. Tuohy rampaged to the edge of the Scottish 22, offloading to Chris Henry to set the breakdown.

Rob Kearney was fed first-phase ball and the fullback used a combination of power and agility to evade three defenders and touch down for a five-pointer on the occasion of his 50th cap.

Sexton's conversion from left of goal put the score at 28-6 with just seven minutes remaining.

The Scottish pack went in search of a consolation score, but referee Joubert called a further penalty in midfield as the blue pack failed to release on the deck. The goose was cooked at this stage, and mentally the thistle appeared to have lost its prickle.

As the clocked ticked towards the red, it was in fact Ireland who looked most like getting the game’s final score. They were camped in the Scotland 22, with Sean Cronin and Jack McGrath barreling to within inches of the white line.

From there, replacement outhalf Paddy Jackson kicked crossfield for Dave Kearney to collect the ball following an awkward bounce and touch down. However, that icing on the cake was ruled out by the TMO Carlo Damasco, as he adjudged the ball to have bounced on the line.

It was to be the last action of the tie as Ireland claimed a 22-point victory to commence their championship with a solid win, most memorable for their recovery from an uninspired opening half an hour to dominate the Scots in the second period.

Schmidt’s team will now host Wales next Saturday with their 2014 Grand Slam dreams very much intact. 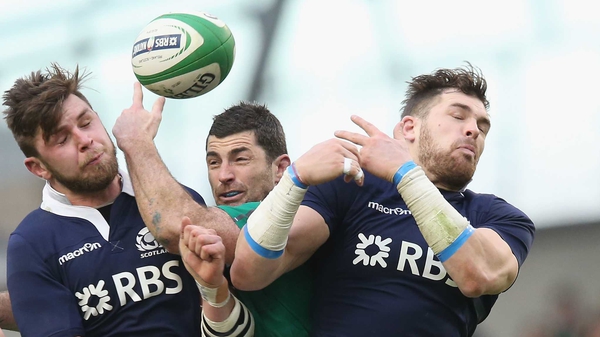 Rob Kearney ‘delighted’ to get off to winning start