Playing Scotland has been a happy hunting ground for Ireland in the Six Nations.

Just one of those Scottish wins has come on Irish soil, in 2010, when Dan Parks heroics with the boot prevented Ireland claiming a Triple Crown at Croke Park.

The sides have also met on three other occasions since 2000, in World Cup warm-ups in 2003, 2007 and 2011, with Scotland taking a further duo of wins in the latter two encounters, to take the recent win tally to Ireland 12-5 Scotland.

The consistency of Ireland’s success over their northern Celtic rivals is a very direct reflection of both sides’ position in the all-time Six Nations table, with Ireland sitting in third and Scotland fifth.

In short, a game against Scotland is one that Ireland have generally been able to count on for victory, whether at home or away, since 2000.

However, last year Ireland came very unstuck at Murrayfield in their 12-8 defeat.

Despite dominating possession and territory, Declan Kidney’s side simply lacked any cutting edge in the final third. They allowed themselves to make error upon error and failed to capitalise on field position, which ultimately led to the Scots’ confidence growing and performing daylight robbery with a backs-to-the-wall victory. 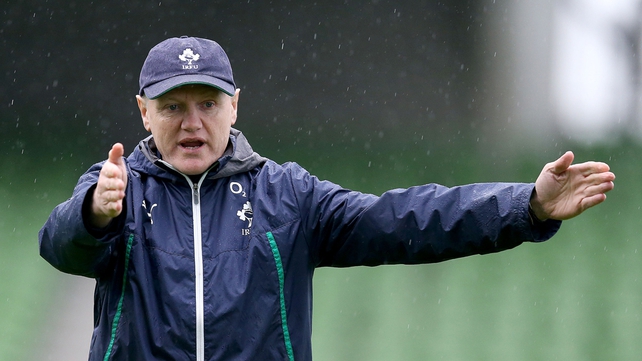 Joe Schmidt’s teams at Leinster rarely had that problem, playing decisive, attack-minded rugby, and had the connectedness to feed off each other with a rare level of incision that brought them two Heineken Cup victories.

The task for the former school teacher from New Zealand is to transfer that ability across to the green jerseys, whilst maintaining the core strengths that Ireland have displayed from 2010 to 2013: good set pieces, and strength at the breakdown.

The last time Ireland managed to meld both over a spring campaign was during the 2009 Grand Slam. Since that seminal season, Ireland have spluttered through games without showing a clear strategy of attack.

Last autumn’s defeat to New Zealand showed hope that the blunt nature of Ireland’s offence was beginning to change. But one swallow doesn’t make a summer, and Sunday’s encounter will either show regression or continued progression. The Irish rugby public waits with bated breath.

Eight players in 2013’s starting XV will also run out at Aviva Stadium on Sunday. On the Scotland bench, five were in the Scotland 23 last season.

Similarly, Ireland have eight starters from the clash last year, but on the bench only Sean Cronin was in last year’s squad as an unused replacement.

There is some real quality in this Scotland side. Notably in the back three, with Stuart Hogg, Sean Maitland and Sean Lamont, an extremely capable trio full of attacking brio, speed, intelligence and confidence.

In the centre, Alex Dunbar and Duncan Taylor are very much an unknown quantity. They have just nine caps between them and will be hugely tested by Brian O’Driscoll and Luke Marshall.

At half-back, the Lions pairing of Conor Murray and Jonathan Sexton has to be backed to dominate Greig Laidlaw and Duncan Weir. Laidlaw is a superb player, with skill and vision, and great skills out of hand and from the boot, but Weir has yet to show he can do it at this level. Racing Metro out-half Sexton will relish the prospect of going up against him.

The Ireland back three is stronger than it was last season too. Rob Kearney is retained, while his brother Dave, and Andrew Trimble offer a solidity that Craig Gilroy and Keith Earls failed to present last season.

Up front, Ireland are very strong. Cian Healy is in brilliant form, and is such a solid base to build a scrum and pack from at loosehead prop. Rory Best’s selection at hooker was a no-brainer given his recent return from injury, while Mike Ross will offer his usual stability in the scrum at tighthead.

The Scotland front row of Ryan Grant, Ross Ford and Moray Low offers plenty of experience for Scotland - with 107 caps between them - but it has a rather pedestrian look about it in comparison to Ireland’s 1-3. The Scottish trio has been maligned in the media this week for their scrummaging ability, but that may be jumping the gun a little.

The Scots will be keen to hold their own in this area. If Ireland are to establish forward dominance, it’s more likely to come in the form of dominating the breakdown, hitting their man in the lineout and using the maul, combined with strangling the Scotland back row of possession. 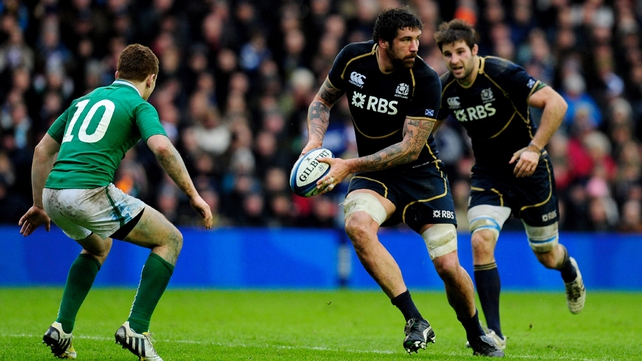 Jim Hamilton versus Paul O’Connell is the big match-up in the second row, and as accomplished as Hamilton is, at home, there is only one man you would back to come out on top there: POC.

Sean O’Brien’s absence through injury at openside flanker is a huge blow to Ireland, his go-forward ball and rampaging runs are one of Ireland’s main attacking platforms; he’ll be missed. Peter O’Mahony, Chris Henry and Jamie Heaslip will all be asked to back up their workload with ball-in-hand in order to make up for O’Brien’s absence.

Scotland’s six to eight is also strong. David Denton is a real talent, fantastic at winning groundhog ball, and also at creating go-forward momentum; stop Denton and Ireland will be on the way to victory in this Test match.

Kelly Brown is an able accomplice for Denton, but they will both need to be firing on all cylinders in order to gain an upper hand.

The inexperienced Ryan Wilson could be a weak link for Scotland and one that should be targeted early on.

Scotland have plenty of experience on the bench, with Richie Gray, Johnnie Beattie, Chris Cusiter and Max Evans offering real impact as replacements. It’s one of the strongest benches Scotland have named in a long time and shows the strength in depth they have developed over the last two years or so.

That said, Ireland’s bench is also hugely exciting. Every member of the replacements has the potential to crucially influence the game for Ireland; there should be no weaknesses as a result of their introduction to the game.

If Ireland dominate the forward battle, Scotland will struggle in this tie. And it looks, on paper, as though Schmidt’s pack – if they perform – will definitely have the upper hand.

From there, Ireland’s backline needs to display the creativity to mesh and finish off their chances. From 9-15 they look the stronger side. Laidlaw will play well, and give Scotland plenty of impetus from scrum-half, but beyond his influence, it’s hard to see Scotland creating enough try-scoring chances to do real damage.

An area Ireland have struggled in over the last two years is playing for 80 minutes. Against Wales in 2013 – their only championship win that year- they dominated for 45 minutes before struggling for the remainder of the match, and had to mount a fierce defensive rearguard at the close. Similarly, against New Zealand last autumn, Ireland were close to perfect for 33 minutes before running out of gas and ideas.

This needs to stop or Ireland will continue to lose matches, or struggle in them, during the final quarter.

If Ireland come in mentally right for this one, get their cohesion right in the backline, and do it for 80 minutes, it’s very hard to see Scotland overturning them.

Verdict: Ireland to win by 12.

LIVE: RBS SIX NATIONS
Live television coverage of the opening weekend of the RBS Six Nations from 14:00 on Saturday 1 and Sunday 2 February on RTÉ Two and RTE.ie (Ireland only).