Donal Lenihan believes this Saturday's series decider between Ireland and New Zealand is the ideal testing ground for Andy Farrell's side ahead of next year's World Cup.

A week on from winning their first ever Test match in New Zealand, Ireland will look to seal a famous series victory this Saturday, when the sides meet at Sky Stadium in Wellington.

The fortunes have changed dramatically for the tourists in the last few days. After defeats to the Maori All Blacks and then New Zealand in the opening week of the tour, some suggested Ireland were braced to lose all five games of their summer trip down under.

However, last week's historic win against the All Blacks was followed up with an impressive win from the second-string side yesterday against the Maori.

And although New Zealand remain favourites to clinch the series this weekend, it's nowhere near the consensus of 10 days ago, with huge question marks around their head coach Ian Foster.

Ireland boss Farrell has said that regardless of the outcome in the series decider, their tour has been a huge learning experience, especially with a World Cup looming in just over 12 months.

And former captain Lenihan says that the challenge facing Ireland at the Cake Tin will be the perfect replica of what they are likely to face at the World Cup next year.

"This is the type of challenge [needed]," he said on the RTÉ Rugby podcast.

"If you want to win a World Cup, you have to win a quarter-final, a semi-final and a final, three weekends on the trot. You couldn't get a better challenge in terms of having to back up what they did against New Zealand last week, and doing it again next week.

"That's where you'll really learn about where this Irish team are at."

Saturday's defeat for the All Blacks was their third loss in four games dating back to last November, with the pressure on both head coach Foster and his senior squad members growing by the day.

On previous occasions when Ireland have beaten New Zealand, the response from the All Blacks has always been to step up the physicality, but Lenihan believes their poor recent disciplinary record means this approach will be dangerous for the hosts to take.

"When we won in Chicago, two weeks later in Dublin was brutal, when we won in 2018 in Dublin, the World Cup quarter-final was brutal. Every time we've beaten them, they've come back and had massive physicality, but I think referees are looking at them now.

"They have stepped across the mark, and are under the microscope. Referees talk to each other."

And although the former Ireland captain believes Ireland have a great chance of pulling off their biggest ever series win, particularly if All Blacks lock Sam Whitelock remains unavailable, he thinks the task might just prove too much for the Triple Crown winners.

"If Sam Whitelock (below) starts, that's a game changer. If he doesn't then maybe I'd flip back towards Ireland. 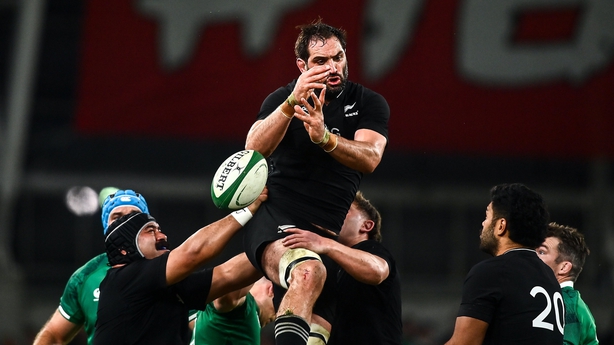 "There's nothing in it, New Zealand are favourites but I'm not writing off Ireland in any shape or form. I think they are capable of pulling off a back-to-back performance.

"Everything would say New Zealand are going to win. There's going to be a reaction, I think their team will be stronger, but I'm not writing Ireland off. They've been so consistent in terms of performances. The conditions may well make a lottery of the game. We've seen in all the games that there have been cards, it's just the nature of the way the game is played now.

"You'd have to think that New Zealand will respond and they don't want to lose a Test series here. They already have the shame, if you like, of being the first team to lose a Test match to Ireland on home soil, but there's incredible pressure on Ian Foster and his coaching team but also on the senior players. Sam Cane's captaincy is coming under question, his place in the team is coming under question.

"That pressure can implode if Ireland can put them under the same pressure they have in the last few weeks.

"New Zealand, I think, will probably win but I refuse to write Ireland off because I just felt all last week there would be a performance in them. Mentally, it's the biggest test. Can they raise their game again? Can they rise it another 10% which they will need, in order to win.

"From that point of view I'm fascinated."

RTÉ Rugby pod: It all comes down to a Test series decider between Ireland and New Zealand