Andy Farrell's Ireland XV kept up their tour momentum with a 30-24 win over the Maori All Blacks in Wellington.

Fresh from a first ever Test victory in New Zealand on Saturday, the tourists’ second string overcame a poor start in wintery conditions to run out deserved winners.

It was a sloppy affair in which the sides shared four yellow cards amidst numerous handling errors, and erratic lineout performances.

Farrell had kept all his front-liners in reserve but there will be some concern over Finlay Bealham, who came on as a replacement at the weekend, after the prop was injured in the warm-up.

But tries from Jordan Larmour (2), Nick Timoney and Gavin Coombes got the job done, while Ciaran Frawley kicked 10 points.

It was Ireland's first win in six attempts against a Maori selection and sets up the Test series decider on Saturday against the All Blacks at the same venue perfectly.

Although the rain stopped just prior to kick-off, the game was played in very difficult conditions with the Irish players initially struggling to adapt.

However, it didn't put the Maori off their game plan and their quick movement off the ball was causing all sorts of problems.

Ireland had barely found their feet before the hosts took the lead.

A short kick-off had led to a Keith Earls knock-on and from a subsequent lineout a simple backline move was enough to befuddle the Irish defence, with Shaun Stevenson coming off his wing to score in the corner.

There were more nerves evident in the Ireland side with Frawley knocking on and then missing touch from a penalty but a moment of vision put Ireland ahead.

Earls, captaining the team, picked up a ball on the sideline and Larmour spotted that the defence had gone to sleep.

Within a couple of seconds the Leinster wing (below) had taken Earls’ throw-in and was under the posts. 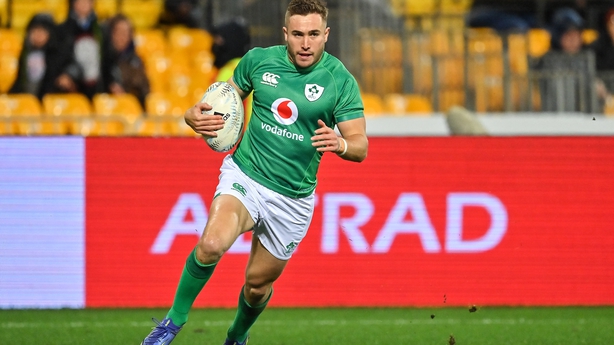 The Maori, who made six changes to their team that won the first clash 32-17, tallied 117 passes to 36 from the Irish in the first half but the visitors were more efficient once they got their lineout sorted.

Frawley kicked a penalty in the 26th minute when the Maori defence was too slow to roll away from a tackle and Ireland were in the ascendency.

Cian Prendergast was sin-binned for not retreating 10 metres after a penalty but Kieran Treadwell turned the ball over in the next phase and Ireland went the length of the field to grab their second try.

Before that, prop Ollie Norris was yellow-carded after coming in from the side to half a maul close to the line; Ulster flanker Timoney then stretched over to extend the Irish lead (below). 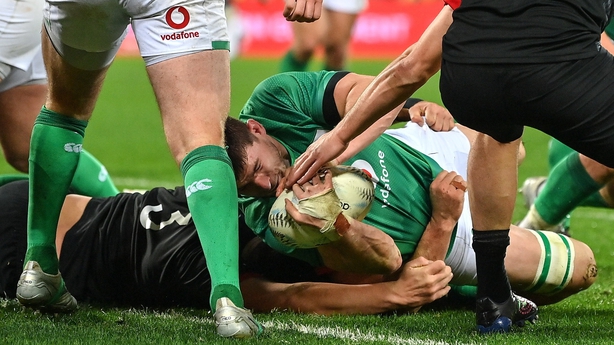 Craig McMillan’s side almost hit back straight away when Caleb Delany broke the line but Stuart McCloskey got a hand on TJ Perenara to stop the move, the intervention came much to the chagrin of the captain who told referee Karl Dickson what he thought.

Still, Ireland went in 20-5 ahead at the break.

That margin was cut quickly to eight points when the officials awarded a penalty try to the Maori, who had 10 Hurricanes in their starting line-up.

Delany made a burst down the left wing and passed inside to Connor Garden-Bachop.

However, Larmour got his timing wrong and tackled the supporting winger before he received the ball. Dickson ran under the posts to award the penalty try and Larmour went in the bin. 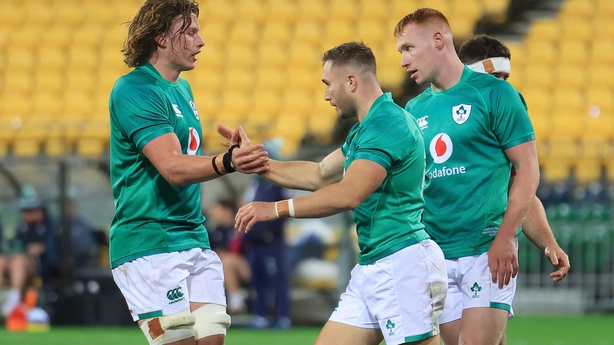 The game became a scrappy affair with both sides struggling at the lineout, the stop-start nature suiting Ireland with their two-score lead.

Ryan Baird and Ed Byrne were introduced as bodies began to tire, while Joey Carbery came on for Mike Lowry after the Ulster back shipped a heavy tackle.

But, importantly, it was being played deep in the Maori half and Coombes was on hand to barge over after a sloppy lineout ball bounced Ireland's way. Frawley’s kick was off target but Ireland led by 13 with 12 minutes to play.

The Maori weren't finished yet though. 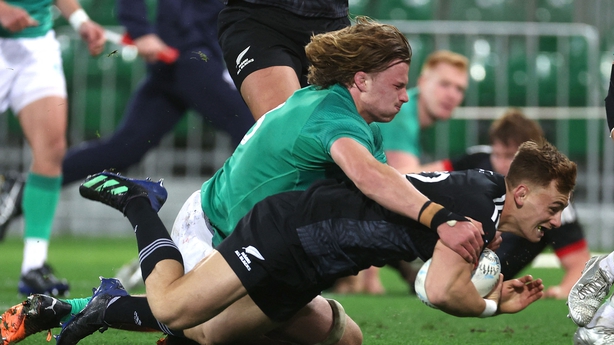 Replacement Ruben Love, taking the ball on his own 22, cut through the Irish defence before passing to Cullen Grace on the wing; Love was in position to take the return pass and dive over for the try of the match.

However, the kick went wide meaning they still needed two scores and when Stevenson went in the bin after a poor interception attempt as Carbery tried to send Jimmy O’Brien away, the game was up.

Larmour’s late score in the corner, off a super bullet pass from McCloskey, finished off any lingering home hopes, making Brad Weber’s over-time try under the posts academic. 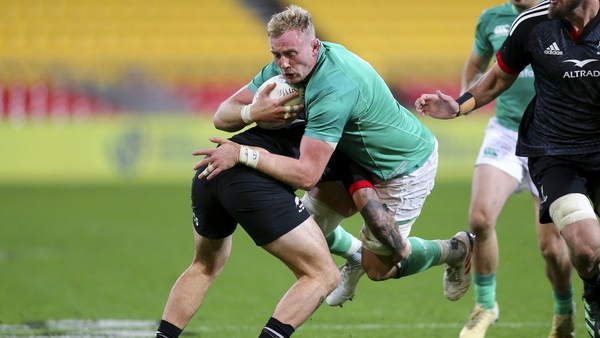 Ratings: Treadwell and Coombes star in win v Maori side