Ireland recorded their first ever victory over the All Blacks on New Zealand soil with an accomplished performance in Dunedin.

Two tries from Andrew Porter and 13 points from the boot of Johnny Sexton secured the victory that ties up the series ahead of a decider in Wellington next Saturday.

History was made at the 15th attempt and Ireland backed up their talk during the week when they had pointed to the small margins that went against them in the first Test.

Right from the start, Ireland were on it. The set-piece was solid and from there Ireland build a foundation from which to dominate.

New Zealand lost two men to yellow cards and had prop Angus Ta'avaom sent off in the 31st minute, but they were the result of Irish pressure and there was no doubt about the merits of the result.

Having beaten the All Blacks for the first time in Chicago in 2016 and followed that up with two home victories, this statement win will be the sweetest of all for Andy Farrell and the team. 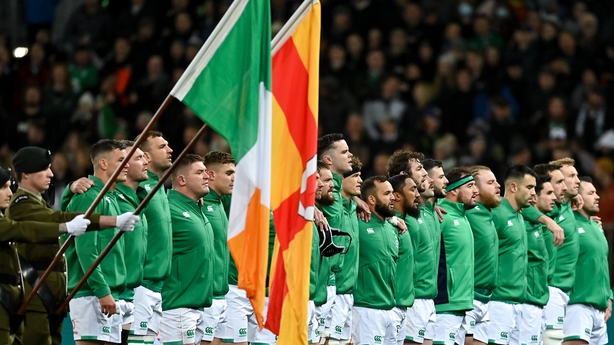 Just like the opening Test it was Ireland who got on the board first.

It took just three minutes for Andrew Porter to barge over close to the posts following breaks by Tadhg Beirne and Josh van der Flier with Mack Hansen popping up in support.

Ireland sucked in the New Zealand defence and Sexton fed the Leinter prop who powered over. 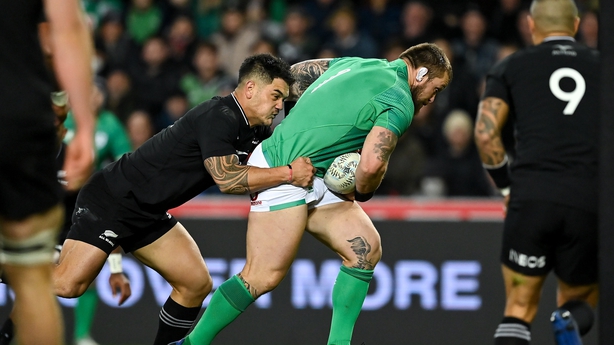 The visitors remained in the front foot with the lineout in much better shape this time around: Tadhg Beirne stole a throw, Caelan Doris got over the ball to win a penalty, which Sexton slotted over from 40 metres.

Then the action began in a crazy second quarter.

Leicester Fainga'anuku was late on Hansen and collided with the Australian's head. Yellow card said Jaco Peyper but a sloppy maul from the resulting lineout scuppered the chance. 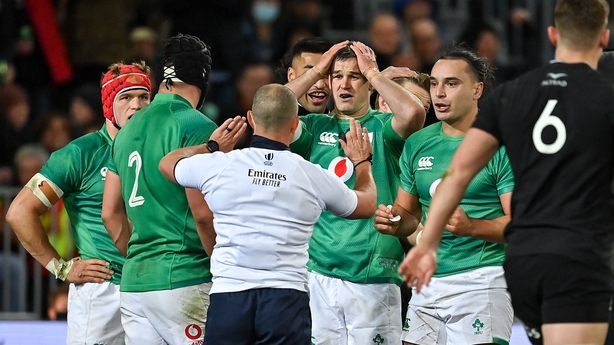 Ireland pressed again and should have had a penalty try. TMO Tom Foley brought Peyper's attention to an off the ball tackle by Ofa Tu'ungafasi on Garry Ringrose after a clever counter by Sexton.

However, it was just a yellow for the prop and even though the two sin-binnings overlapped for two minutes, Ireland still couldn’t add to their tally against 13 men.

Angus Ta'avaom who had come on to scrummage, then stepped into Ringrose and their two heads collided with a sickening crunch, which bloodied both men. 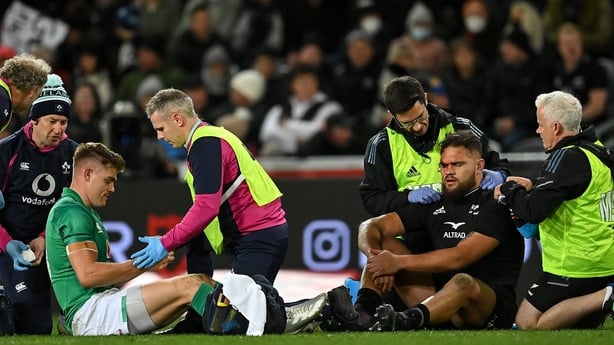 Ta’avaom saw red and Ringrose departed for a head injury assessment from which he did not return with Bundee Aki, who had one of his finest games in green, taking his place.

Amidst all this, Ardie Savea was brought off as New Zealand couldn't fulfill their scrum obligations, but it seemed to be a mistake by the management as the influential number 8 was then barred from returning as the second yellow card ran out. 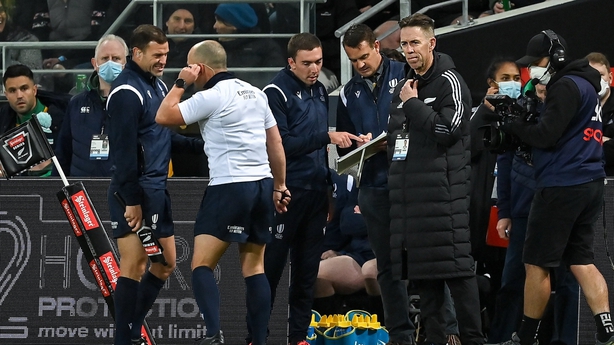 Codie Taylor could have seen yellow for a cynical maul stop close to the line but was let off; Sexton called for a scrum with the All Blacks short in the backline but the subsequent move lacked the necessary calm and James Lowe knocked on.

From there the hosts worked their way up the field as Ireland’s discipline fell apart. James Ryan was twice penalised for offside and the second offence led to a yellow card.

Of course, New Zealand needed no second invitation and Beauden Barrett dived on a loose ball under the posts, Ireland’s desperate appeal for a knock on was in vain.

Somehow, the three-time world champions, who were missing talisman Sam Whitelock, found themselves just a penalty behind at the break.

The game restarted with no let-up in the manic nature of the contest. Brodie Retallick departed for a HIA with Patrick Tuipulotu coming on. Scott Barrett stole an Irish lineout and then Gibson-Park got turned over.

Still, no panic. Aki and Beirne fed off Sexton passes to break the line and this time Ireland held their nerve to work the phases. Porter spotted the smallest of gaps in the black line and barrelled over under the posts in the 48th minute. 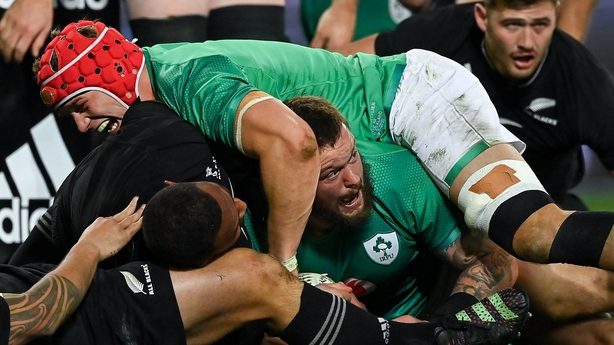 Sexton, who played after passing HIA tests after last week's 42-19 loss, converted and then added a penalty to push the margin out to 13.

But the out-half missed touch from another penalty and Jordie Barrett looked to have broken the line but Doris pulled off a miracle tap tackle; George Bower was next up but got isolated and Ireland won a penalty with Gibson-Park getting over the ball.

Peter O’Mahony picked up a loose ball and booted it long for a 50:22. Herring, who had just replaced Dan Sheehan, was intercepted but, an illegal challenge at the next ruck handed Sexton a penalty in front of the posts and Ireland were ahead by 16 with 12 minutes to play.

Half-backs Richie Mo’unga and Folau Fakatava had come on for New Zealand, while Conor Murray, Jack Conan, Kieran Treadwell, Cian Healy and Finlay Bealham entered the fray to see out the final moments.

Sexton, who ran the show throughout, hurt his leg clearing the ball with Joey Carbery coming on to see out the game. 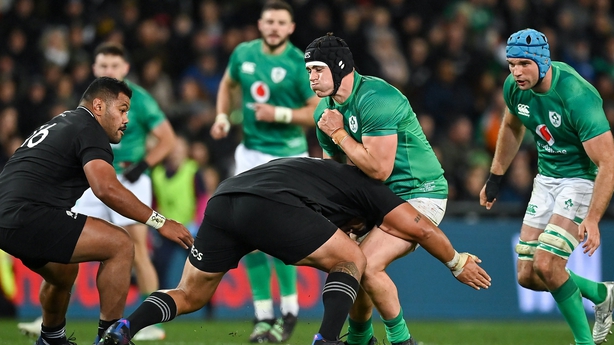 Beirne gave away a silly penalty but O’Mahony got a hand under the ball when New Zealand got it over the line.

Ian Foster’s side pounded the line but the Irish defence stood firm, each tackle and ruck eating up the precious seconds that meant the home side, who had never lost in seven previous Tests here, wouldn’t have time to get the required scores.

Replacement wing Will Jordan finished off in the corner after Jordie Barrett evaded Carbery’s tackle but it was too little, too late and Ireland had made history. 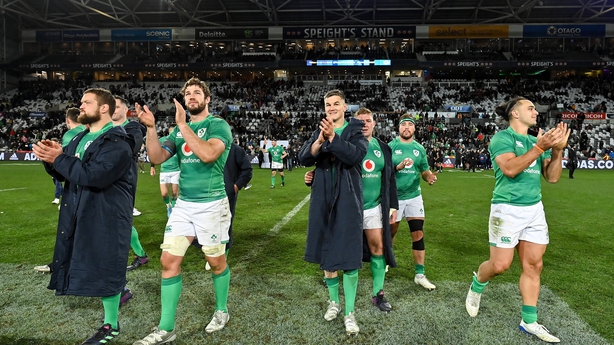