Safety campaigners have warned that rugby's head-injury checks are "being exposed" after Johnny Sexton was selected for Ireland's second Test against New Zealand.

Talismanic fly-half Sexton failed an on-pitch assessment in last weekend's 42-19 first Test defeat by the All Blacks, leaving the field and not returning.

Ireland confirmed earlier this week that Sexton passed the latter stages of the head-injury assessment (HIA) process, however, leaving the 36-year-old available for Saturday's second Test in Dunedin.

Sexton was duly named in Ireland's starting line-up, in a move that raised concerns with safety campaign group Progressive Rugby, who previously spoke out on this tour after the return of Jeremy Loughman to the field against the Maori All Blacks.

"In our view, this is sufficient evidence, regardless of subsequent testing, to exercise extreme caution for the good of both their short and long-term health.

"This caution must be further amplified in players with a history of brain injury, as evidence is they are at higher risk of sustaining further concussions and other injuries.

"Regrettably, the HIA is being exposed. Last week the process again failed to diagnose a clear and obvious brain injury (Jeremy Loughman), while three days later we are told it has identified a phantom one (Sexton).

"The fact is there remains no examination by any expert that can demonstrate a brain has healed and is not at risk of further damage. As such, if player welfare is truly the game's number one priority, the only option must be to err on the side of caution - otherwise the new elite protocols are failing in their key purpose."

Sexton turns 37 next week and has battled with head knocks and the perception around them his entire career.

The Leinster playmaker slipped and collided with New Zealand's Sam Cane's legs in the first Test, leading to his removal from the Eden Park clash.

Governing body World Rugby was contacted for comment, while Ireland and Sexton have remained confident all protocols were fully followed. 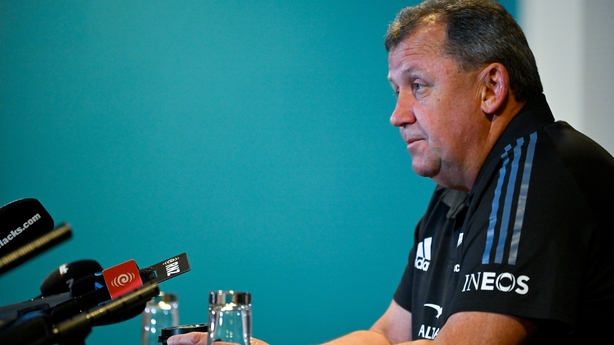 New Zealand will be without Sam Whitelock after the experienced second row displayed delayed signs of concussion and asked prior to the Irish team being named, if he would be surprised that Sexton was included, All Blacks head coach Ian Foster (above) said: "All I know is the protocols that we are trying to apply are pretty simple and clear to understand."

He added: "I can't answer that question from [Ireland's] perspective because I don't know the circumstances.

"What I do know is that from our perspective with Sammy is, the protocols are crystal clear.

"If it looks like you have taken a knock and then you fail a HIA, you go to a 12-day programme. That's pretty crystal clear to us."

Meanwhile, World Rugby has stressed that failing the HIA1 on-field assessment does not automatically mean a player has sustained concussion.

"It is the duty of any individual or organisation commenting on the Head Injury Assessment process to do so using the facts," a spokesperson said.

"Attempting to diagnose a serious medical condition like concussion from afar, without all the relevant information including a player's medical history, is irresponsible and no substitute for the world-leading medical care received by elite rugby players.

"Doctors are supported by the Head Injury Assessment and recently updated return-to-play protocols put in place by World Rugby.

"These protocols are developed using scientific evidence and independent expert opinion which are kept under constant review, as we never stand still on player welfare."