Ireland prop Jeremy Loughman should not have returned to play in Wednesday's match against the Maori All Blacks after suffering a head knock in the opening minutes, New Zealand Rugby (NZR) said on Friday.

Loughman had difficulty getting to his feet after the blow but was allowed to return to the pitch after a Head Injury Assessment (HIA) performed by a local doctor.

He was withdrawn by his team at half-time as a "precaution".

The incident attracted the concern of player welfare advocates, with lobby group Progressive Rugby describing it as "deeply alarming".

NZR conducted a review of the incident and medical manager Karen Rasmussen said on Friday that a "gap in communications" had led to video of the incident being "not fully accounted for" during the HIA.

"As a result of this review NZR believes Ireland prop Jeremy Loughman should not have been allowed back on to the field during the first half," she said in a statement.

"We will be reinforcing the full HIA process and protocols for the remainder of the series to ensure video evidence is communicated more accurately between independent match day medical staff to enable them to make the right call with regards to player safety."

The Loughman incident came a week after World Rugby announced an extension to 12 days of the period before players who have concussion symptoms are allowed to return to action.

Repeated concussions and head injuries in contact sport have been linked to the early onset of dementia and other long-term health issues.

Progressive Rugby welcomed the admission, tweeting that it was "impressive" that the mistake was acknowledged within 36 hours.

Loughman's replacement on Wednesday, Cian Healy, had to be taken off the field on a motorised stretcher with an ankle injury, leaving Ireland facing a potential shortage of props for Saturday's first Test against the All Blacks.

Healy was named as a replacement in the team for the match with coach Andy Farrell saying he was "optimistic" the prop would be fit to play at Eden Park.

Leinster prop Ed Byrne is due to arrive to the country on Saturday morning to provide cover. 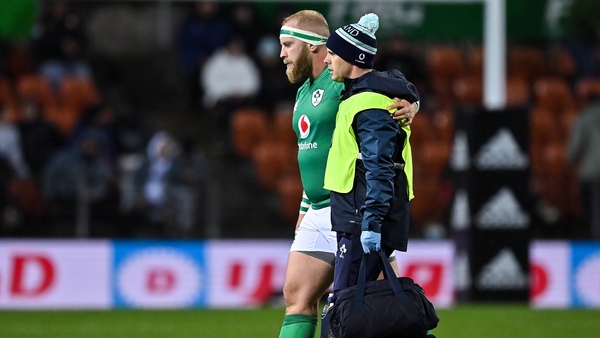