If Leinster could have hand-picked the scenario for a Heineken Champions Cup semi-final, almost every element of today's meeting with Toulouse is how Leo Cullen would have wanted it.

Their frustrations over the game that wasn't in Montpellier are now forgotten, and they have the home semi-final they craved.

They're pretty much at full strength, with James Ryan and Rónan Kelleher both marking their return from injury last week unscathed.

Their quarter-final against the Leicester Tigers went about as well as can be expected, coming out hot and virtually putting the game to bed inside the opening half, and although they lost the second 40 on paper they were never in danger of being reeled in by the Premiership leaders.

They're well rested too. Their typically good URC form allowed Cullen rest his frontline players for their recent trip to South Africa, and they looked fresh for the break at Welford Road, particularly in that opening quarter.

Meanwhile, their opponents Toulouse needed gruelling extra-time and penalties to see off Munster last week in Dublin, and also had to play a loaded team the week previous in their crucial Top 14 meeting with La Rochelle.

All signs point towards Leinster, but we've been down this road before.

Since they returned to prominence in 2017 under Cullen and Stuart Lancaster, Leinster have been expected to win.

After some mixed seasons of transition in the mid 2010s, their semi-final Champions Cup run in 2017 indicated they were back. And then they kicked on.

When they won the double in 2018, it was clear they were here to stay, and while they have consistently contended since then, a second European title for this generation has remained out of reach.

Sure, they have mopped up the titles domestically, winning four Pro14 crowns in a row, and will be favourites to make it a fifth in a row this season, but that dominance only serves to highlight their missed opportunities in Europe.

In recent seasons they have been standard-setters both on and off the pitch, with their production line of talent the envy of the rugby world, their squad depth allowing them to keep their best players looked after, and their first choice XV being not far off an Irish Test squad.

With all that in mind, one European Cup in this five-year run at the top would seem to be a small return.

Granted, it's one more than Munster, or Clermont, or Racing have lifted, but none of those sides have had the same level of domestic dominance to fall back on. The criticism may seem harsh, but that's the standard Leinster have set for themselves.

The frustration for Leinster is that winning isn't a glass ceiling for them. Eleven of today's matchday squad were on the field in Bilbao in 2018 when they edged past Racing 92, while as many of today's group have experienced a Six Nations Grand Slam with Ireland.

It's similar to the charge levelled at Alex Ferguson and Manchester United, whose two Champions League success in 1999 and 2008 don't seem to weigh up right against the 13 Premier League trophies across his tenure. Victims of their own success.

They haven't flopped since 2018 though; in the 2019 final in Newcastle they came face to face with a Saracens team who were at the peak of their powers, but their 2020 quarter-final defeat to the English side - who by now had been relegated to the Championship following the salary cap scandal - was a major shock.

Again they returned to the semi-finals in 2021, but were bludgeoned by La Rochelle at Stade Marcel Deflandre.

All the while, Toulouse have been growing and growing. Their win against Leinster in the pool stages of the 2018/19 competition was a shock at the time, with the French side at the start of their rebuild following a period of mediocrity.

By the time the sides met in the semi-finals later that season, it was clear Toulouse were the real deal, and it took a quality performance from the defending champions to win that game 30-12.

At the time, the two teams had won a joint-record four Champions Cup titles each, and if you had been asked three years ago to guess who would be the first to get a fifth star on the jersey, it would have been hard to look past the Irish side.

But Toulouse's journey back to the top didn't take long. Having reached another semi-final in 2020, they went one better in 2021, making the final at Twickenham where they won a scrappy decider against fellow French side La Rochelle. It might seem like skipping the queue were Ugo Mola's side to do it again this year.

The frustration for Leinster is that winning isn't a glass ceiling for them. Eleven of today's matchday squad were on the field in Bilbao in 2018 when they edged past Racing 92, while as many of today's group have experienced a Six Nations Grand Slam with Ireland.

On paper, this Leinster side are too good for Toulouse.

Seven days ago, the champions needed a second-half comeback, extra-time and penalty kicks to see off Munster, and while Johann van Graan's side put in one of their best performances in recent seasons, they still were dealing with an extensive injury list, Tadhg Beirne, Dave Kilcoyne, Gavin Coombes and Andrew Conway all missing, not to mention RG Snyman.

Even if they don't get the same level of disruption on the Toulouse breakdown, their ability to guarantee their own rucks has been their point of difference.

Munster gave Leinster - and others - a blueprint for how to play against Antoine Dupont, swarming the scrum-half at every available opportunity.

The one area Toulouse dominated last week was at the scrum, with loosehead Rodrigue Neti putting Stephen Archer under enormous pressure in the opening half, and late pressure from Cyril Baille and David Ainu'u set up their equalising score in the 76th minute of normal time.

Against a front row of Tadhg Furlong, Kelleher and Andrew Porter (all below), not to mention the backups of Michael Ala'alatoa, Dan Sheehan and Cian Healy, Leinster should be able to get parity - at least - at the setpiece. 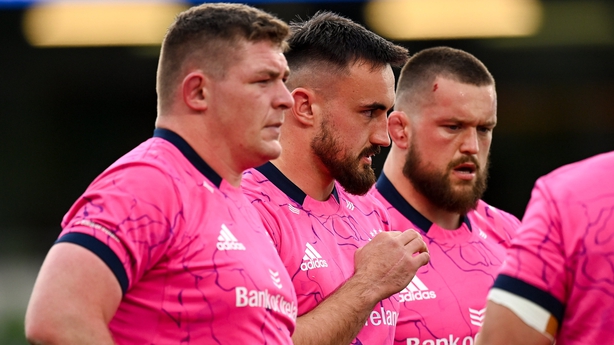 And although their semi-final defeat to La Rochelle a year ago was put down to an inability to deal with the big, burly gainline monsters employed by the French sides, the rejig of Porter from tight to loose in the scrum, and the signing of Ala'alatoa from the Crusaders has injected a bit more power into the Leinster pack.

Cullen will have seen how Munster attacked the Toulouse breakdown last week, with Van Graan's side winning a staggering 19 turnovers in comparison to six for the visitors. And while nobody would be expecting Leinster to repeat that number, it's an opening that the likes of Porter, Caelan Doris and Josh van der Flier will look forward to attacking.

Even if they don't get the same level of disruption on the Toulouse breakdown, their ability to guarantee their own rucks has been their point of difference.

They looked a beaten docket in the first leg of their Round of 16 with Ulster, before Ntamack's late try gave them a fighting chance in Belfast. Six days later they again seemed to be on the ropes, before outlasting Ulster in the final rounds.

On the BBC Rugby Union Weekly podcast, Danny Care and Chris Ashton were gushing in their praise, while on the RTÉ Rugby podcast Donal Lenihan was equally effusive.

"Look at the quality of Leinster's breakdown work, the speed of their recycle," he said.

"Everyone has been talking about Jamison Gibson-Park, and he's been playing great rugby this year, but all of that is facilitated by the quality of ball they get at the breakdown.

"Leinster have brought this to another level, and while everyone works on their setpiece, the breakdown is where it's at at the moment. That's giving them an edge in the game."

Even allowing for the off-the-cuff influence that Dupont, Ntamack and Thomas Ramos have in their locker, Leinster do look the more rounded group, with question marks over the depth of quality in the Toulouse midfield, especially against Garry Ringrose and Robbie Henshaw.

The biggest hurdle for Toulouse to get over is the mental and physical toll of last week's visit to Dublin, a game which was draining on multiple levels.

But time after time this season they have gone to the well and returned with a full bucket. They looked a beaten docket in the first leg of their Round of 16 with Ulster, before Ntamack's late try gave them a fighting chance in Belfast.

Six days later they again seemed to be on the ropes, before outlasting Ulster in the final rounds. And a week ago they were 10 points down with 15 minutes to play against Munster, before finding a way to win.

The lesson for Leinster to take from those recent European games is that to beat Toulouse, you need to show no mercy when you find the weakness.

And with an average of 50 points and seven tries per game this season, Leinster shouldn't need a second invitation to do so.