Leinster boss Leo Cullen has named an unchanged side to take on Toulouse in tomorrow's Heineken Champions Cup semi-final at the Aviva Stadium (3pm).

Bidding for a fifth title, Cullen has retained faith in the XV that saw off Leicester Tigers 23-14 in the quarter-final last weekend.

There is just one change on the bench with utility back Ciarán Frawley coming in for Tommy O’Brien, who suffered an ACL injury this week and is out for the rest of the season.

Cian Healy and Jimmy O'Brien, who will make his 50th appearance for the province, both came through their return-to-play protocols with no issues after undergoing head injury assessments against the Premiership leaders.

"Look at the quality of Leinster's breakdown work... Leinster have brought their breakdown skills to a different level." 💪

As do Ross Molony and James Ryan, who came through his return from injury with no issues last weekend.

Caelan Doris, Josh van der Flier, a try-scorer against Leicester, and Jack Conan are once again Cullen's choice in the back row.

Toulouse, meanwhile, have made three changes to their team with wing Juan Cruz Mallia, who was sent off in their last-16 loss to Ulster, coming in for Dimitri Delibes.

Prop Cyril Baille replaces Rodrigue Neti in the front row, while Anthony Jelonch comes in for Thibaud Flament in the back row.

Follow Leinster v Toulouse (Saturday, 3pm) in the Champions Cup semi-final with our live blog on RTÉ.ie/Sport and the RTÉ News app or listen on RTÉ Radio 1 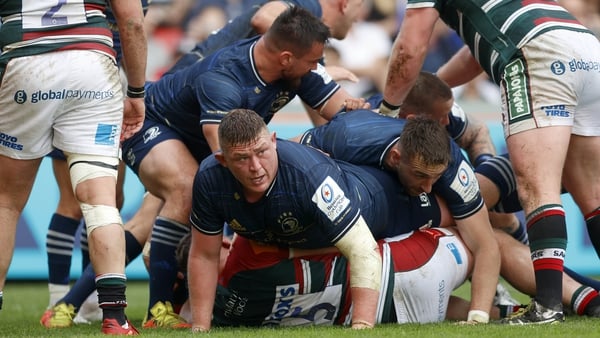