It was a contest that felt more or less over by half-time as tries from Josh van der Flier and Robbie Henshaw helped Leo Cullen's side establish a 20-0 lead, scrum-half Jamison Gibson-Park in mesmerising form.

This was the first time in three years Leicester had been kept scoreless by the time the interval arrived as the foundations were laid for the demise of their unbeaten home record this season.

However, a Tigers uprising followed with Chris Ashton finishing a beautifully taken try - his 41st in Europe - but their lung-busting effort was not matched by an ability to threaten the line as Leinster set up a semi-final against Munster's shootout conquerors Toulouse next weekend.

The Tigers' fire was evident as they tore into the visitors when able to in the opening quarter, but Leinster were smarter and also displayed extra class in attack.

It was brute strength rather than ingenuity that delivered the opening two tries, however, with Josh van der Flier surging over from the back of a line-out before Robbie Henshaw added a second following a succession of drives.

Johnny Sexton landed both conversions to compliment his earlier penalty and when James Lowe motored down the left wing to renew the attack, it started to look bleak for Leicester.

Trailing 17-0, they were unable to get their hands on the ball and when George Ford was able to launch the backline, his snatched pass to Harry Potter was spilt forward by the wing.

The influence of scrum-half Gibson-Park was stamped all over Leinster's play but the momentum of his pack was making life easy, even in the face of some feverish Tigers defence.

Sexton landed another three points and although the match began to sag beneath the weight of kicking, the first half at least finished with Ashton chasing down a half-chance that was headed off by Hugo Keenan.

Ashton struck six minutes after the interval when he was sent over by Ford as Leicester staged a fightback roared on by a near sell-out crowd whose hopes had been rekindled.

Nemani Nadolo was held up over the whitewash as the assault resumed but Leinster defended manfully and almost scored an opportunist try, only for Jasper Wiese to come to the rescue when Potter attempted an ill-advised kick.

Replacement fly-half Ross Byrne extended the lead to 23-7 and while replacement hooker Nic Dolly completed a maul try in the final minute, the result had long since been settled.

In France, La Rochelle booked their place in the semi-finals with a 31-19 win over Montpellier at the Stade Marcel Deflandre.

They will face either Top 14 rivals Racing 92 or Sale Sharks. 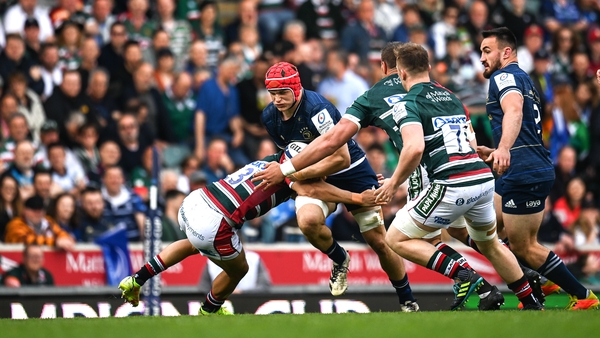